Hannah Greene and Arbor McRoberts create some eye-popping art that will likely hang in a renowned gallery someday soon. They can rightfully declare that their earliest works were first displayed on the Clubhouse wall at Gilda’s Club Middle Tennessee in Midtown Nashville, which provides support and other essential programs for cancer patients of all ages, free of charge.

Budding young artists Greene, now 21, and McRoberts, 15, could easily be termed beneficiaries of the Gilda’s Club expressive arts workshops as well as the organization’s numerous support and networking groups. Both have battled cancer from a young age and are currently in post-treatment phases. 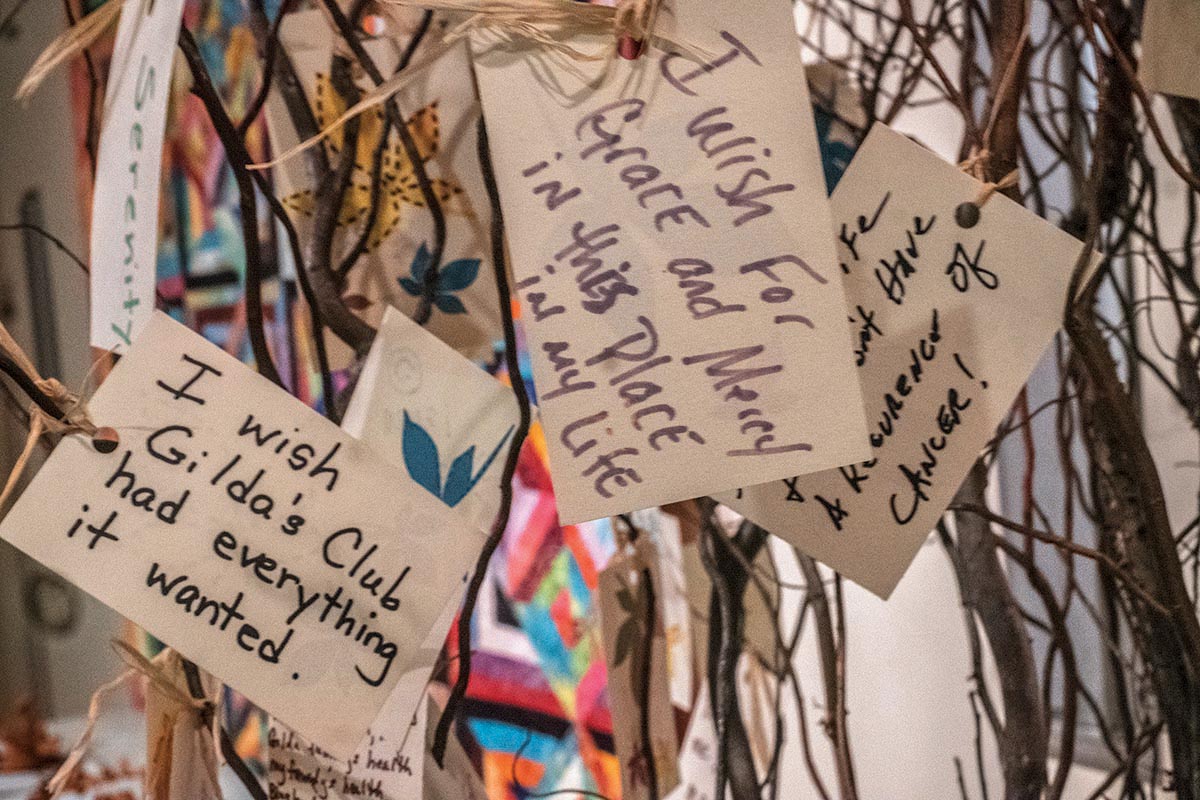 “When you’re going through a rough period, whether you’re four years old or in your teen years, it’s that place where you have that family that will listen to you and is very caring and non-judgmental. It gives you a sense of hope.”

Greene’s talent has already been recognized by the Wilson County Fair, which chose her art for the official fair poster in 2012. McRoberts, who works mainly with markers, finds his inspiration in the mediums of street art, urban art, and graffiti. Their stories serve as literal living proof of the link between self-expression and dealing with a devastating disease.

Megan Ingram Forshey, Program Manager at Gilda’s Club, is totally on board with the concept of art as therapy. “There is a correlation,” Forshey says. “A big part of what we’re doing has always been expressive art.” That is especially crucial for the Gilda’s Club teen population, in Forshey’s view. “When expressing feelings just through discussion is difficult, art provides that outlet that is so helpful and important, even more so for teens than your average adult,” she assesses. “A lot of times, people find it hard to put into words what they’re going through. Sometimes, they can express that through any kind of art modality. And often, when they get their hands busy, they get their mouths busy as well, so they start to tell their stories and support each other in a non-traditional support environment.”

Twice a month on Monday evenings, Gilda’s Club Middle Tennessee hosts a support group, Been There Done That, specifically for teens that have been diagnosed with cancer. “That group is where Hannah and Arbor processed much of their experience with the help of multiple different types of artistic expression,” Forshey explains. “The art becomes the expression of the cancer experience itself in some cases. But at other times, it simply serves as comfort and a distraction of sorts so that some important and difficult conversations can be had in a group setting.” 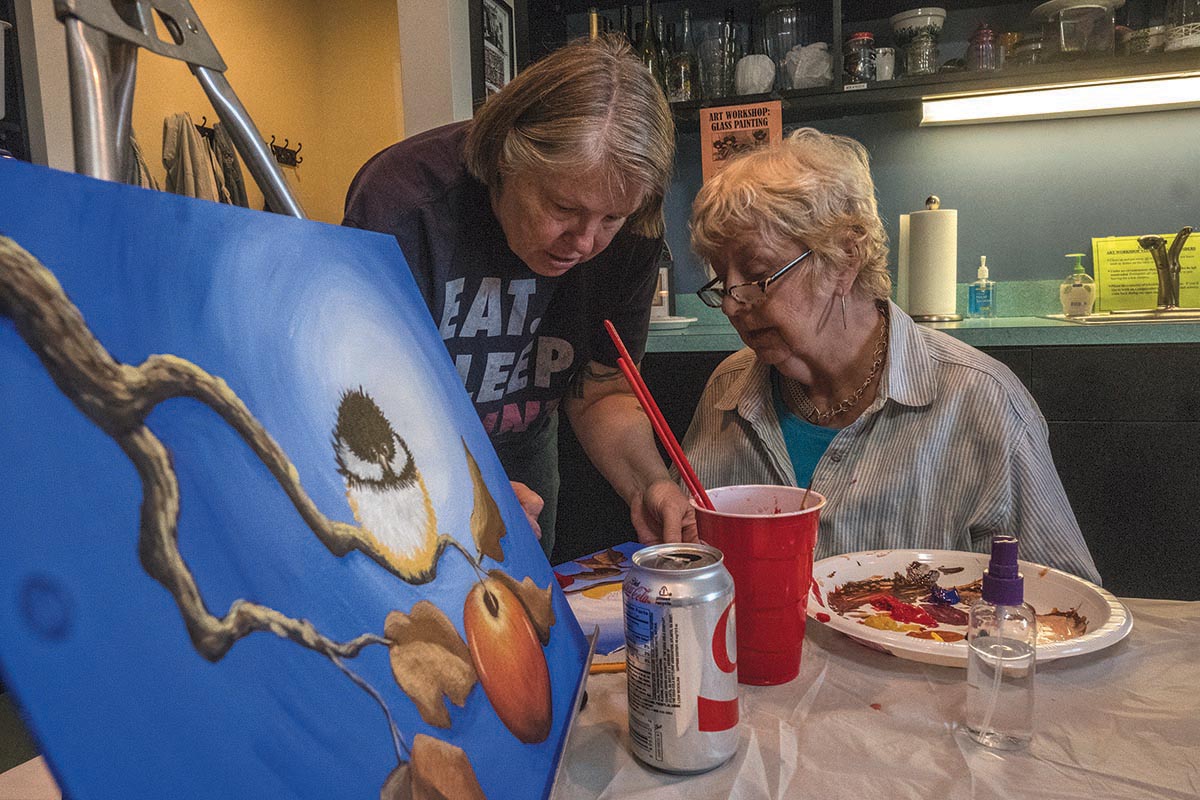 The Gilda’s Club expressive arts programs are led by volunteers who share plenty of skill and experience. “Our volunteers come to us through a variety of ways,” Forshey says. “Some hear about us through our members and reach out to volunteer in their specific area of expertise.” Often, the patients themselves will inquire about a specific class, and Gilda’s Club will seek out possible instructors at their request. The arts program has grown exponentially with the number of volunteers. “‘We opened our doors in 1998, and we have steadily added new volunteers and classes,” Forshey notes. “In the beginning, we had just a handful of volunteers.” Over nearly twenty years, that number has reached into the hundreds.

The workshops run by the volunteers prove equally varied. “We offer all sorts of arts,” Forshey says. “We have clay workshops, acrylics, watercolors. Everything is group oriented.” Forshey adds that the workshop classes are essentially beginner level, with no prior experience necessary. “And we provide all the materials needed to participate,” she says. 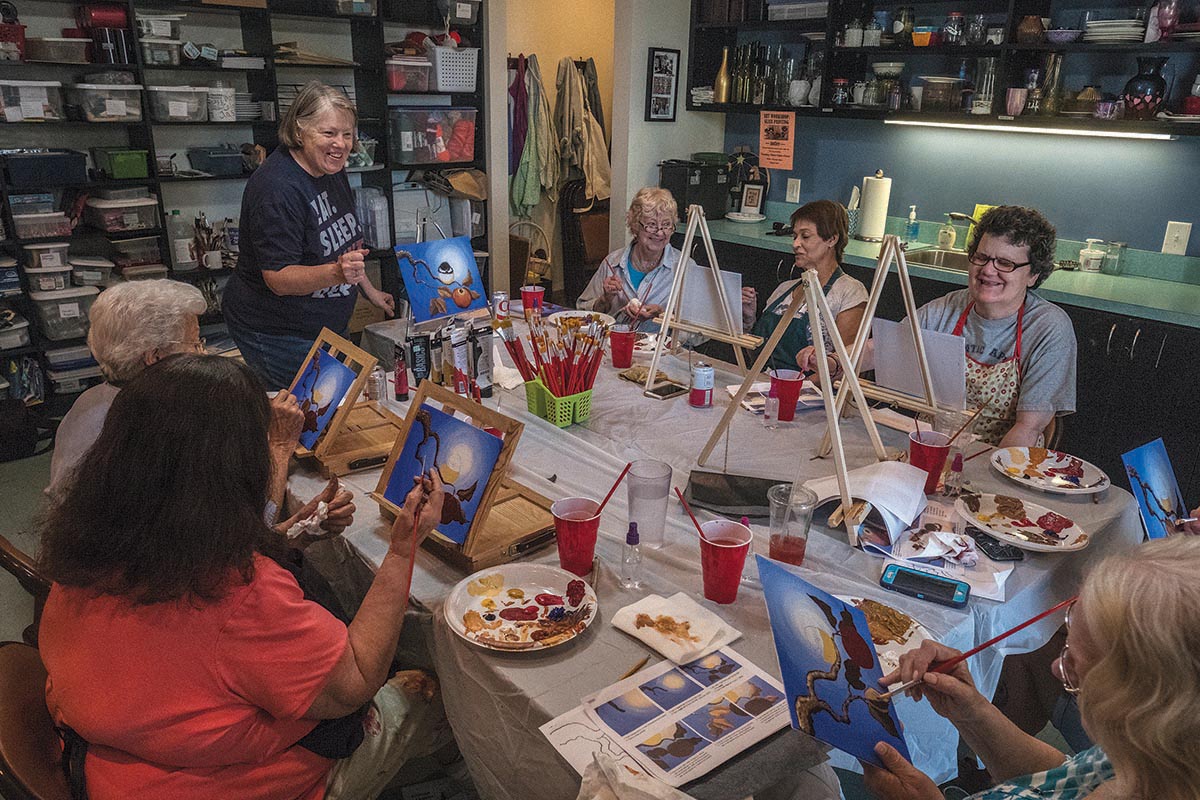 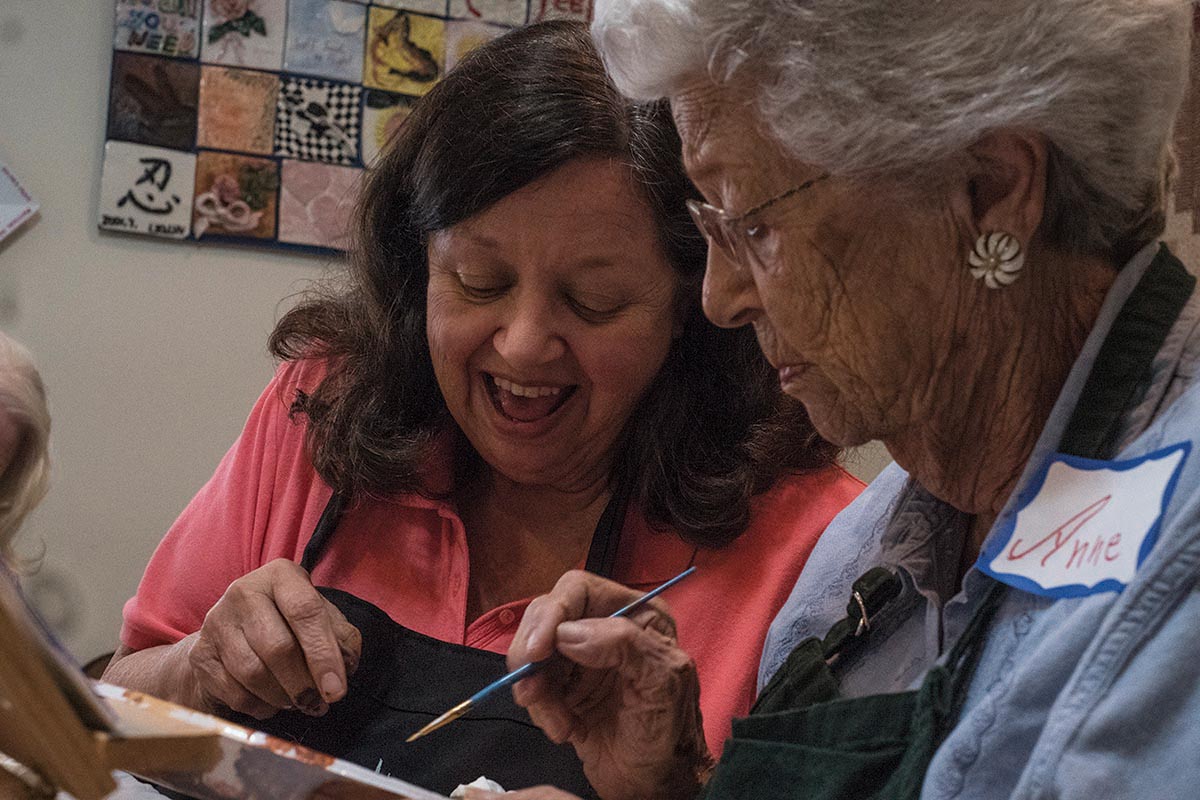 For Hannah Greene, the expressive art portion of the Gilda’s Club program became a true lifeline. She was first diagnosed around the age of four and will freely admit that she became almost completely non-verbal, at least for a time, a far cry from her present candid and insightful manner. “I was already interested in drawing because my uncle was a cartoonist for a newspaper in Florida, and he would teach me how to draw,” Greene recalls. “When I got diagnosed, drawing was a good outlet to express my emotions because I went through a period where I stopped talking for a little while.”

She harkens back to a picture in one of her early sketchbooks, spawned from the moment she first caught a glimpse of an MRI machine. “I thought it was a machine to cut my head off,” Greene says, managing a wry, crooked smile. “So I drew it to look like a guillotine.” During her treatment periods, Greene began to further her interests in drawing through the Gilda’s Club art programs, where she received valuable instruction and support. “I didn’t have other things to do, so I drew a lot,” she says. “I started coming here, and it was very helpful to me. Then I became interested in painting somewhere around junior high, and that has grown since then. I have tried to broaden my horizons, so I like to work in all forms.”

Like his counterpart Greene, McRoberts picked up drawing at an early age. He has developed a bold, striking style inspired by Nashville’s street scenes, preferring markers to traditional pen-and-ink and paintbrush. 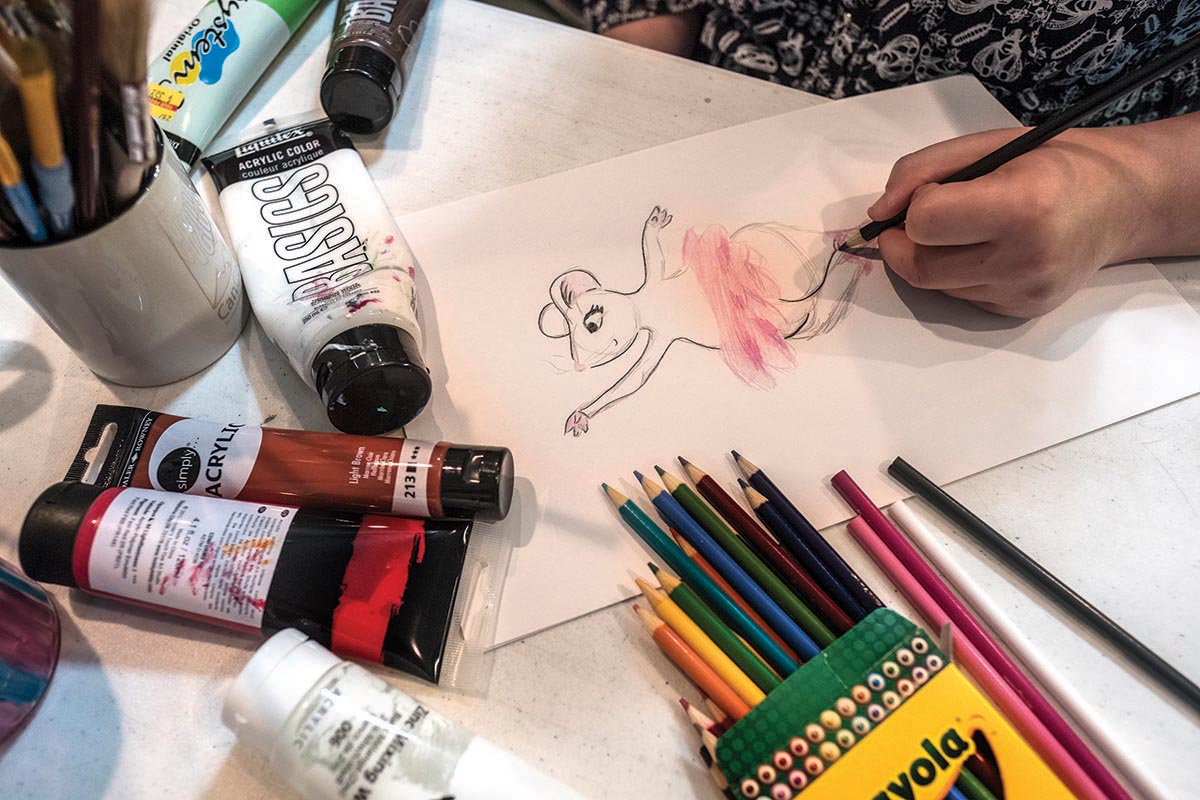 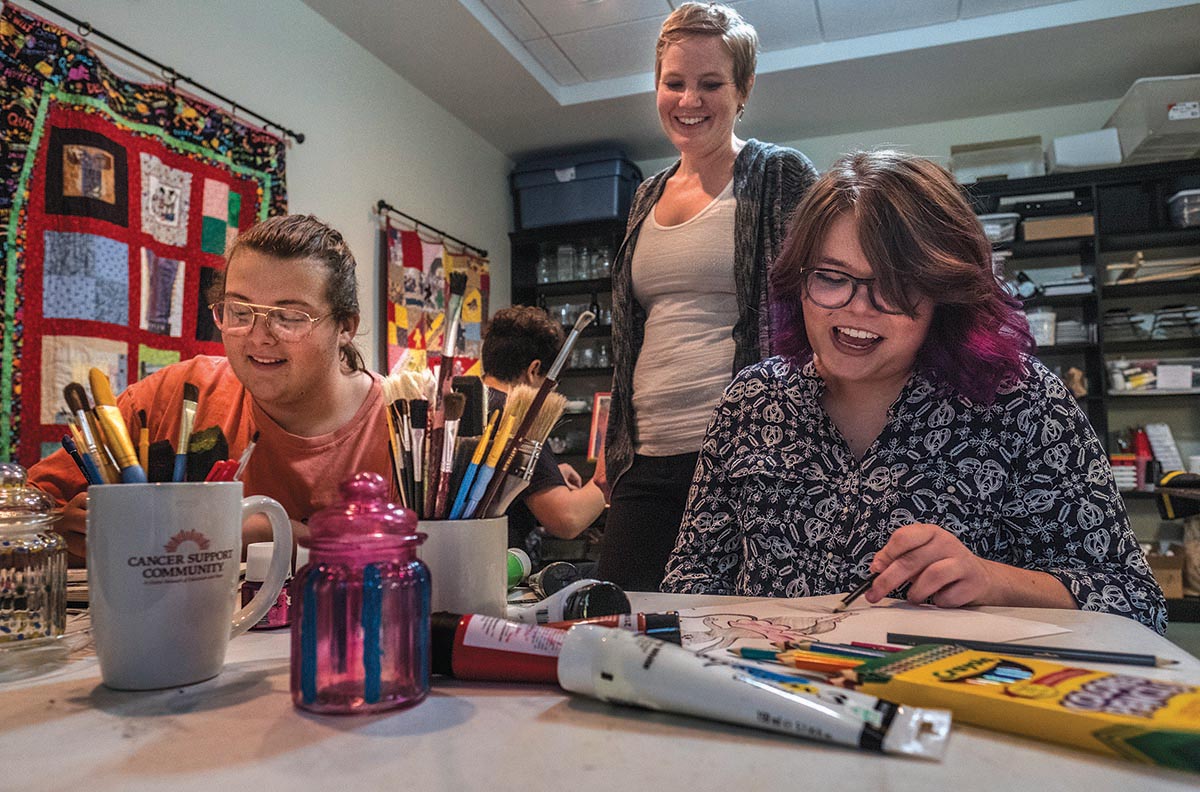 “I was diagnosed at 10, but I was drawing a lot before that,” he says. “My interest in drawing came from being in Nashville and seeing the artwork all over the streets and in the alleys. I really want to be part of that.” As McRoberts details his influences, he speaks with a focused outlook that seems wiser than his still-young age might indicate. “My influences came from watching cartoons and reading comic books and my dad being an art professor,” he explains. “And I read books by philosophers and historians just to get an understanding of how other people’s brains work.” 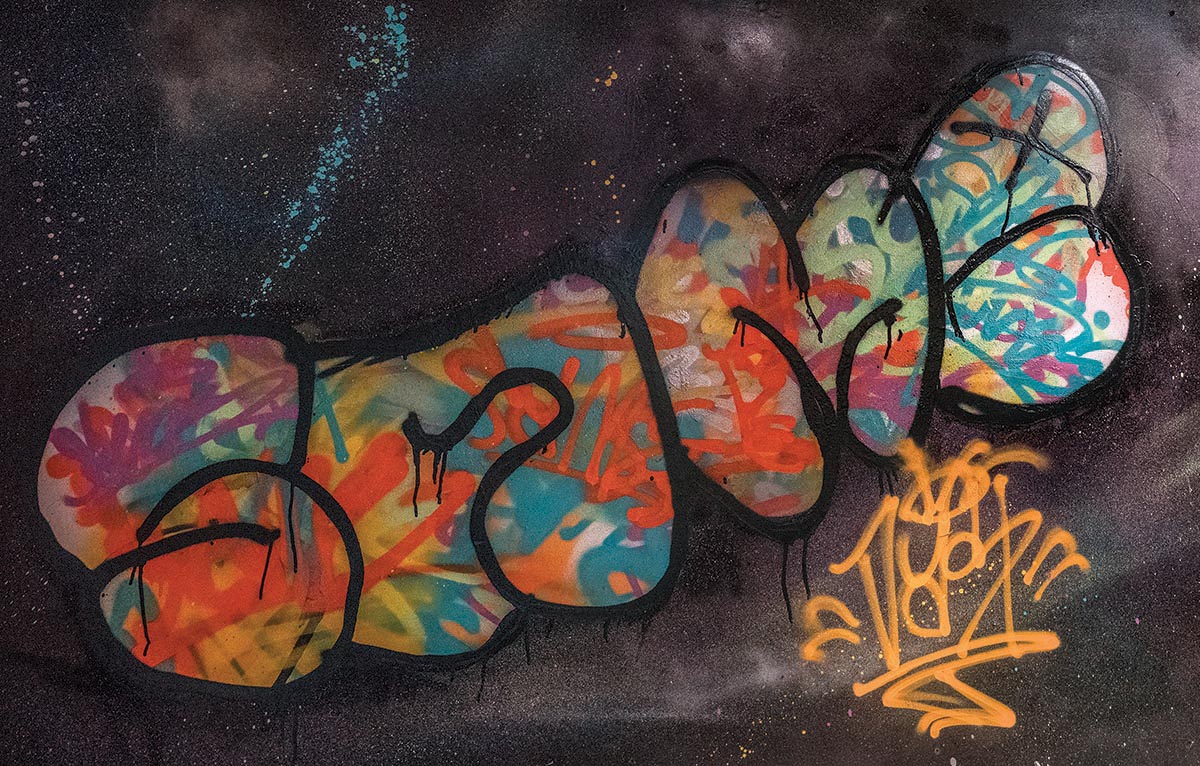 During her toughest times, Greene uncovered a “comfort blanket” in the caring environment of Gilda’s Club. “When you’re going through a rough period, whether you’re four years old or in your teen years,” she says before a thoughtful pause, “it’s that place where you have that family that will listen to you and is very caring and non-judgmental. It gives you a sense of hope.” Along with that, a place to pursue your dreams. To learn more about Gilda’s Club Middle Tennessee, please visit www.gildasclubmiddletn.org.