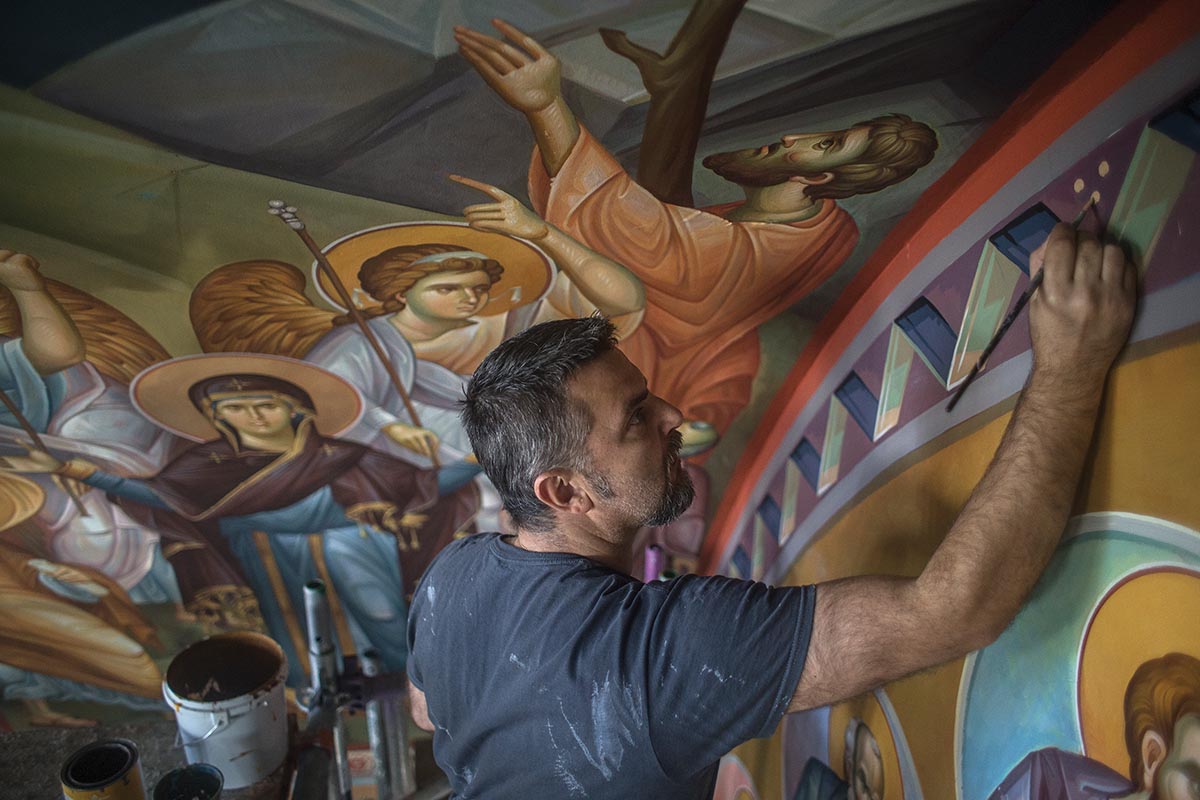 The Greek proverb says, “One minute of patience, ten years of peace.” Imagine what 100 years of patience brings.

Nashville’s Holy Trinity Greek Orthodox Church is, at last, being adorned with the exquisite iconography its founding families saved, sacrificed, and prayed for.

Working high inside a tangle of scaffolding, artist Themis Petrou and his small crew from Athens are transforming an already stunning sanctuary into something other-worldly. And that is precisely the intention of Orthodox iconography. Church leaders explain, “The icon is not merely decorative; it signifies the presence of the individual depicted . . . icons are like a window linking heaven and earth.”

To coincide with a long-planned Centennial celebration, the families of Holy Trinity solicited sample work from several leading iconographers. Then they narrowed the field. The unanimous choice was Themis. Father Gregory Honholt says his work “spoke” to the church in its detail, authenticity, and spirit. 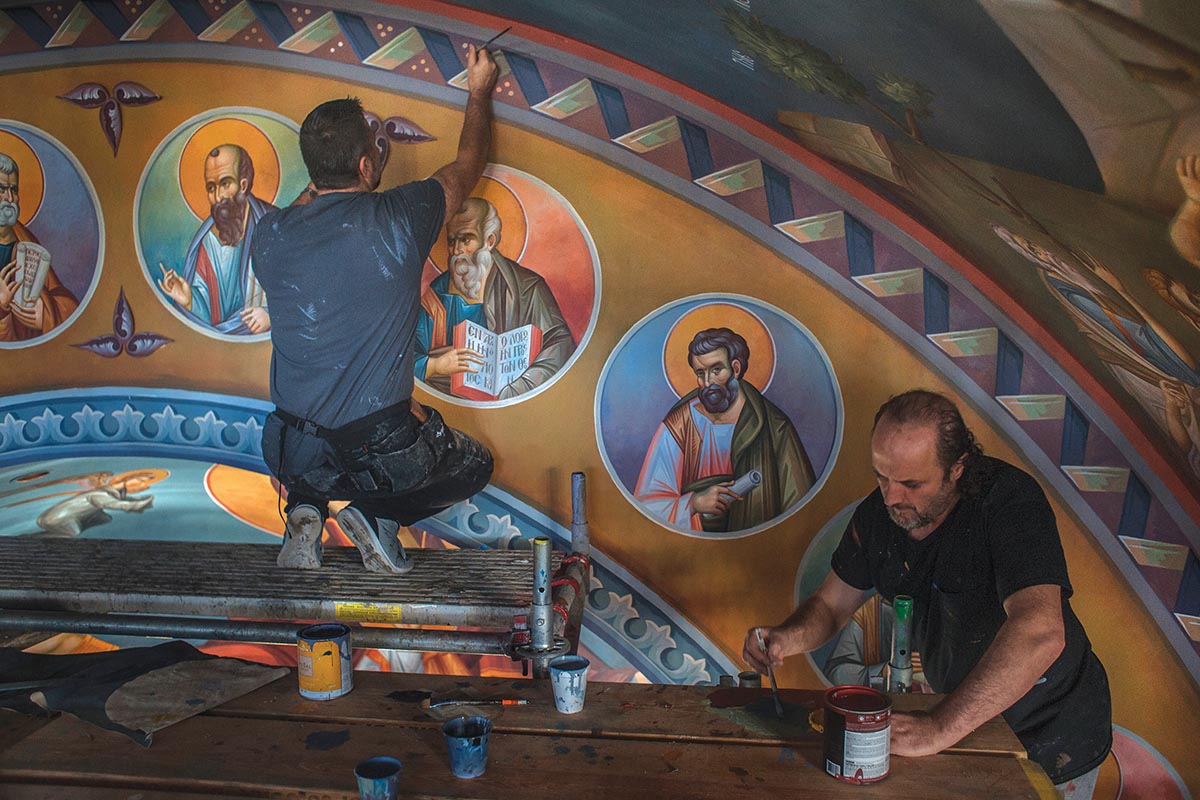 Over the course of several weeks, the icons, on large sheets of canvas, were applied, smoothed, blended, and integrated on the walls, then finished with hand painting and lettering. Much of the work was done after dark, high in the air. (Think Michelangelo and The Agony and the Ecstasy.) It is 21st-century art, yet it exudes the color and craft of timeless antiquity.

Holy Trinity is not the first American church project for Themis Petrou, and his work is widely acclaimed throughout Greece. For the congregation, it has been divinely directed. For several decades the building itself wasn’t ready. Longtime parishioner and former TV news anchor Chris [Clark] Botsaris says troublesome leaks from the complicated Byzantine tiled roofline caused water “intrusion.” Had they been installed too soon, priceless images might have been badly damaged. 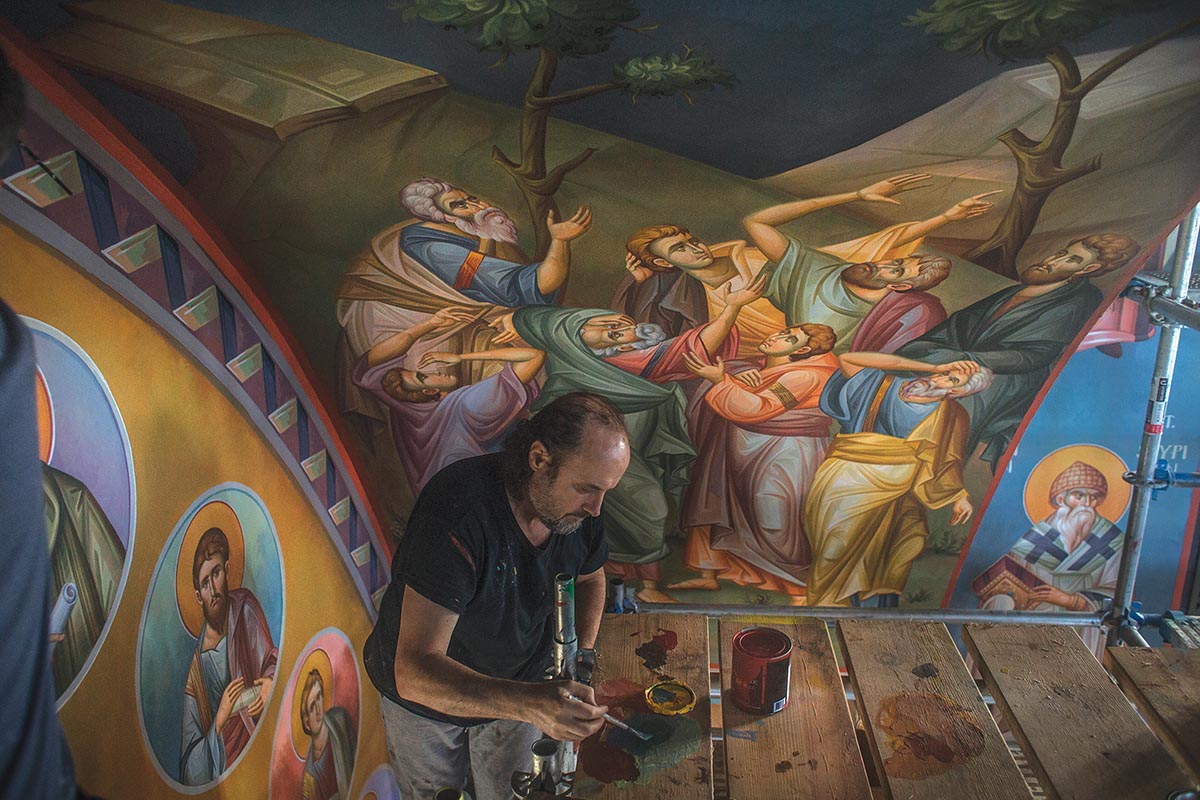 As we go to press, the work is not yet complete. But the dream certainly is. Holy Trinity, the Byzantine treasure nicknamed the “miracle on Franklin Road,” reflects the glory of God like never before.