The origin of the word “tango” seems lost in the mists of time, but it surely emerged in the amalgamation of African and Spanish cultures in the La Plata area (Argentina and Uruguay) of South America. Although in its earliest use the tango was closely related to the Cuban habanera, by the 20th century the music and dance as we now know it had emerged from the arrabales (suburbs) and spread to the barrios (slums) of Buenos Aires. As a couple’s dance, it is considered to be a sexualized and stylized expression of machismo culture in the male’s stance of confidence, danger, and sexual optimism, constantly contrasted with the passive, if not oppressed, female partner. 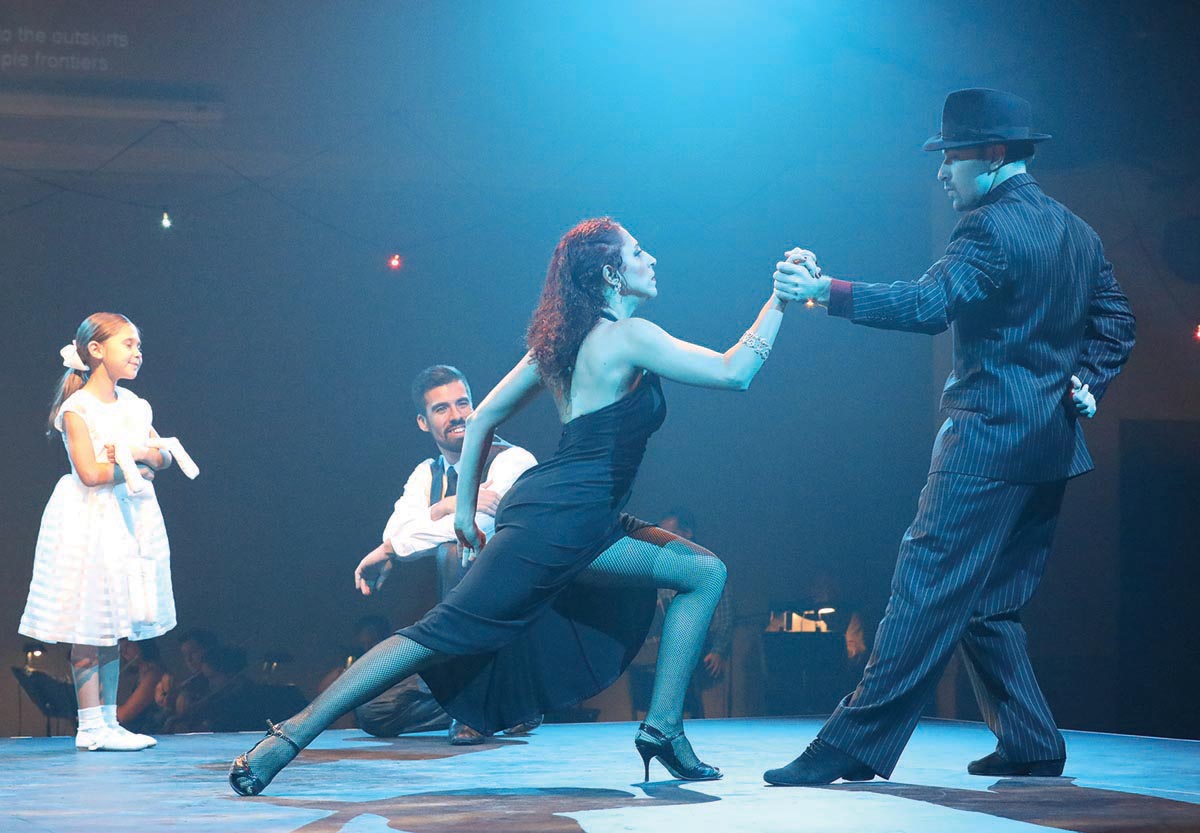 It was with this history in mind that on November 10–12 the Nashville Opera gave a steamy, sold-out, and wait-listed production of Maria de Buenos Aires, Ástor Piazzolla’s “little tango opera” (tango operita). The production was held in a transformed Noah Liff Opera Center, featuring an immersive cabaret setting complete with cocktails and candlelight.

Written in 1968, Piazzolla’s work sets a modern, surrealist libretto by the Uruguayan-Argentinian poet Horacio Ferrer. Although Ferrer’s narrative is not always clear, the symbolic imagery, a mix of religious and nostalgic images filtered through the harsh realities of life in the barrio, can be beautiful and quite poignant. As such, the title character is simultaneously a heroine, a prostitute, an embodiment of tango, a Christ figure, and a Madonna figure who was, as the Payador informs us, “ . . . born on a day when God was drunk; that’s why three crooked nails hurt in her voice . . . She was born with a curse in her voice!”

Nashville did very well by casting the extraordinarily charismatic Mexican mezzo-soprano Cassandra Zoé Velasco for the title role. Her instrument exuded a dramatic warmth with a sensitive but exacting intonation. In contrast to Maria, the character of the Payador is a “gaucho itinerant singer” that functions as a dangerous poet and narrator throughout the work. He was played with zeal by baritone Luis Alejandro Orozoco, a veteran of the part. Baritone Luis Ledesma played a remarkably creepy El Duende, a kind of spirit goblin that accompanies Maria throughout her life.

The first act deals primarily with Maria’s life, culminating with her death at the hands of a “Chief old thief,” while in the second act she is condemned to hell (which turns out to be Buenos Aires), and she dwells there as a spirit. This act and the opera culminate with her redemption; she becomes pregnant and gives birth to herself, bringing the plot (like Dante’s hell) into a closed circle, except that now Maria’s prayer “Our Maria of Buenos Aires, forgotten art thou amongst women,” has changed to “…portent art thou amongst women.”

If Ferrer’s libretto is circular, it is perfectly written to accommodate Piazzolla’s score, which features one dance after the other and each impossibly more beautiful than the last. Piazzolla’s specialized chamber ensemble includes the authentic instruments of tango, a 38-button accordion called a bandoneon, a violin, flute, and guitar. For this production, Nashville Opera brought in Rodolfo Zanetti to perform on the bandoneon, and his performance was spectacular. Particularly in the fifth Scene, the Fuga y misterio, which is a huge fugato featuring a twelve-bar subject in four voices, Zanetti and the ensemble performed with delightful abandon. Music Director Dean Williamson was positively beaming as he led the ensemble through this virtuosic piece. Violinist Christina McGann, Guitarist Paul Brannon, and Flutist Deanna Little also deserve recognition, not only for technical virtuosity (of which there was much) but also for their musicality.

Under John Hoomes’s ingenious staging, the tango becomes more than just a character in Maria’s life; it is a structural component of the society in which she lives. In her youth, it seduces her (as a child she was played beautifully by Zazou France Gray), and as she grows the dance claims her even as she claims it. Anthropomorphized by tango artists Mariela Barufaldi and Jeremías Massera, across the evening Maria is embraced, isolated, ostracized, swindled, comforted, crucified, and redeemed by the tango. 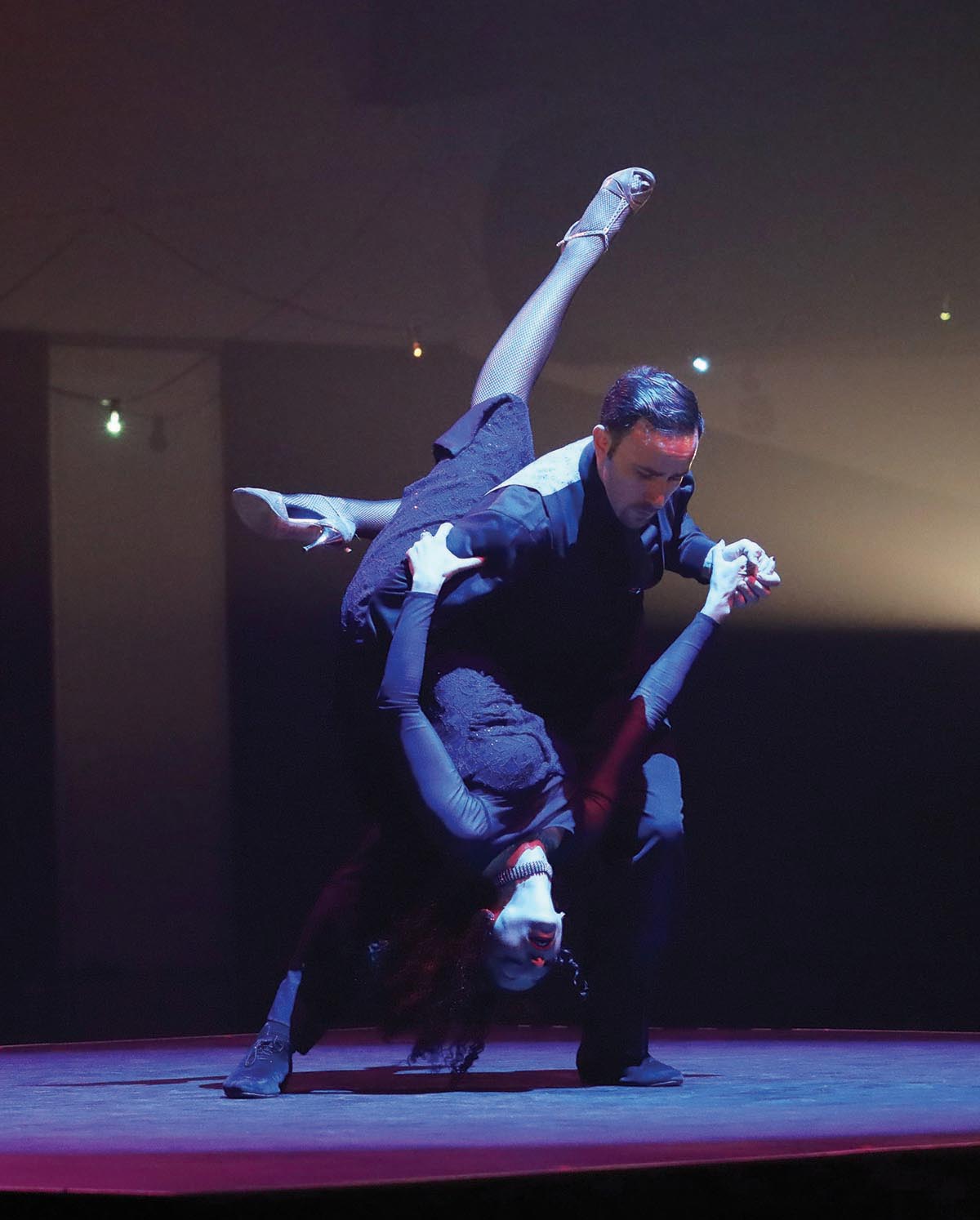 Although she is redeemed at the end, Maria is simultaneously reborn into the same circumstances where she died, closing a never-ending circle of oppression from within the dance, effectively turning a lieto fine into a broader tragedy and moral message—yet another generation is forced to live and die in the face an oppressive, machismo culture. When one considers the almost daily allegations of sexual misconduct committed primarily by male cultural and political leaders, the contemporary, if not timeless, relevance of Ferrer, Piazzolla, and Hoomes’s message is undeniable.

On January 27, Nashville Opera returns with a production of Hercules vs. Vampires at TPAC, which they promise will be “a fantastic night of over-the-top fun.”