“You go along for years knowing something is wrong, then suddenly you discover that you’re as transparent as air. At first you tell yourself that it’s all a dirty joke, or that it’s due to the ‘political situation’. But deep down you come to suspect that you’re yourself to blame, and you stand naked and shivering before the millions of eyes who look through you unseeingly.”

Frist Center for the Visual Arts through June 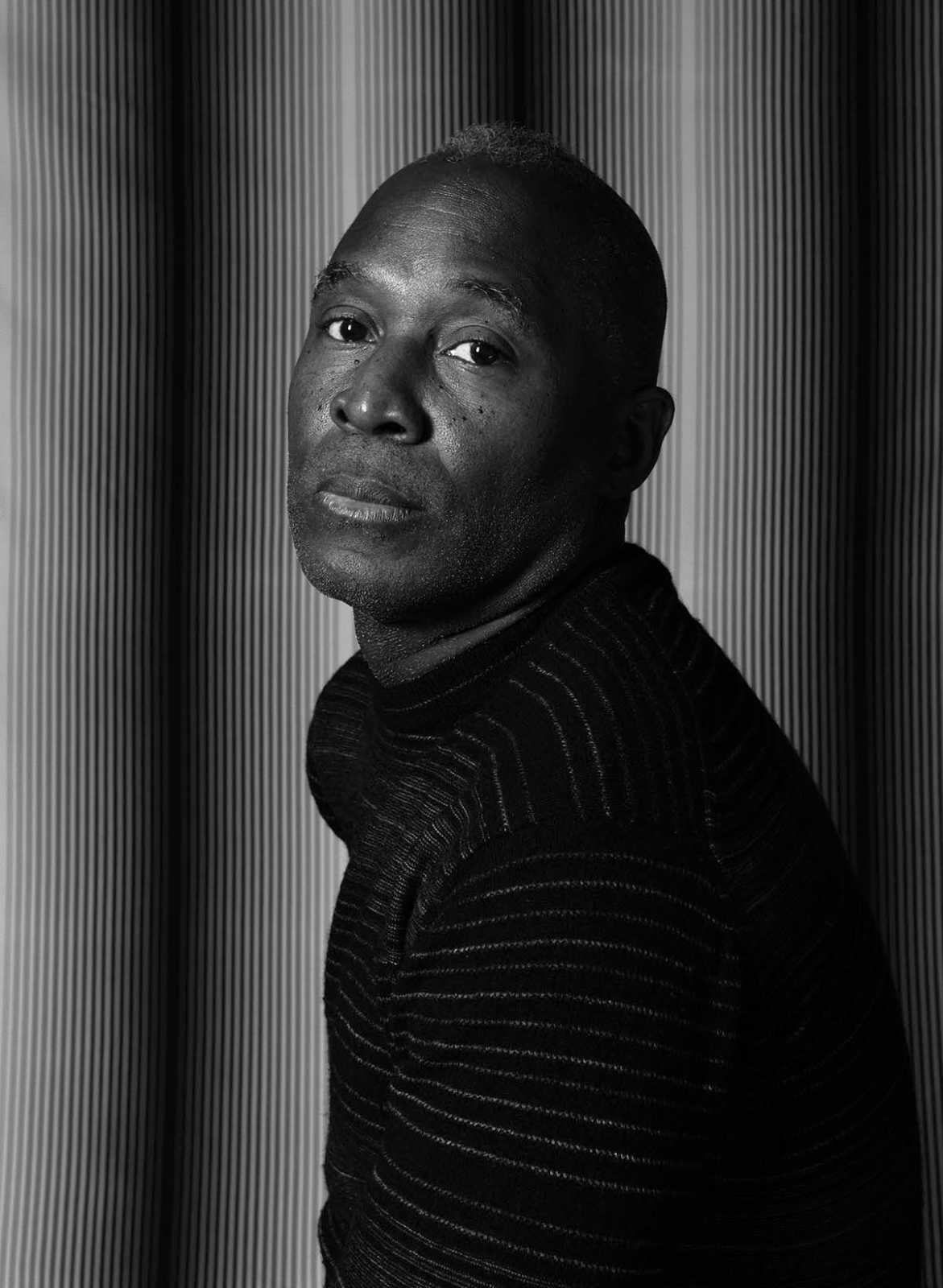 An imposing human-like form stands erect on a white pedestal. It is clad in an impressive two-piece ensemble whose surface has been consummately adorned with an array of silvered reflective buttons. The arms and feet of the garment’s inhabitant are shrouded in elongated fabric, its face a massive flat, circular form whose dark fibrous facing swirls hypnotically. This extravagant material composition completely cloaks the armature, or figure, which occupies the form so bodily—rendering an encounter with this flamboyant exterior decidedly psychological.

This ambiguous sculptural form, Soundsuit (2017) by artist Nick Cave, is one of several works included in Feat. at the Frist Center for the Visual Arts, a survey exhibition of phantasmagoric sculptural works and garments by Cave which quietly romanticize material identity. The Chicago-based artist is best known for his sensorial and absurdist wearable assemblages comprised of repurposed objects and craft materials—referred to by the artist as “soundsuits”—whose formal impetus is as a type of armor against racially motivated police brutality. Feat. is a continued curatorial approximation of Cave’s investigation into the preciousness of materiality and its latent function to simultaneously conceal and reveal.

In this exhibition, Cave has eschewed former sensorial displays, electing instead for a quieter and less polemic trajectory of works constructed over the last decade. Rescue (2014) figures a ceramic basset hound and vintage settee canopied beneath a net of metal flowers and ceramic birds, a material thematic repeated in the nesting synthetic headpiece of Soundsuit (2012).

This motif is likewise apparent in the four massive wall panels which comprise Wall Relief (2013), a chaotic sculptural detritus of strung crystals, afghan textiles, gramophone components, and disparate porcelain ware, all composed within a densely structural floral framework. A textural embodiment of Cave’s sculptural work, Wall Relief grapples with the material multiplicity of the sculptural Soundsuits but disavows the inherent tension of “concealing” in its immediate disillusioning relationship to the wall.

Notably, more politically urgent works from recent years, such as TM 13, (2015)—a sculptural work which figures a black man in a hooded sweatshirt, who, ensconced in beaded netting, and which was constructed in direct reference to the fatal shooting of unarmed teenager Trayvon Martin in 2012—do not appear. Rather, Cave softly surfaces the visual language of identity politics in earlier works like Untitled (2014), which figures a cast bronze arm extending out from a cacophonous pile of white linen folds, and a Soundsuit from 2012 which employs early African masquerade stylization in the form of sequins and crochet patterning. It is in these works which the black body figures most readily, albeit subtly, and that his implication of weighted material reference quite physically alludes to interior identities.

It is the enigmatic selection of Soundsuits on exhibit in Feat. where Cave’s investigations of material identity is most psychologically tense. Exhibited along a long raised runway in one of the Frist’s more narrow rooms, ten of Cave’s monumental Soundsuits are staggered at various discursive angles. A seemingly hyperbolic assortment of festoons, buttons, beads, wires, ceramic vessels, knitted crochet, pipe cleaners, vintage toys, upholstery, amalgamated thrift items, and icons of collective nostalgia, have been interwoven to form idiosyncratic edifices for human containment. A Soundsuit from 2015, constructed from enameled can lids, shoelaces, plastic beads, and macramé, is one of the more abstract and resplendent suits on display and which digresses quite entirely from the human form beneath. 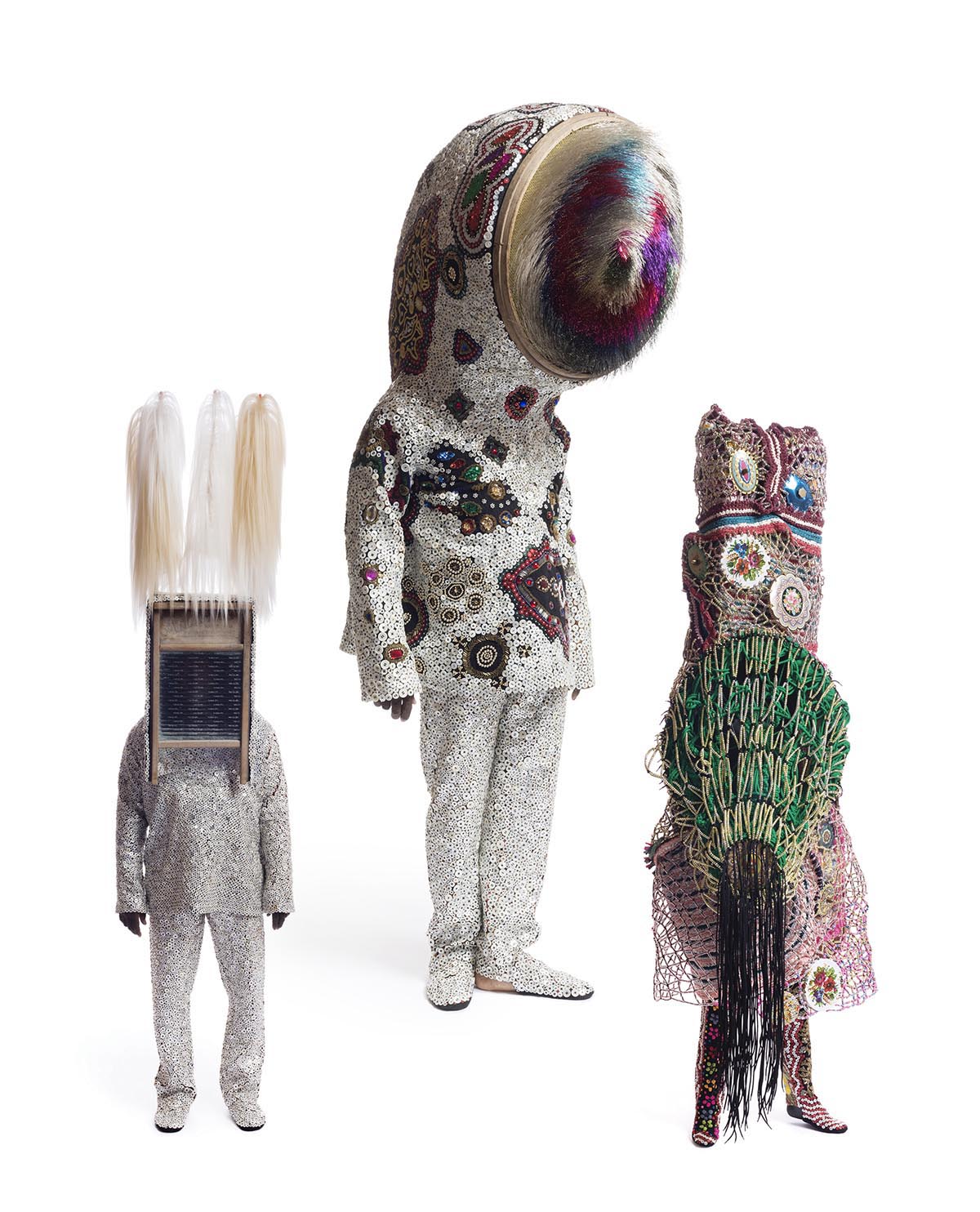 Certainly, despite the suits’ extravagant exterior materiality, the complexity of this work is manifest in the inherent function of a garment—to concurrently conceal and reveal the body. This ideology is iterated concisely in Blot (2012), perhaps one of the more surprising works in the exhibition.

Breaking from the established quietude and object staticity upheld throughout Feat., this video work images a Soundsuit in action. In it, an amorphous figure enveloped in a multi-threaded suit of black raffia—a fiber extracted from palm trees native to tropical Africa and Madagascar—transposes upon itself in the stark whiteness of a single channel projection. The central figure contracts and extends volatilely from the center of the frame, intermittently revealing grasping hands and feet out from the folds of its shaking material vessel. It is not dissimilar in form from a Rorschach blot.

Certainly, the repeated allusion to the necessary occupancy of these works by a body, and their relative lack of ascertainable identity, work well to construct a psychological mystique as to who and why a body might don these garments. Given the known origin of these works as armour for the black body against racially profiled police violence, there is plainly a social provocation. Yet, Feat. in its differentially quiet, still curation does not overtly call to racial injustice as it introduces an experiential element wrought with personal culpability. 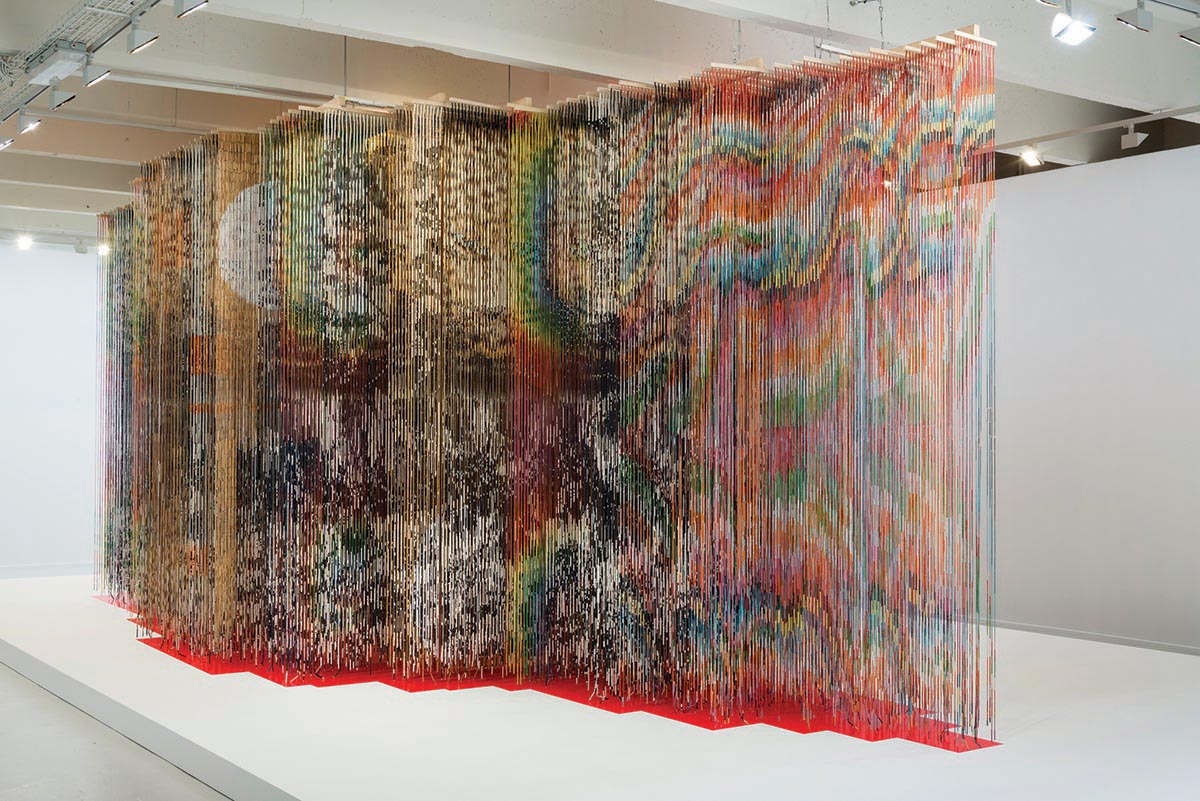 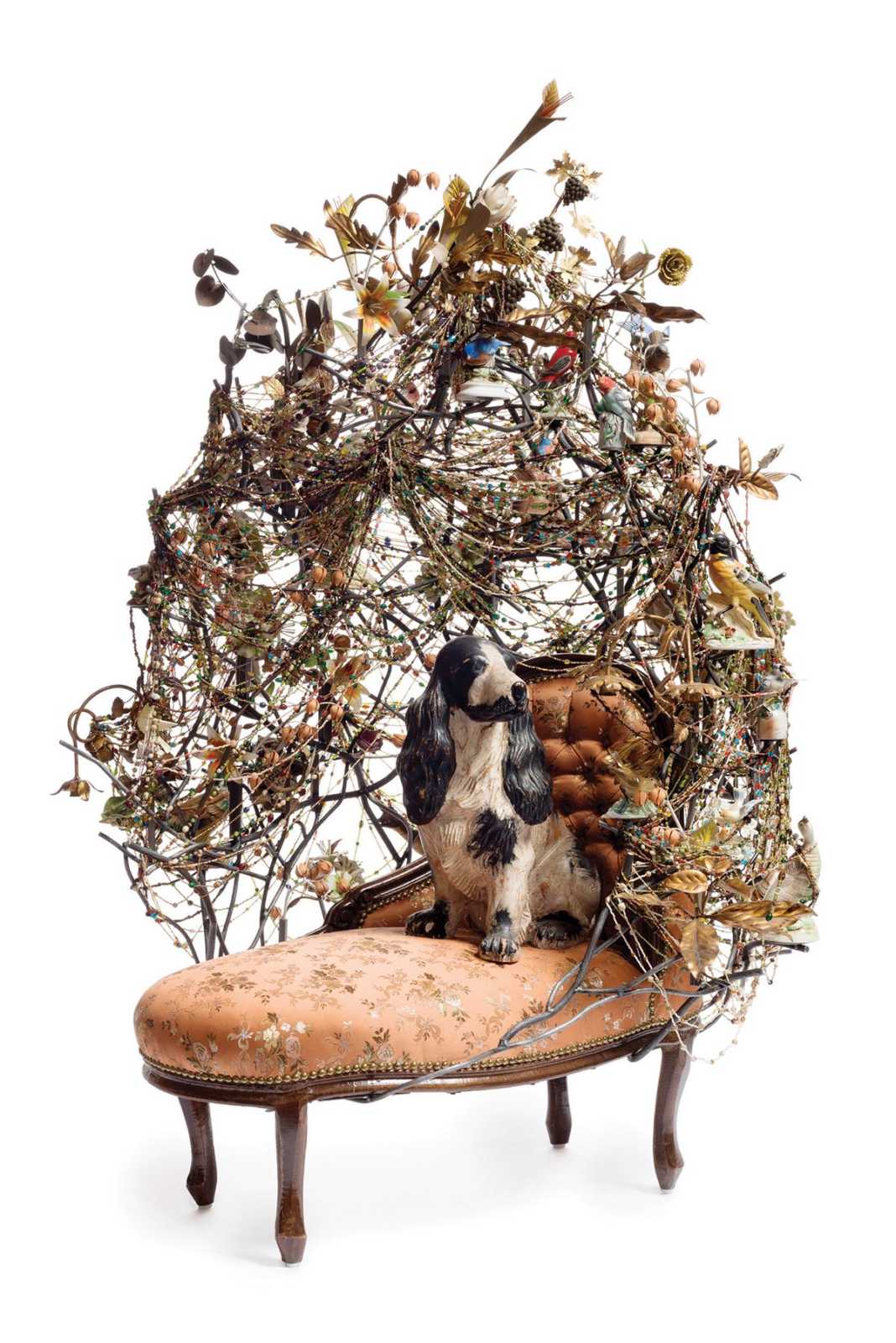 Entering the exhibition, visitors and patrons encounter a large wall affixed with a psychedelic wallpaper culled from a detailed photograph of Cave’s work. Upon it, the title Feat. refracts distorted faces of museum-goers in its mirrored surface. Referent to the abbreviation of “featuring” or a “feat of work,” this reflective introduction demonstrably implicates attendants in an actionable viewing experience whereby notice of the self is a cognizant and accountable instrument antecedent to accessing the work. Feat. is an interrogation of materiality, identity, and the causal relationship of those multitudinous solutions Cave has exhibited for his viewers.

Nick Cave: Feat is on view at the Frist Center for the Visual Arts through June 24, 2018. For more information, please visit www.fristcenter.org. 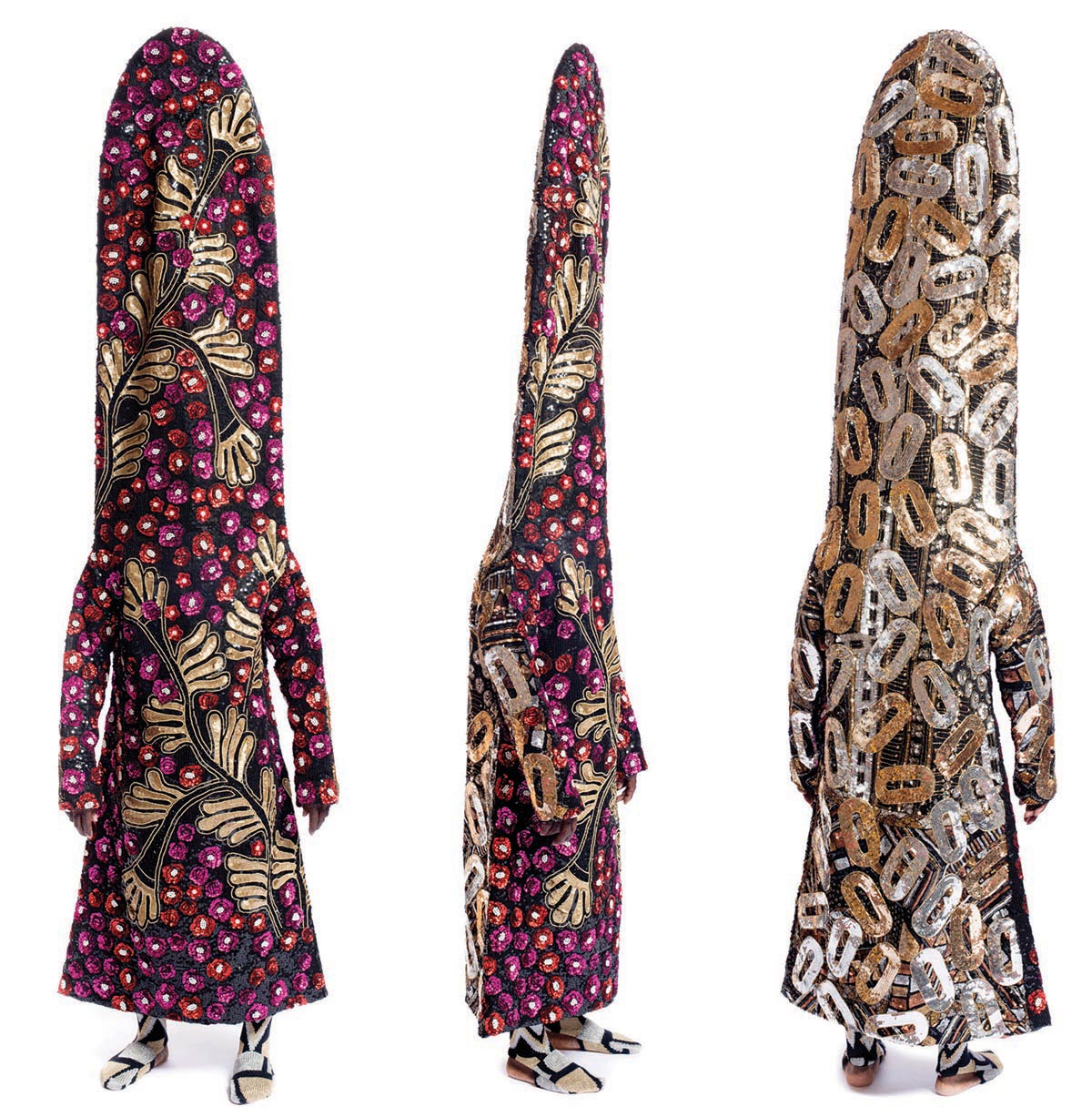 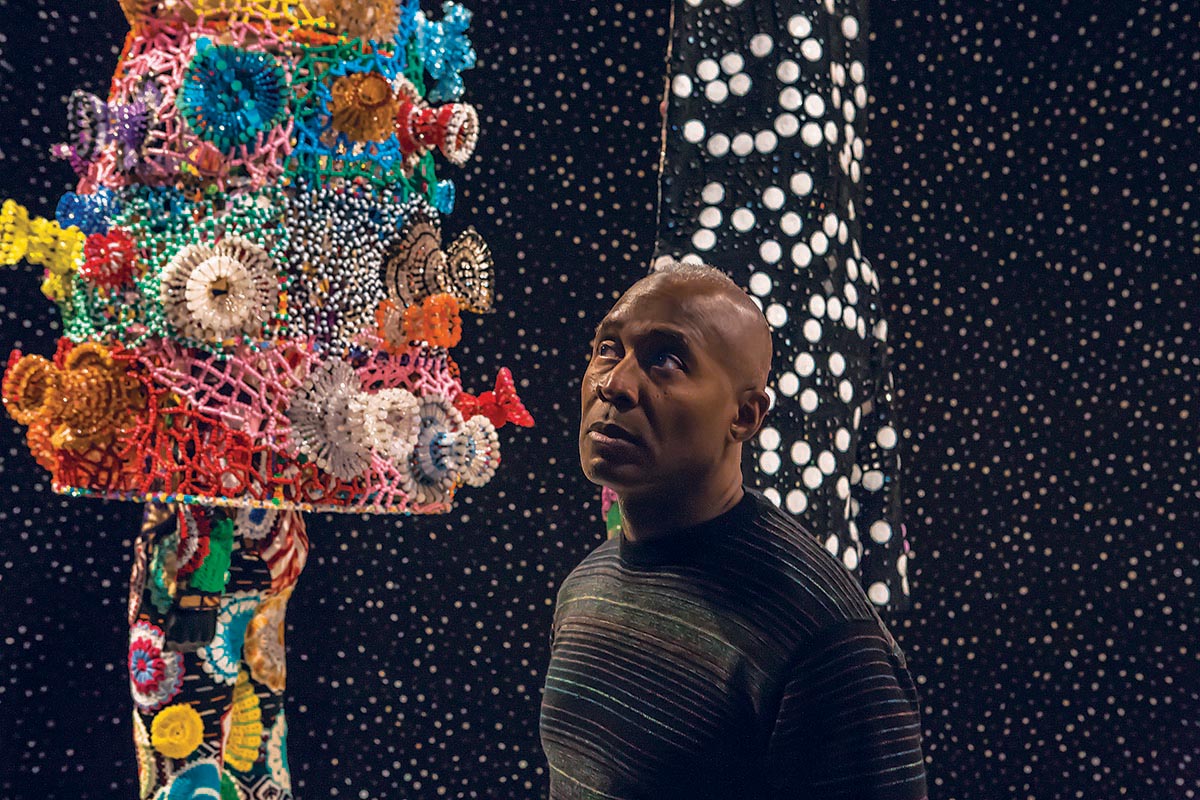