On October 27 and 28 the Nashville Symphony presented a rather eclectic collection of works, Richard Wagner’s Tannhäuser, Tobias Picker’s Opera without Words, and Ludwig van Beethoven’s Piano Concerto No. 3 performed by the internationally acclaimed pianist Yefim Bronfman.

Wagner’s Tannhäuser which premiered in Dresden in 1845 and was his first work in a relatively stable period of his life, features a striking contrast between the Pilgrims’ Chorus, with its beautiful sacred chorale music, and the secular, and much more chromatic, Venusberg music. In this setting, Maestro Guerrero was in his prime, bringing Wagner’s rich orchestration to the fore, but maintaining a nuanced feel for the melodic line—particularly at the triumphant statement of the Pilgrims’ Chorus.

Tobias Picker’s Opera without Words seems to be an experiment to combine his talent for instrumental works (as evidenced by commissions from eminent American orchestras including the Cleveland Orchestra, National Symphony, the New York Philharmonic, Philadelphia Orchestra, and various European ensembles) with his talent for operatic composition (as evidenced by commissions from equally eminent opera companies including Santa Fe Opera (Emmeline), Dallas Opera (Thérèse Raquin), the Metropolitan Opera (An American Tragedy) as well as others. The experiment is like Felix Mendelssohn’s famous Lieder ohne Worte (Songs without Words), except Picker began with a text by librettist Irene Dische and then stripped it from his score once complete.

Unfortunately, while there are some remarkable moments in the score, the result is a kind of puzzle, a search for a purposefully elusive meaning. There are scene titles (Scene I: The Beloved, Scene 2: The Minstrel…) but little to provide a real sense of dramatic narrative. This difficulty is compounded by the fact that it is a contemporary opera and lacks (at least as far as I could tell) the structural articulations and conventional organization of the number opera (aria, duet, finale, etc). Other performances have been described as “Kaleidoscopic” which I think is apt, and in performance the orchestral colors were marvelously rendered. The performance was recorded for commercial release, I honestly hope to listen to it with a score and perhaps learn more about it.

Beethoven’s Concerto No. 3 has long been recognized as a document of Mozart’s influence on Beethoven; it is his one of his latest classical pieces and as such it leans toward his heroic style. Yefim Bronfman, the soloist, is a large, powerful man–Philip Roth described him in the Human Stain: “Yefim Bronfman looks less like the person who is going to play the piano than like the guy who should be moving it.” And while he does make the piano look very small, he approaches Beethoven’s work with a remarkably refined touch and sense of lyricism. In particular, the cadenza and return at the end of the first movement, perfectly balanced by Guerrero, was a revelation. This light touch continued into the playful episodes between statements of the third movement’s fiercely restless rondo theme. And for our ovation, he gave us Chopin in an encore. Overall it was a fantastic evening of experimentation, beauty and virtuosity.

The following weekend, on November 3 and 4 the Nashville Symphony programmed Franz Joseph Haydn’s oratorio Die Schopfung (The Creation), bringing in the English-born specialist in Baroque and Classical music, Maestro Nicholas McGegan, to conduct. Tucker Biddlecombe’s choir was exquisitely prepared and McGegan brought his uniquely English genius for choral music to bear, especially in those numbers that betray the strong influence that Handel had on Haydn. In particular, the beautiful fugue in No. 10, “Awake the Harp” was amazing. However, McGegan did not ignore the symphonic aspects of Haydn’s masterpiece.  The prelude’s depiction of the emergence of order from chaos wasn’t just “awesome,” as they say today, it was awesome in a philosophically informed, 18th century enlightened style.

Soprano Ashley Valentine, as Gabriel, performed with a remarkably delicate, yet precise tone. No. 15 “On Mighty Wings the Eagle Soars Aloft” was wonderful. Tenor Isaiah Bell (Uriel) and Bass Anthony Reed (Raphael) were also in strong form. Reed’s first number, “In the Beginning” was delightful. In all it was a wonderful pair of weekends from the Nashville Symphony. On the 17th they’ll be playing Mendelssohn’s “Scottish” Symphony and Shostakovich’s Violin Concerto Op. 77 with the Grammy winning Italian violinist Augustin Hadelich.

Nashville Symphony’s next concert in on November 17 and 18 with Mendelssohn’s “Scottish” Symphony and Shostakovich’s Violin Concerto performed by violinist Augustin Hadelich. 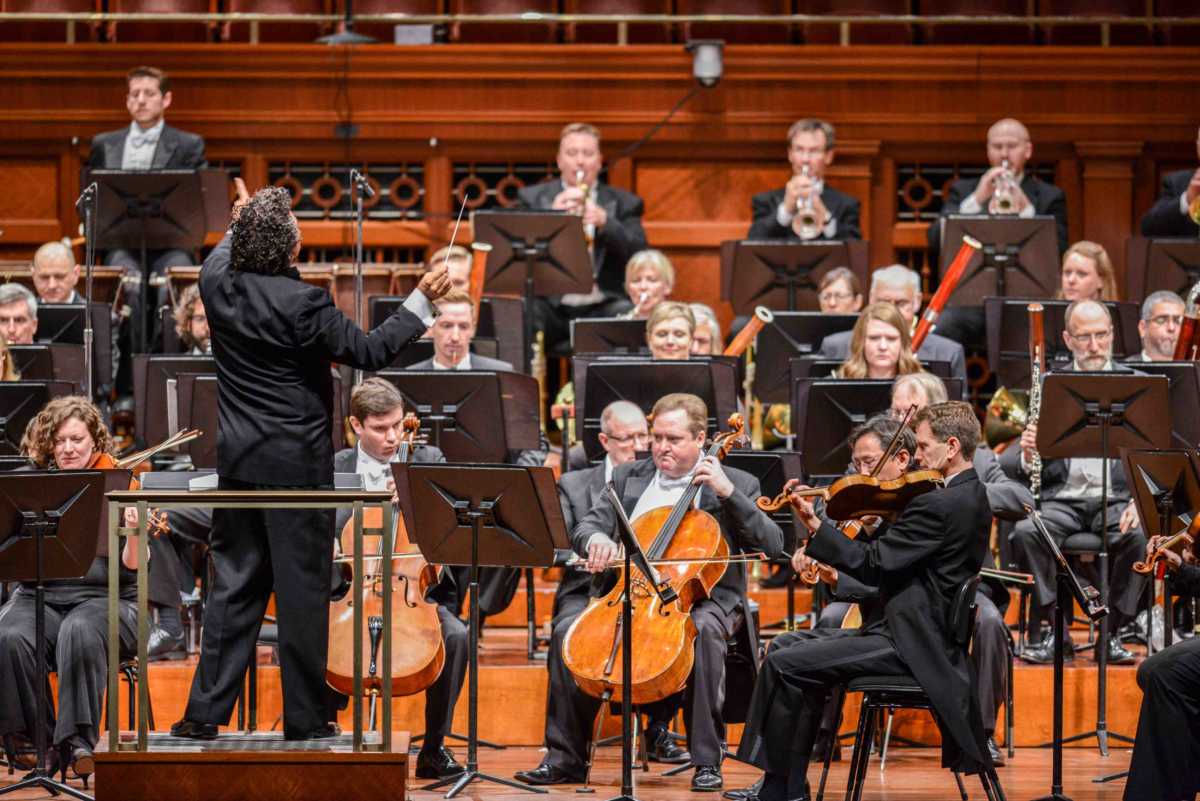