The question has reverberated around Nashville for many years. An exhibit at TSU sheds some light on the elusive Mr. Batey. 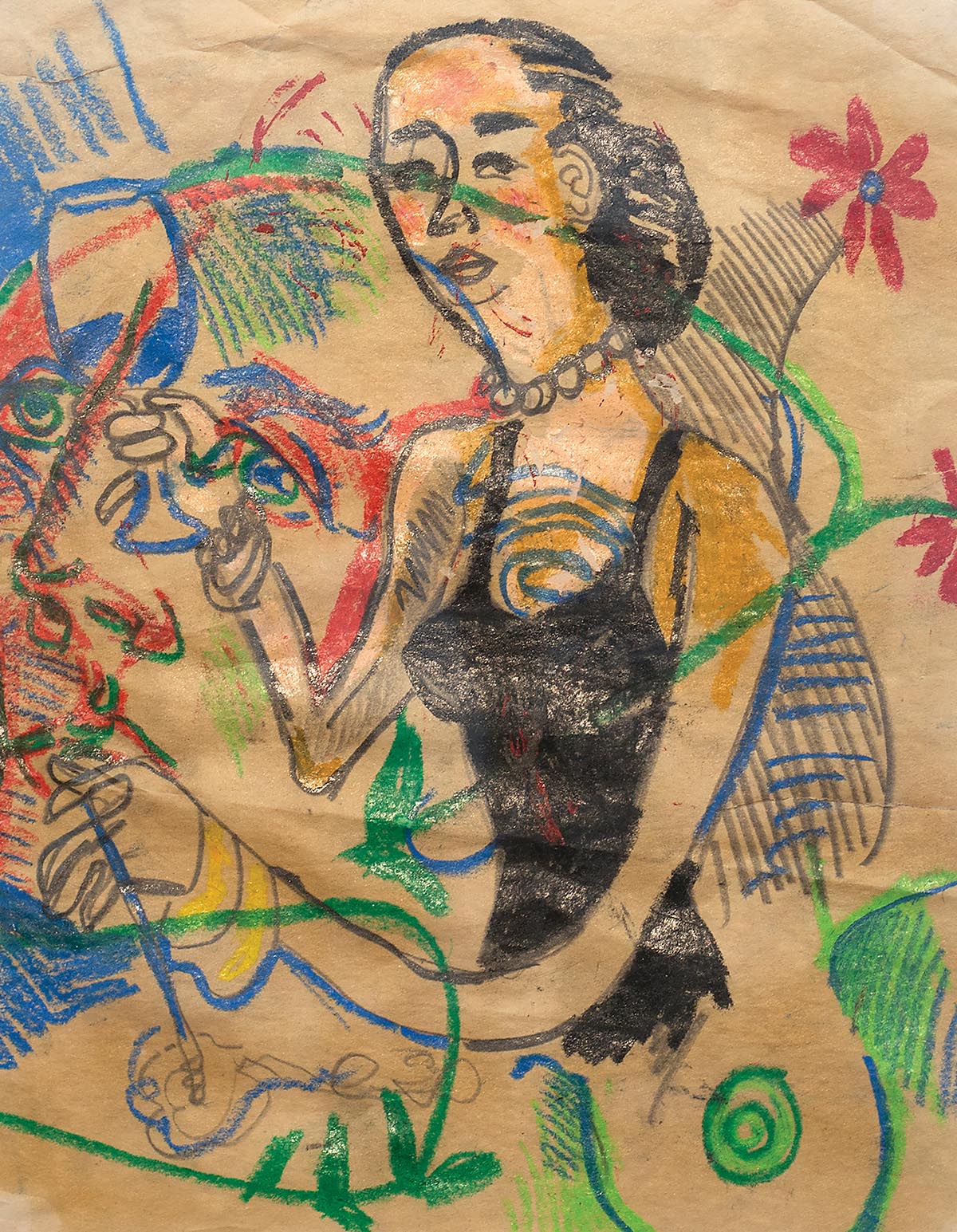 I remember the first time I met Joel Batey. I walked into Plaza Artist Materials and he was behind the counter. I can’t remember exactly what he said, but he had the deepest voice and a warmth like we knew each other already or would always know each other. I ended up working with him at Plaza for approximately six years of my eight-year tenure there. We became good friends.

Fast-forward to the beginning of 2018: I am now Gallery Director for the Art Department at Tennessee State University. In the collection there, I found a large painting of Joel’s, actually one of three. I owned a handful of pieces myself, but this one was earlier work than I had seen before, and I was thrilled to find it. I began talking to others who knew Joel and had collected his work over the years, and I heard repeatedly, “Where is Joel?” and “Is he still in town?”

I knew that, searching for a warmer region, he had left town a few years ago to live in Florida. I had his mother’s phone number and would call periodically to see if she had heard from him. Jay Trimble, the framer at Plaza, had received phone calls from him once or twice a year, but since last summer, no one had heard from him.

Joel has never owned a phone. When he worked at Plaza he lived across the street at Jim DeVau’s apartment complex, now beside Third Man Records. You threw rocks at the window to let him know you were there, to let you come up. 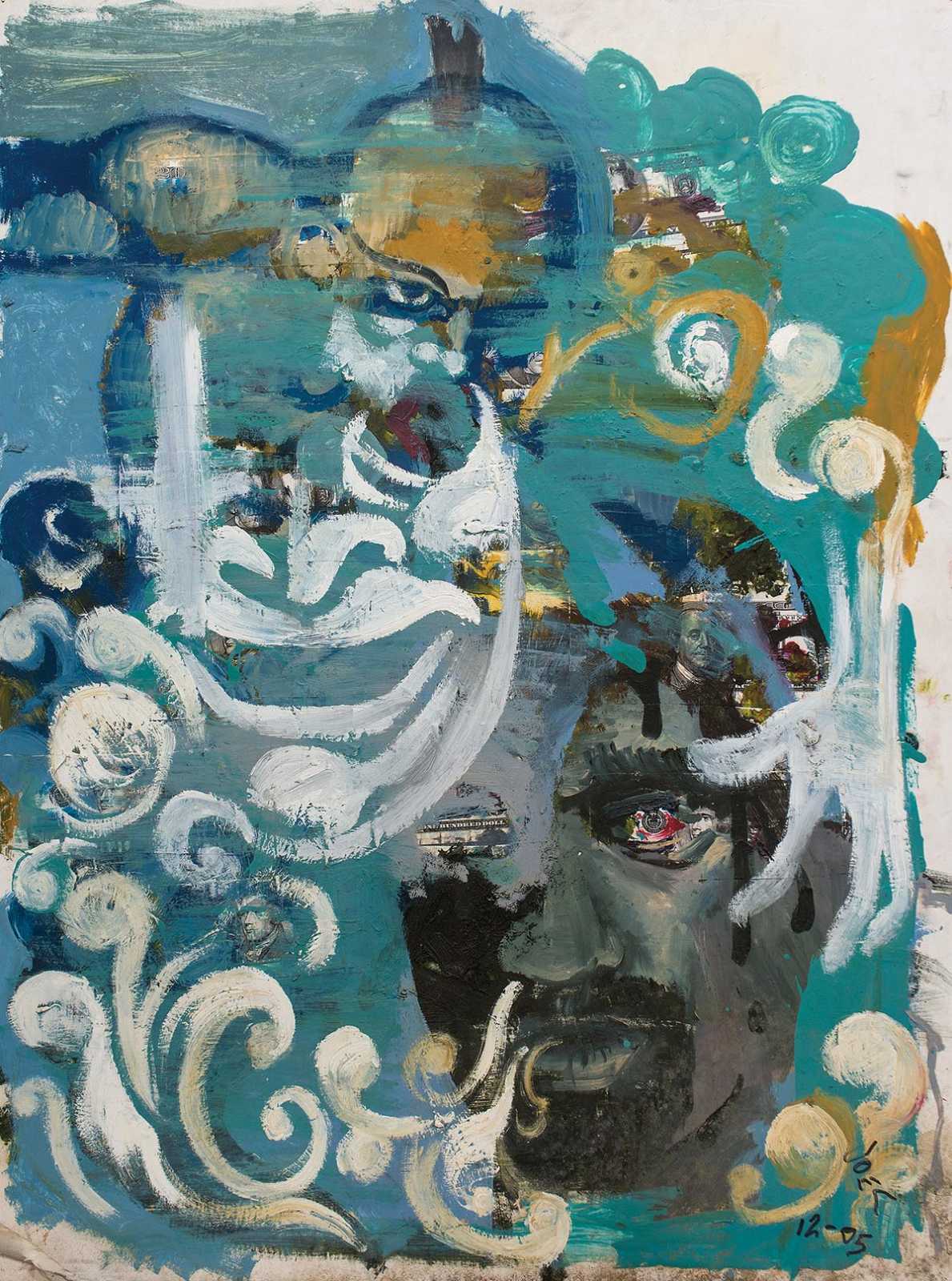 His last few years in Nashville, he did not paint—no room to do so or money to buy supplies were typical reasons I heard from him. But I feel like he was always working on his epic graphic novel, compiling years of work, building characters, and conceptualizing the layout.
After talking to others who had collected his work, missed him, loved him and his work, it made sense to put together a show. Where in the World Is Joel Batey? is a response to how we miss him, want to honor the amazing work that he created in Nashville, and inspire others.

The earliest work in the show is from 1994, from Michael McBride’s collection. Michael taught Joel and other neighborhood kids art lessons at Edgehill Community Center. “I remember talking with him at 14 or 15 years old, and he was so far ahead in maturity as an artist,” Michael said. “He didn’t realize it, because it was so natural to him. He was able to pick up things, perceiving things as an artist.” This work is a watercolor of superheroes and fantasy creatures, color names written in with pencil; the layout and shading seeming to promise what was to come.

I was able to gather a variety of Joel’s work from seven collections in Nashville, ranging from a six-by-eight-foot oil painting to paper drawings, to mixed-media work and slides. The show presents examples of his work through the years, the evolution of his style. 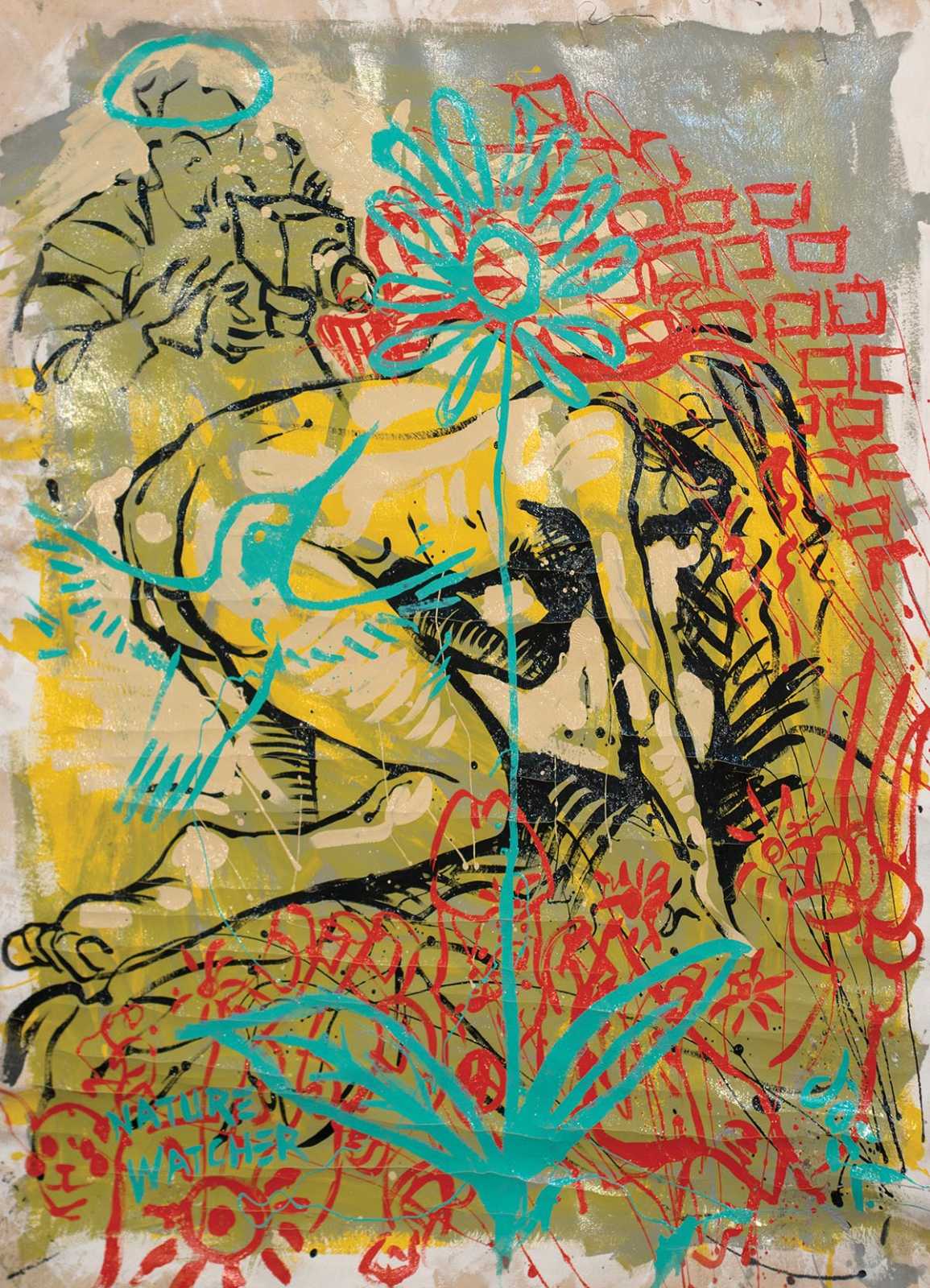 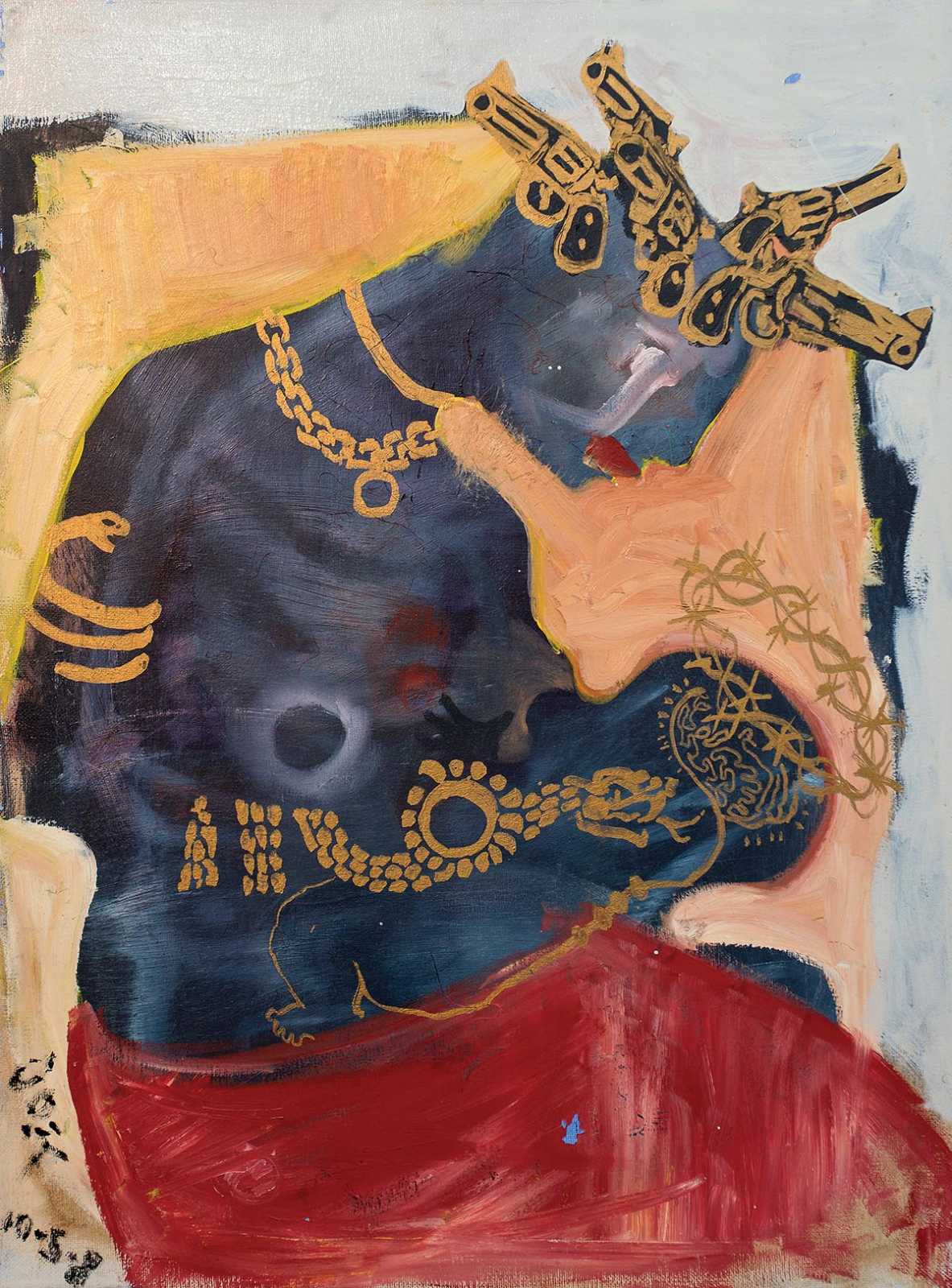 Von Derry, owner of Salon Salon in Franklin, has a large collection of his work, from which we chose to hang an insect series that showed some of his loosest brush work. 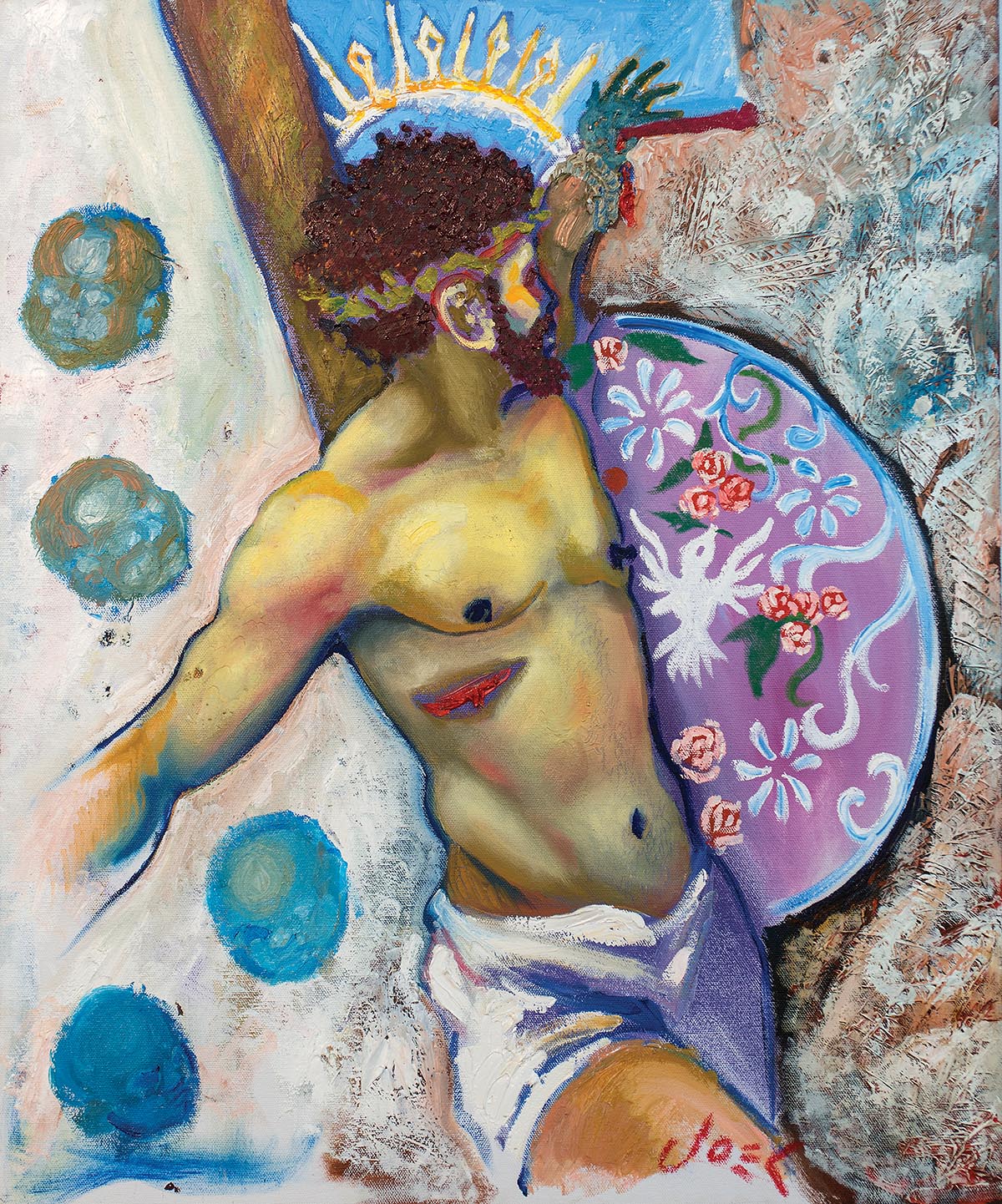 The show also includes more-detailed work such as Untitled (Blue Lady), where images appear stacked upon others, the story overlaid with hieroglyphics and imagery. Joel would hide faces in the negative spaces or unlikely places, so that if you didn’t look long enough you’d miss important details or sidelines to the plot.

At the opening reception, collectors and friends talked of all the things we remembered about Joel, how work was everywhere in his apartment, lining the floor wall to wall. He was prolific in his making. He would paint on any surface, with any medium. Sam Dunson remarked, “The work fed off him, or he fed off the work.” That summed it up for me: He is represented in every brush stroke, every line. Every decision he made was the artist himself.

Joel has no idea I put together a show about him. I hope maybe he can feel the energy! 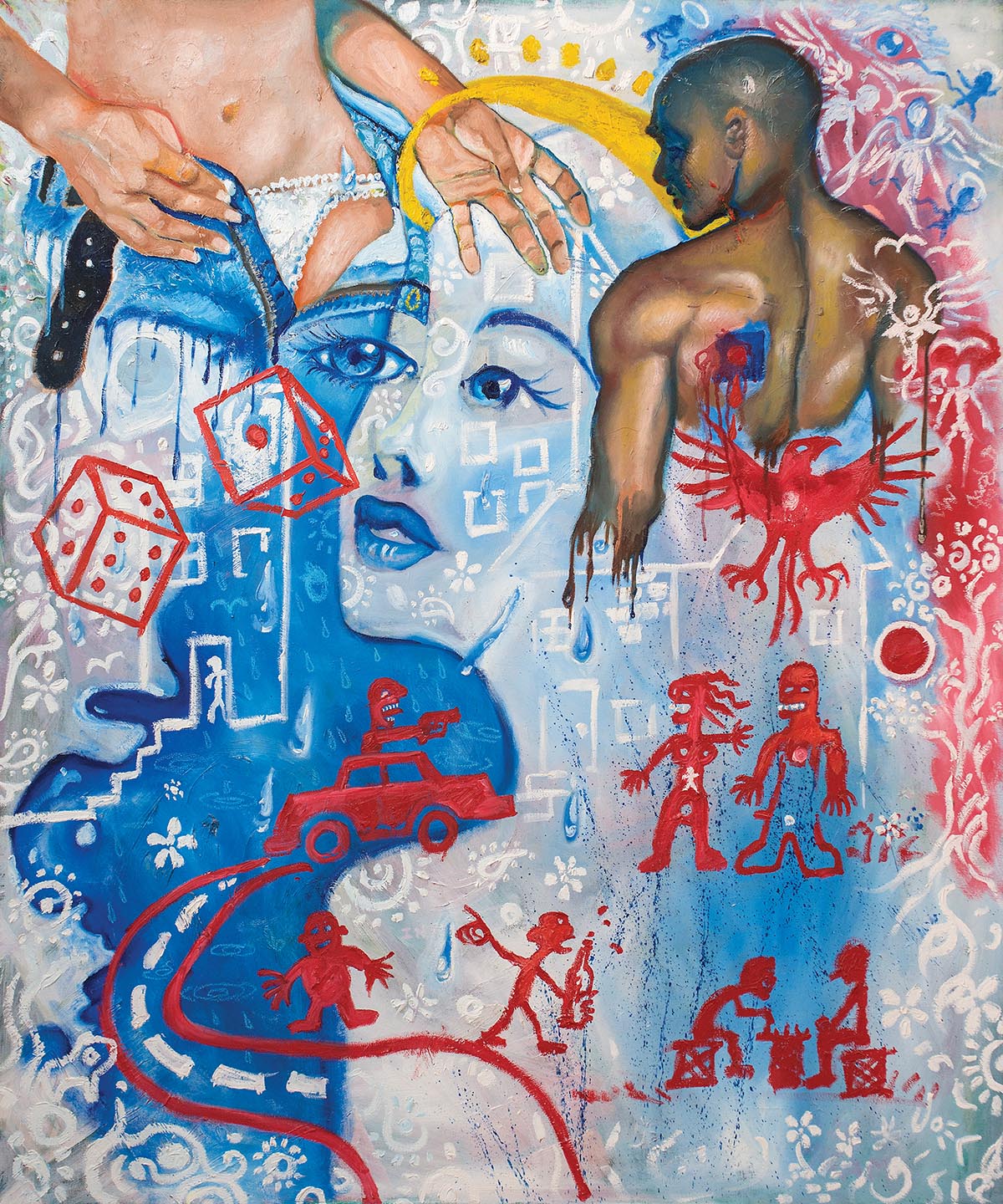 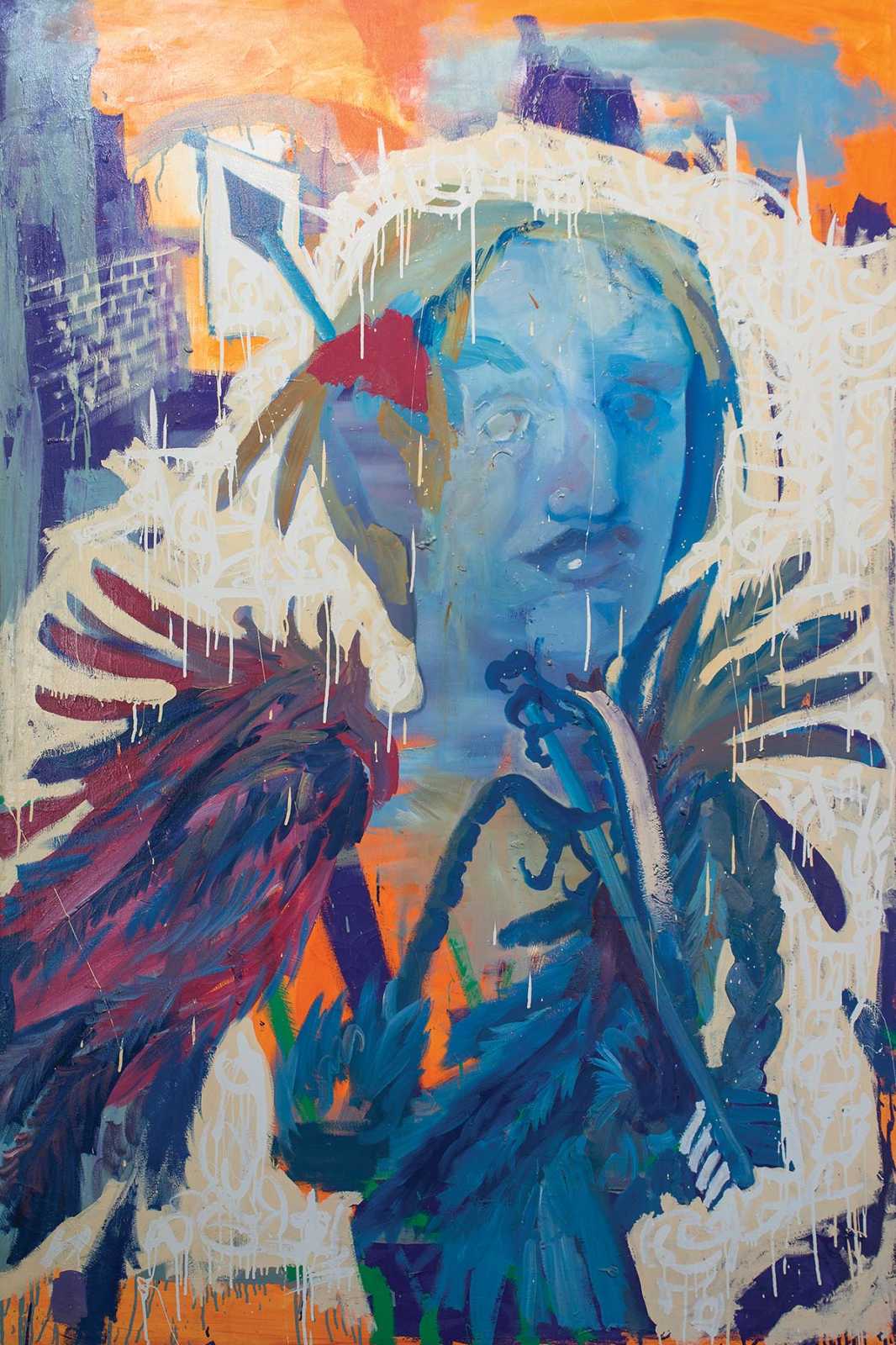