Having prevailed for centuries as an authoritative means of communication, the print publication is a medium whose longstanding reign has begun to face challenges, as digital media continues to steadily overtake the realm of the written word, a reflection of the 21st century’s ever-growing connection to and reliance on a cyber space. But, because print is not totally gone, this may be one of the most interesting periods to witness the coexistence of these media. Such evolution simply begs the question, when will print be obsolete? And will cultures always uphold its preserve? 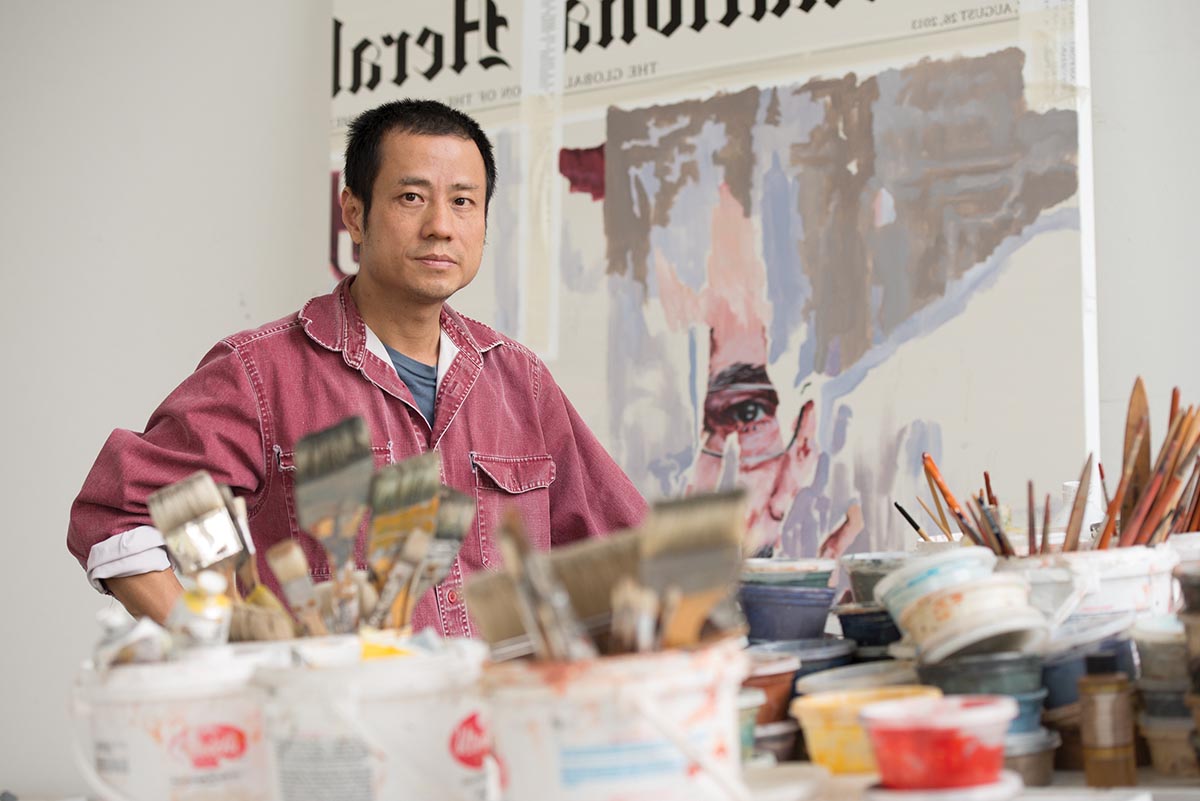 Courtesy of the artist and Chambers Fine Art

The work of California-based artist Xiaoze Xie put this query into the limelight in a big yet subtle way. Xie creates medium-to-large, hyperrealist oil-on-canvas paintings that illustrate magnified renderings of books and periodicals. Often depicted as worn and weathered, Xie’s subjects are not portrayed in full view; rather, the artist crops his imagery to focus on specific aspects of the represented paper and ink—a book’s frayed spine exposes warped sheets, now curled and yellowed; a soaked newspaper results in transparency, the text of its back revealed in a faded gray bleed on its front page. These paintings will fool any eye into believing they’re actual photographs; the precision of Xie’s hand and palette prove utmost advanced skill of both technique and concept.

“Subject matter always is important to me,” Xie explained. “In the paintings of books and newspapers, my subject is the documentation, or material form of time, memory, thought, and history.” 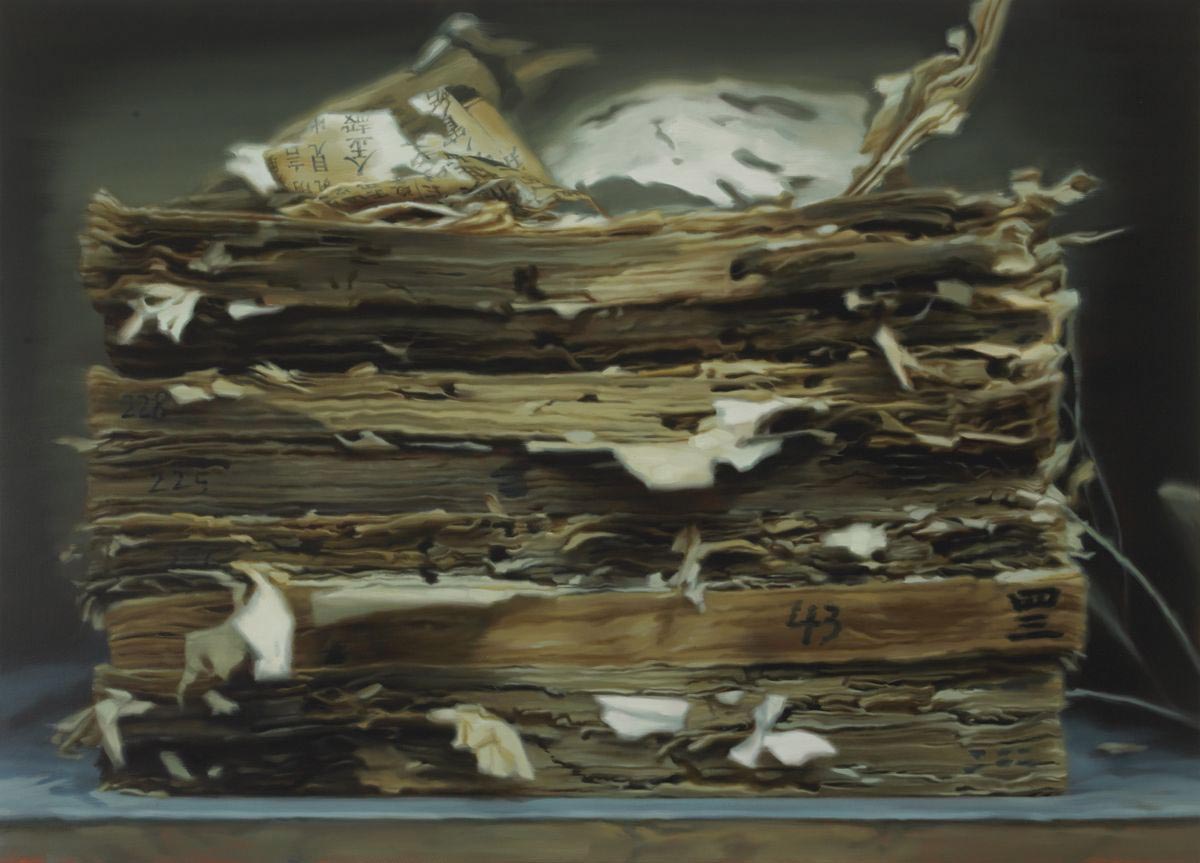 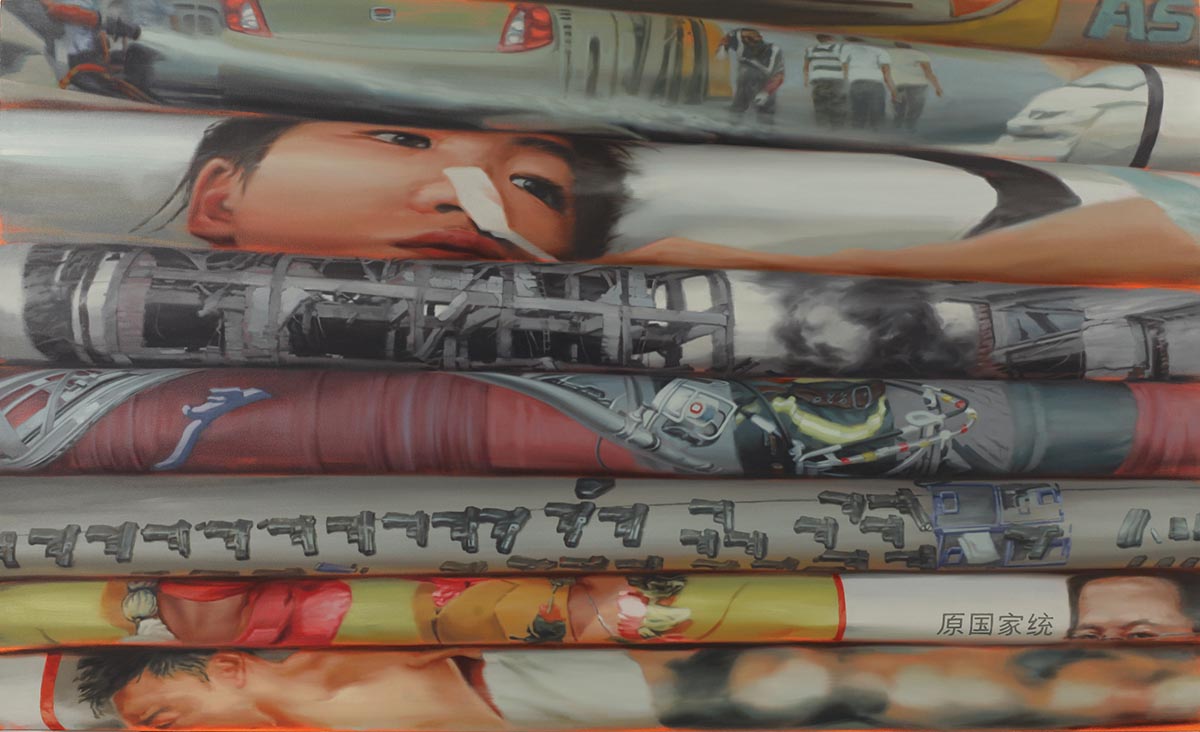 While the artist is of Chinese origin, his subjects are depicted in a variety of languages, thus indicating widespread use of the print medium regardless of dialect. This is also a reflection of Xie’s international background. Born in Guangdong, China, Xie graduated from Tsinghua University and the Central Academy of Arts and Design, Beijing. Now residing in Silicon Valley, Xie’s geographic proximity to the pulse of technological advancement is immediate, and thus further heightens the conceptual interplay between the analog and digital media at stake in his work, even if only by coincidence. 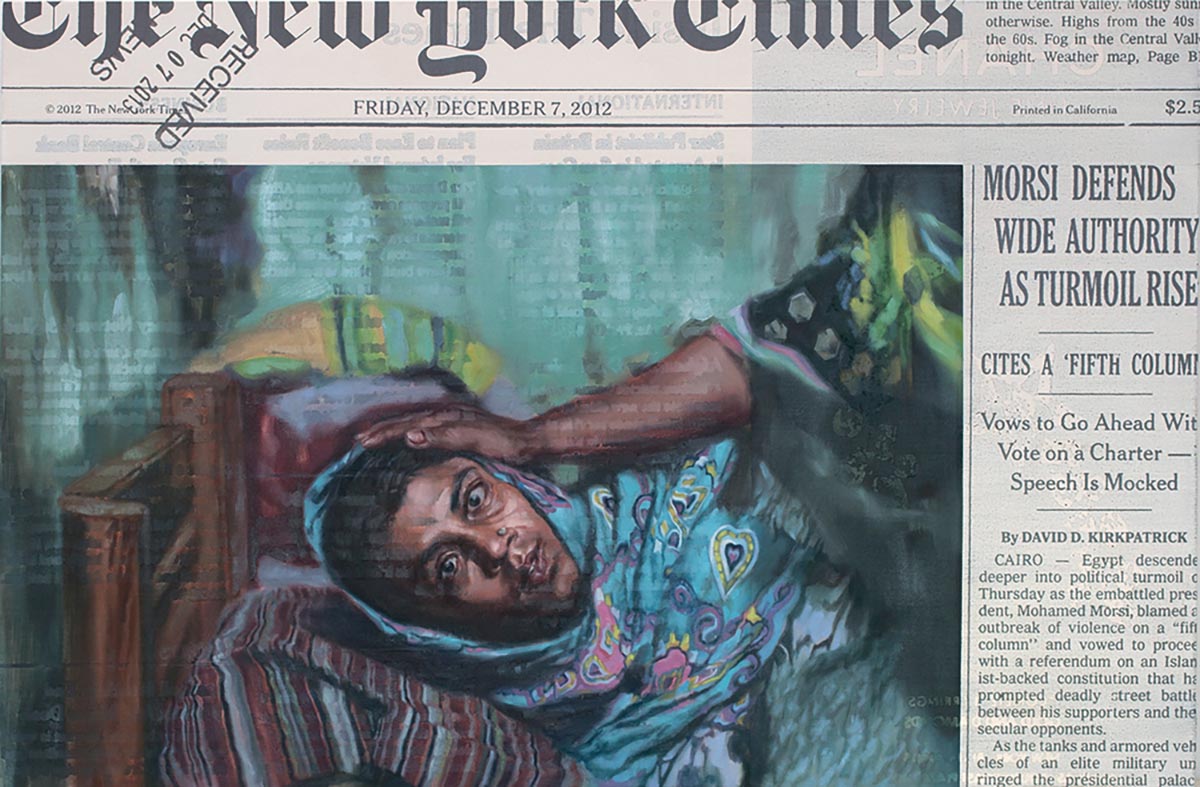 Many of the subjects that Xie paints are print publications he discovers in the archives of esteemed academic institutions throughout the world. And, as previously noted, the physical condition of some of these texts is of great concern. The act of discovering these publications, and recreating their distressed likeness in magnified form via paint, stages an appreciation of cultural history while also indicating concern for its preservation. Are these books in fact relics that identify who we are as a species? And is the printed word to receive as much esteem as other artifacts and/or art? 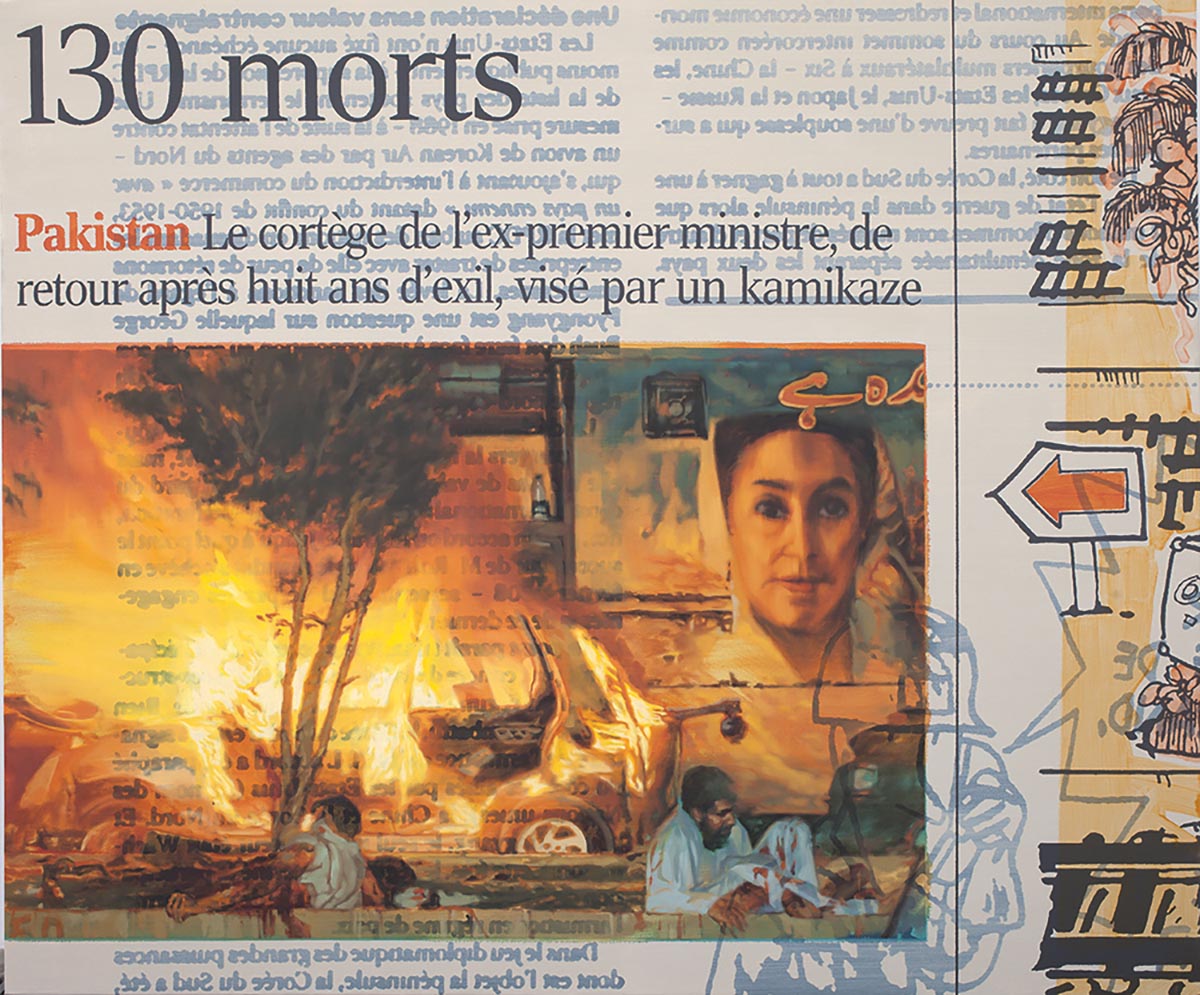 Of course, the immediate answer to this question is, “Yes.” This seems, and should be, rather obvious. But Xie directly challenges this notion in his paintings that portray newsprint. This is not to assume that literature of a journalist nature is of lower account; on the contrary, the press is what many of us resource to better connect our awareness to each other. Xie’s paintings examine the chaotic nature of the periodical. Although the act of producing a headline is enduring, the content of even the (often sensationalized) front page is fleeting, ephemeral in its physical form, and stagnant in comparison to digital media’s rapidity and influx.

“Subject matter always is important to me. In the paintings of books and newspapers, my subject is the documentation, or material form of time, memory, thought, and history.” 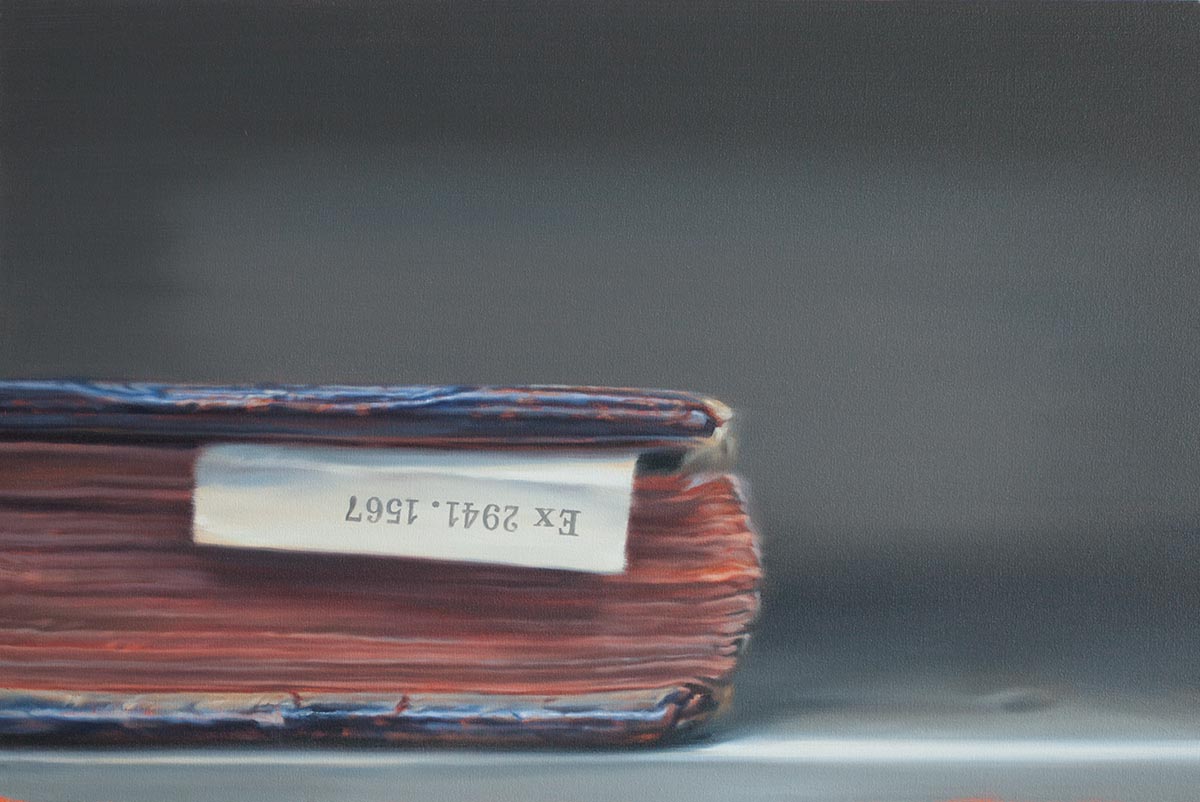 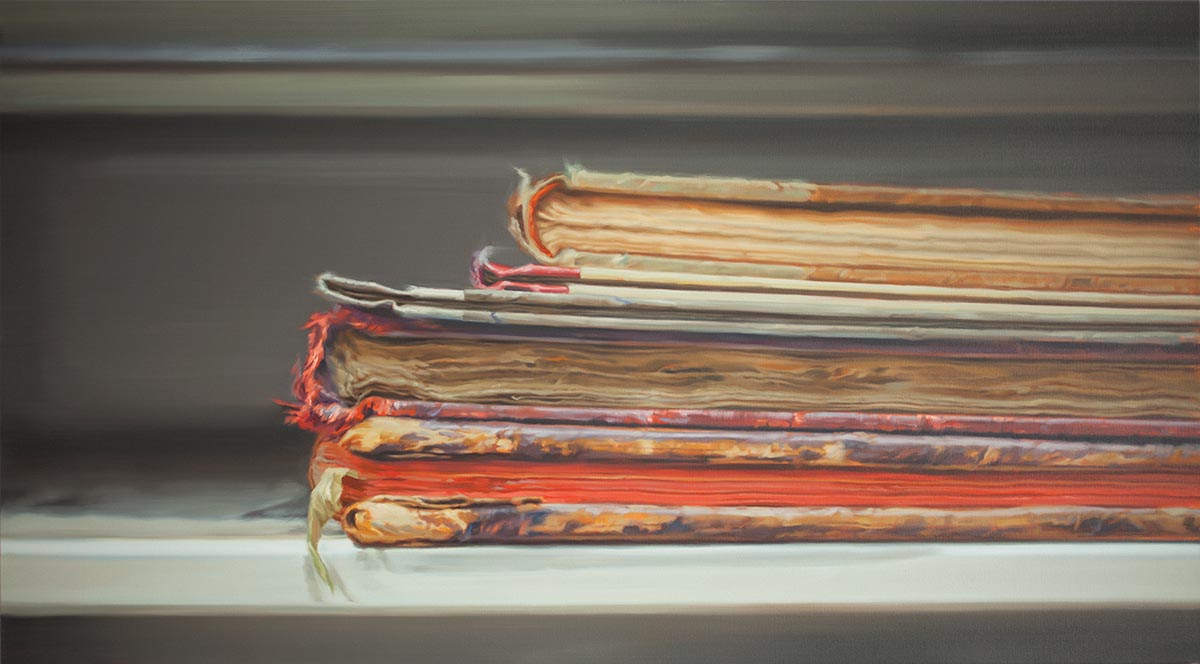 Xie’s work internalizes these observations of printed matter and provides for viewers an avenue for contemplative pause. “I don’t have prescribed meaning in my work,” he stated. “I hope my work is open to interpretations by the audience and speaks to the public on different levels: formal, aesthetic, narrative, or philosophical.”