“Art is the means we have of undoing the damage of haste. It’s what everything else isn’t.”

Craig Carlisle has lived and maintained studios in New York City, Los Angeles, San Francisco, and Columbus, Ohio; he has professional roots on the coasts, not in the South. So it must have been a bit of a surprise when, in the middle of planning a move back to California, he found himself moving his studio to a farm on the edge of a pasture forty-five minutes south of Nashville. 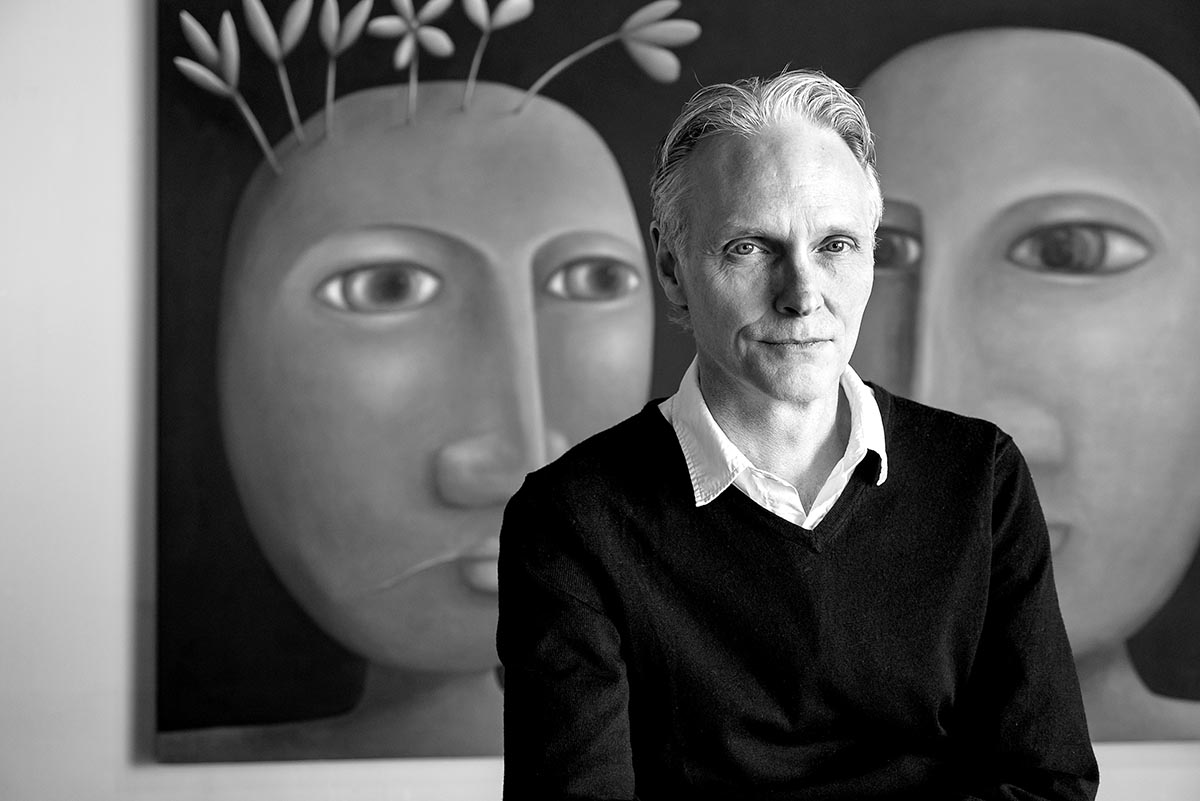 Why, you may ask, would a self-described mid-fifties, mid-career artist with institutional support in the art world’s considered centers of ambition pick up and move to the rural margins? According to the soft- spoken, introspective painter: It just felt like the thing to do. Carlisle enjoys the solitude. The light is great in his studio. His family is close by. Fair enough.

A recurring image in Carlisle paintings is big heads, which he refers to as, well, “Big Heads.” Whether the height of the canvas is 20 or 96 inches, the heads give the sense of colossal mass. Inevitably referencing the Easter Island Moai, they are mythic, genderless, ageless, and otherworldly. They have no hair and no ears, an ambiguous ethnicity, and rare or fleeting references to clothing or anything else that might imply date, place, or culture. These faces are devoid of (free from?) any attributes upon which human identity depends in its attempt to distinguish one person from another. I wonder, does the removal of all these indicators of environment make the faces feel less human? Or perhaps Carlisle aspires to a distillation of what makes a face most human: the expression. When you take away the interchangeable extra, the countenance is basically all that’s left. Highly individualized even without superficial indicators of gender, dress, culture, or age, they are eerie. They are unearthly. They are demigods, tricksters, and guardians. 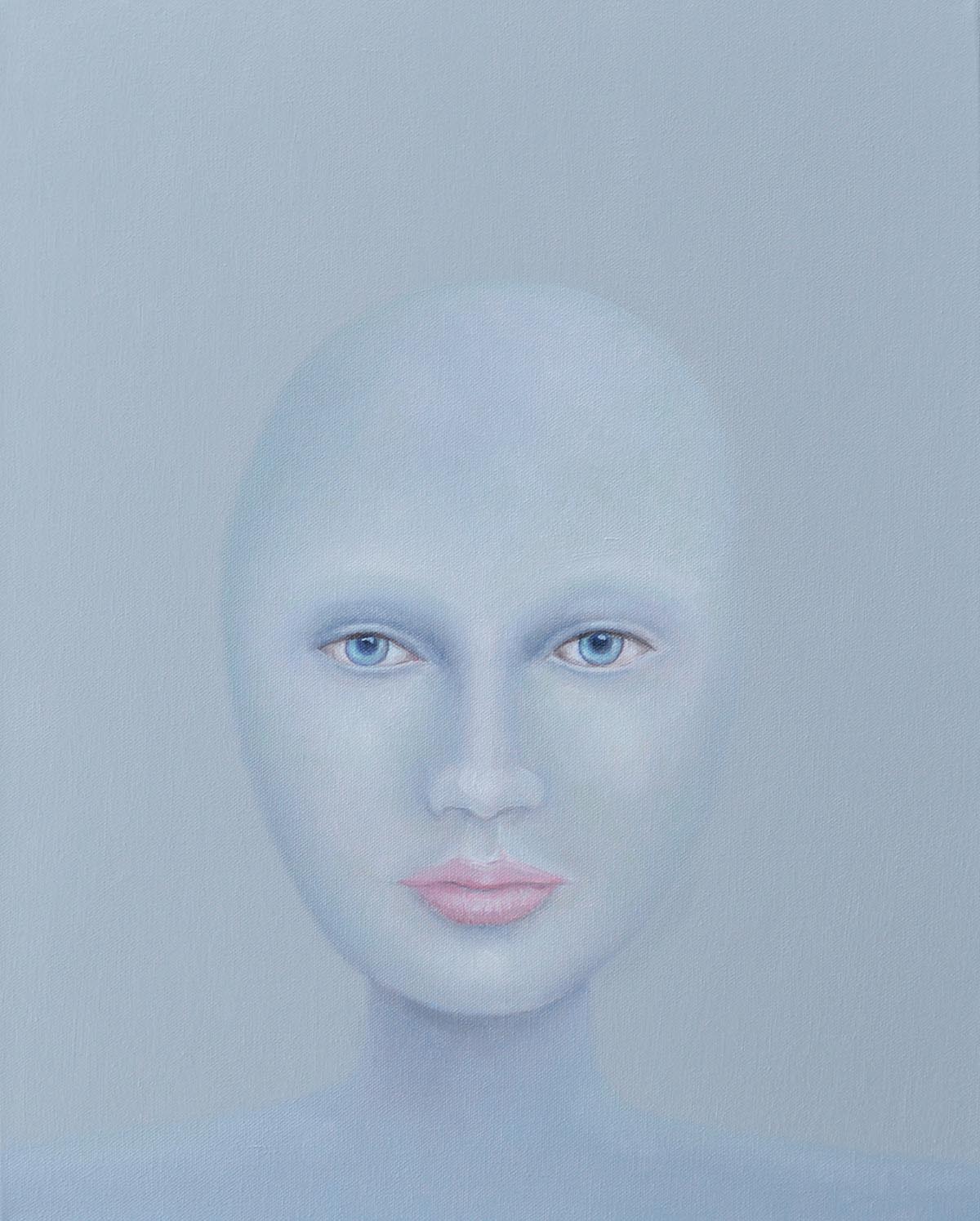 Of the submerged unconscious mass (id) of the Freudian iceberg, only the tip (ego) is conscious and visible. While it could be said that historically the genre of portraiture is the tradition of commemorating the ego, Carlisle’s big heads are better viewed as portrayals of the id and, as such, induce a sense that they are both human and non-human, comforting and unsettling. There are echoes of Modigliani. Some of the faces have tightly rendered features, like Byzantine icons. Some are stylized, like a Brancusi, an African mask, or an Easter Island colossus. There is also monastic serenity, the harmonic musicality of Morandi.

I asked him about the expressions, if he has control over them, or plans them. He told me he starts with the shape, then he starts painting. They are all improvised; the expressions and the palette are entirely an expression of his mood that day. They are mood rings. “I think it’s going to be a nighttime scene, but as I’m painting—nope, it’s going daytime.”

He was recently invited to make a self-portrait for an exhibition, and we make an artist’s joke: Take your pick, they’re all self-portraits.

Carlisle’s big heads are no doubt whimsical, with some sprouting flowers and some going sideways into water; some floating in front of cities, others peering from tufts of furry flora. In a world of five-second glances, his big heads risk being taken lightly as goofy, decorative, repetitive—or worse, reductive—“the guy who does the big heads.” Whimsy is easily dismissed as playfully one-dimensional, but I would assert that Carlisle’s work is playfully multi-dimensional.

In early March, I go to his studio to see an entirely different body of work, called Letters to a Friend, which plunges into deep water and reveals the emotional richness of this painter. I bring my kids and mother along.

It’s a bright and windy day when we pull up to Carlisle’s farm in rural Columbia, Tennessee. His studio has a large glass wall and is surrounded by pastures, goats, roaming chickens, frantically honking geese, miniature cows, and grazing sheep. The painter himself is quiet, thoughtful, and always keenly engaged. After decades of metropolitan life, he now finds himself in the countryside, embracing a contemplative time. 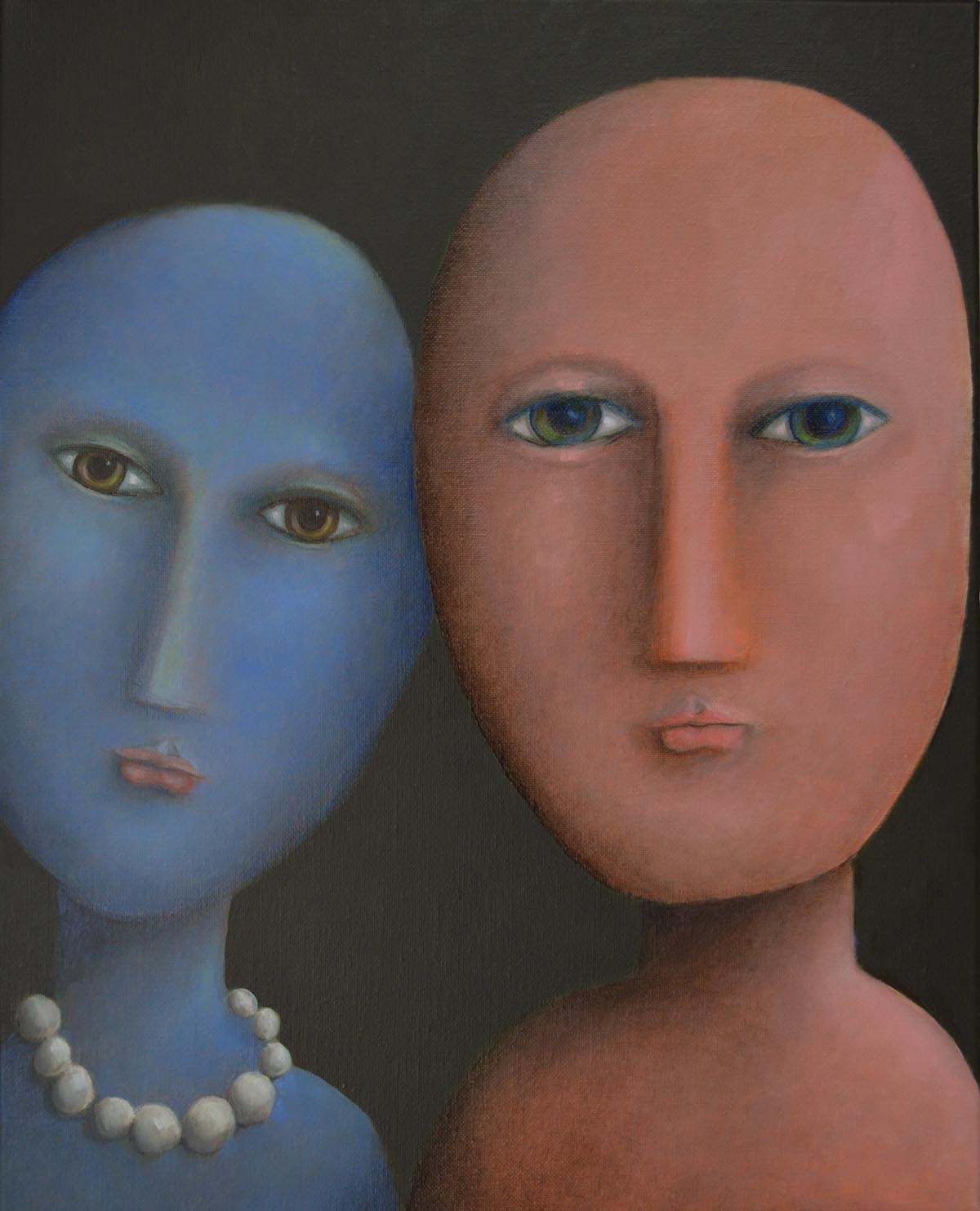 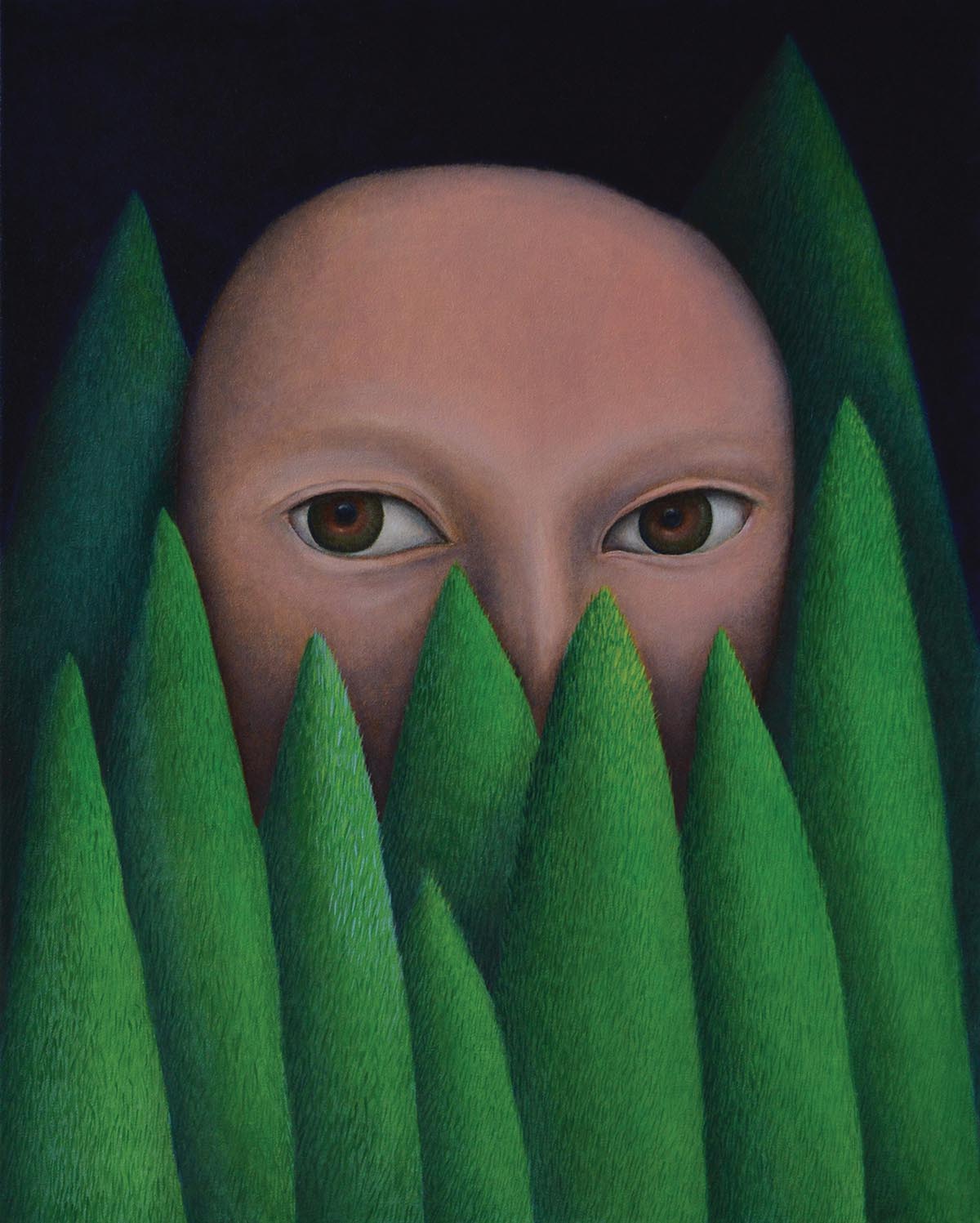 The day he moved into his studio, a very good friend and mentor died. In his crushing grief, Carlisle did what painters, writers, musicians, really artists of all kinds, have done since time immemorial. He let his art take over. Within all its manifestations, art can communicate, protest, praise, criticize, bewilder, promote contemplation, or engender connectivity. It can help us escape, reveal truths, or plunge us “more violently” into life, as Francis Bacon would have it. Self-expression is a small part of Art’s goals, and decoration an even smaller part; Art strives to become. In times of grief, Art can be the grief itself.

Carlisle pulls out ten canvases for me to see, some very large, all oil on linen. They are simple, each different from the last but all saturated with a seething stillness. Some of the elements from his other work are there but more malleable. A few large heads appear, now inverted. One has three eyes. One has become a cloud. Mournfulness is unquestionably present, though hard to put your finger on where exactly. Each piece has a small word or phrase written in French, a language his friend loved: “Wherever he is now, he’s speaking French.” 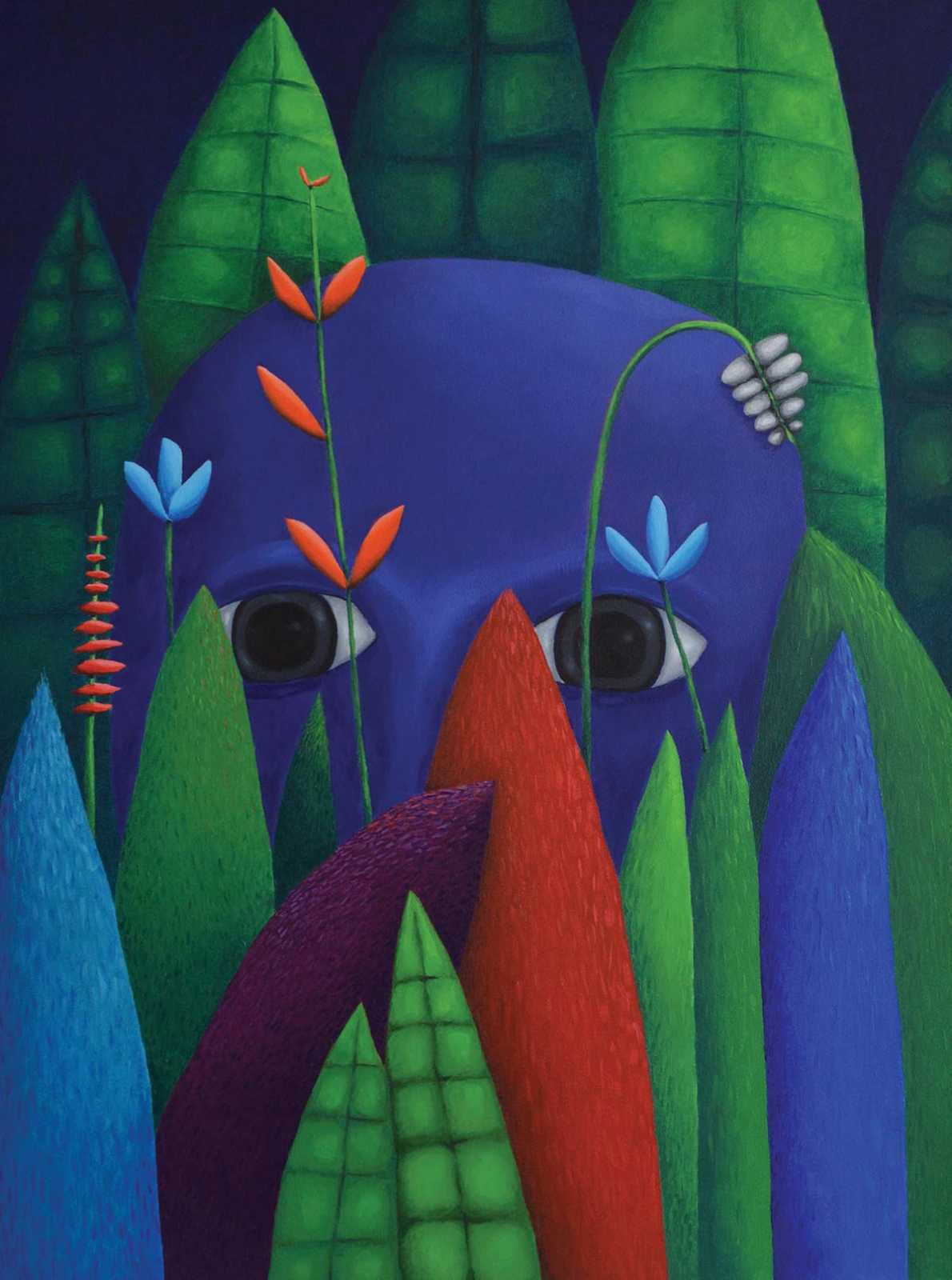 I spend time with a very large painting of a fawn in the snow with the word vulnérable painted across the upper middle of the scene in just the right cursive. Another piece features the word saut (leap) and a pair of disembodied arms, rendered with almost childlike marks. It feels both austere and nonchalant. In The Riptide, one of the big heads floats serenely on a body of water while a dove watches over; this one has a story and Carlisle relates the tale. In the late 1990s, he was caught in an actual riptide while surfing in California. The current had overtaken him, and he’d lost all muscle power. Desperate, he’d given himself over to the blue, and as he sank down, seconds from death, a paddling surfer happened to see him, towed him to shore, and left him on the beach. Carlisle never saw him again.

The new works, growing in both number and scope in the rural farm’s glass-walled studio, have something of the devotional. They are confessional, earnest, a distinct and welcome break from the world of art fairs and Instagram, where Art can be mistaken as an insignificant kaleidoscope of fumbling makers preoccupied with innovation, and dealers sniffing out marketability. All this cleverness and existentialism has maybe dragged a fair portion of today’s work into a functional cul-de-sac, but Carlisle’s work, especially his latest un-shown group, is a paean to hard-won straightforwardness. As Philip Guston, a painter in Carlisle’s (and my own) canon, said: “I think we are primitive really, in spite of our knowing. It’s a long, long preparation for a few moments of innocence.” 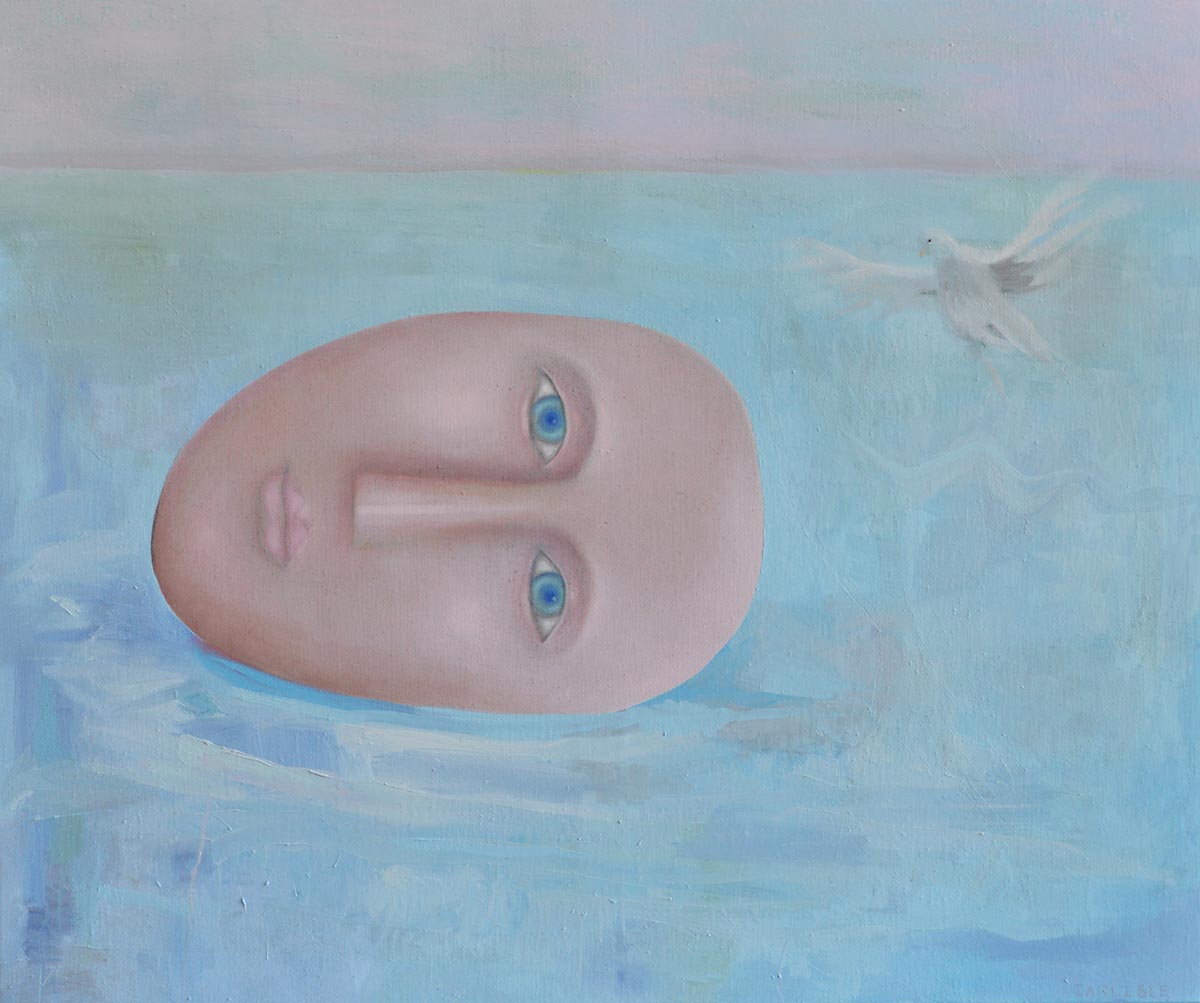