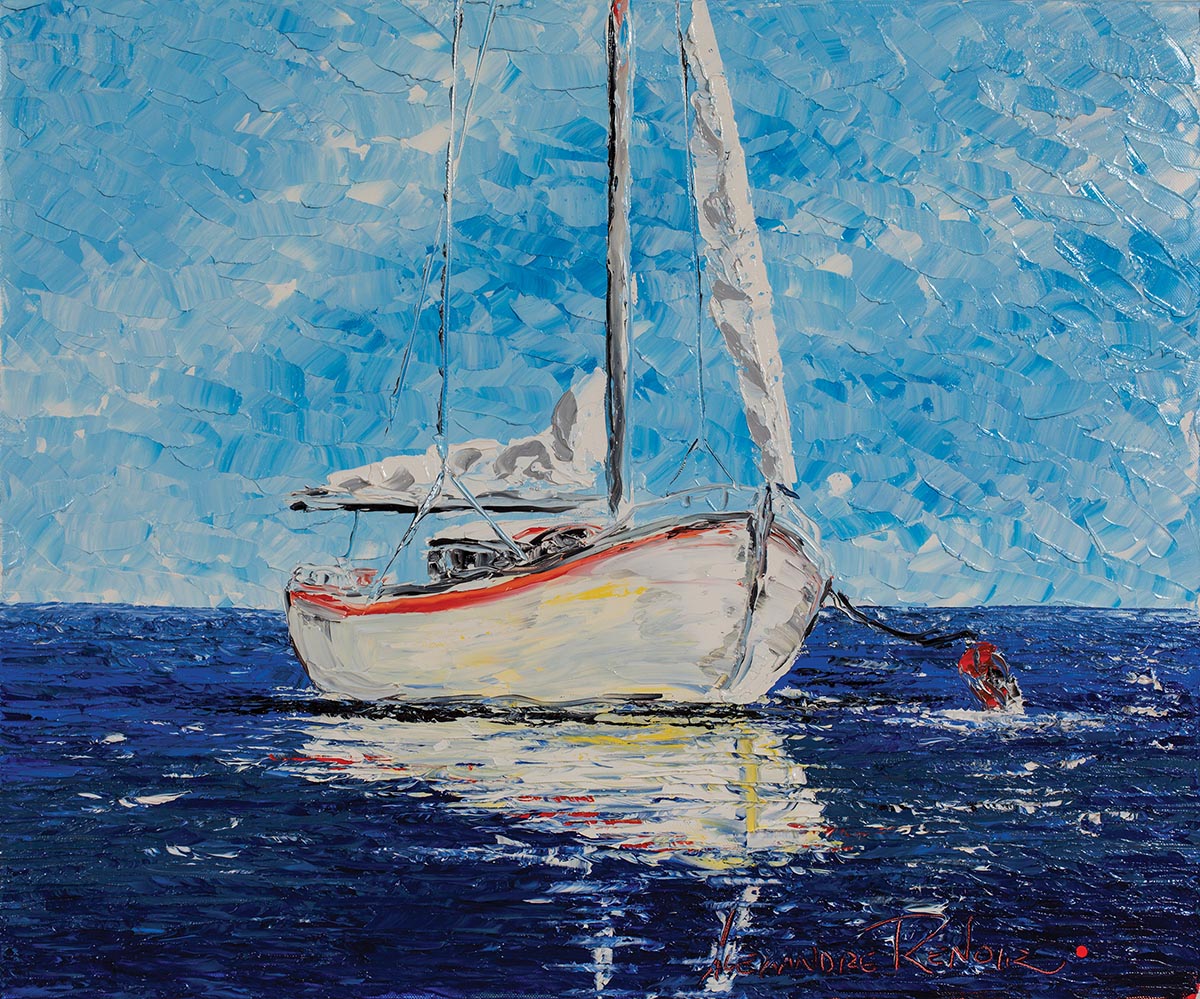 Alexandre Renoir was painting in his Southern California studio when Nashville Arts Magazine called him for an interview. We were hardly surprised to find him in this creative endeavor. What else would you expect from an artist named Renoir?

His surname, by the way, is no coincidence. Alexandre Renoir is a direct descendant of the legendary French Impressionist Pierre-Auguste Renoir. Naturally, he has a few things in common with his illustrious ancestor.

“Despite his name, Renoir’s emergence as an artist was anything but inevitable.

To begin with, he paints in a style that is rooted in Impressionism, an approach that emphasizes sense and feeling over exact representation. One can almost feel the warm breeze blowing over indigo waves and verdant green shorelines in his painting St. Thomas Reverie. Light and color are everything in this work. Topographical details are hardly noticed at all.

Like his great-grandfather, Alexandre Renoir is also remarkably prolific. In fact, all the paintings in Alexandre Renoir: Beauty Remains, which runs April 22 to June 10 at the Monthaven Arts and Cultural Center in Hendersonville, were created during the first few months of 2018.

“I do work quickly,” concedes Renoir. “I usually create paintings as part of a series, working on four different paintings simultaneously. I’ll work on one for a while and then move on to the next. It still takes me about four days to create one complete painting.”

Despite his name, Renoir’s emergence as an artist was anything but inevitable. By the time he was born in the French Riviera town of Cagnes-sur-Mer on July 7, 1974, most members of the Renoir family had long since abandoned the visual arts. The old master’s descendants ventured into theatre and film. Anything but painting. 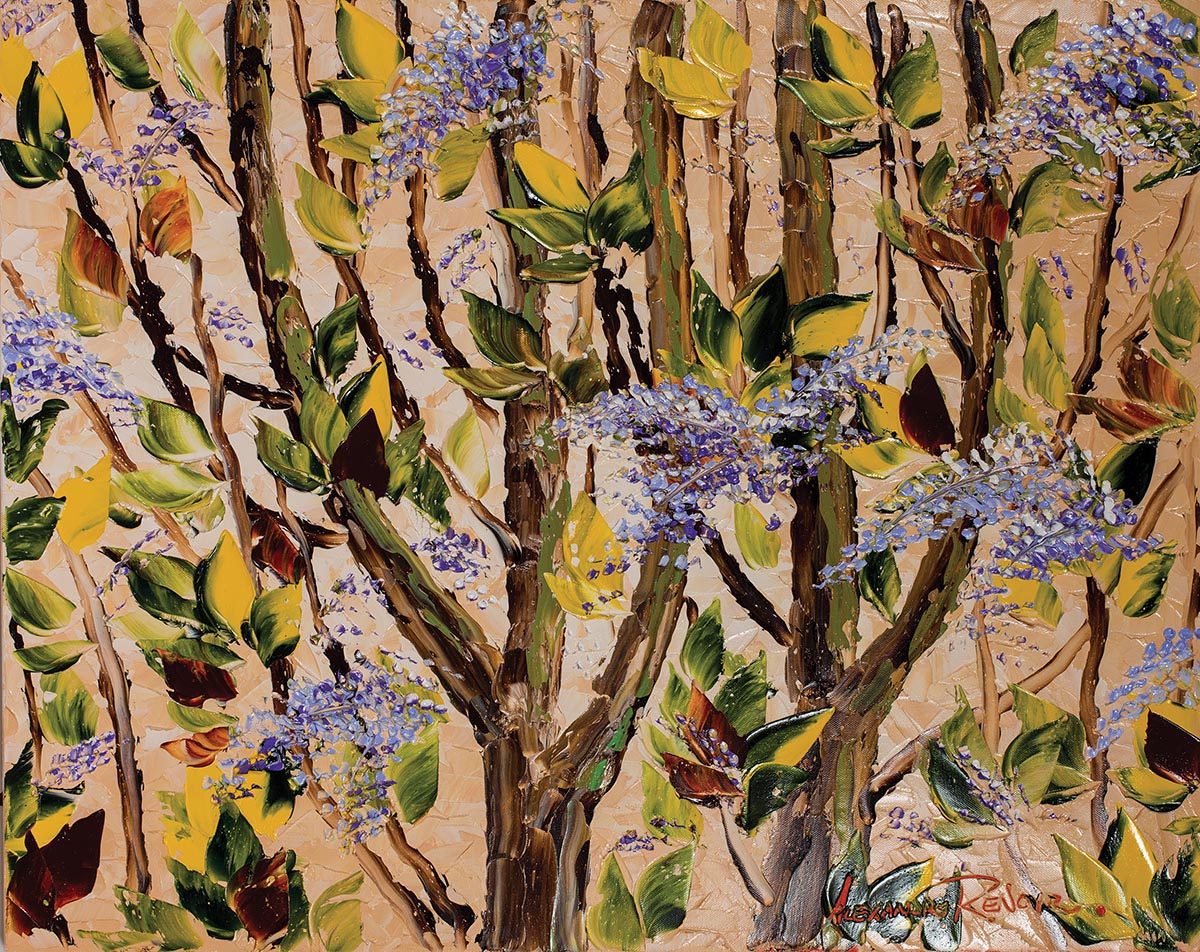 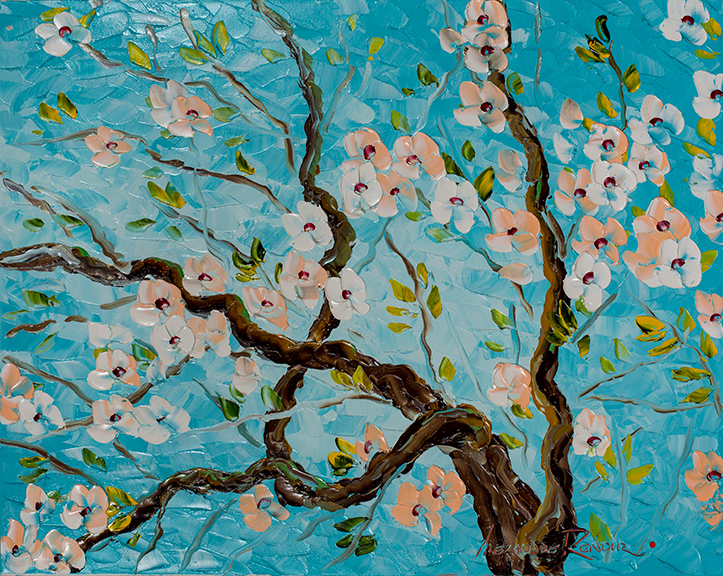 Alexandre Renoir’s father had once aspired to be an actor. He became an art broker instead, and in the late 1970s moved his family to Alberta, Canada. Immersed in the family history and French culture, Alexandre Renoir demonstrated a talent for drawing and sketching at an early age. His parents encouraged these gifts, sending him to Edmonton’s Victoria School of Performing and Visual Arts.

Over the years, Renoir tried his hand at a variety of artistic pursuits—goldsmithing, silversmithing, jewelry design, graphic design, photography, and theatre arts. “I tried all these different things because I wanted to find my place in the world,” Renoir recalls. “I also continued to paint, but I figured this was something I’d do simply to satisfy myself. I didn’t see myself entering the holy ancestor’s profession.”

That all changed in 2004, when he got a call from his brother, who was in Southern California. “He asked me if I’d like to take a vacation with him in Los Angeles,” says Renoir. “Well, I was living in Edmonton, Canada, and it was the middle of winter.” Suffice it to say, Renoir made a beeline to L.A. 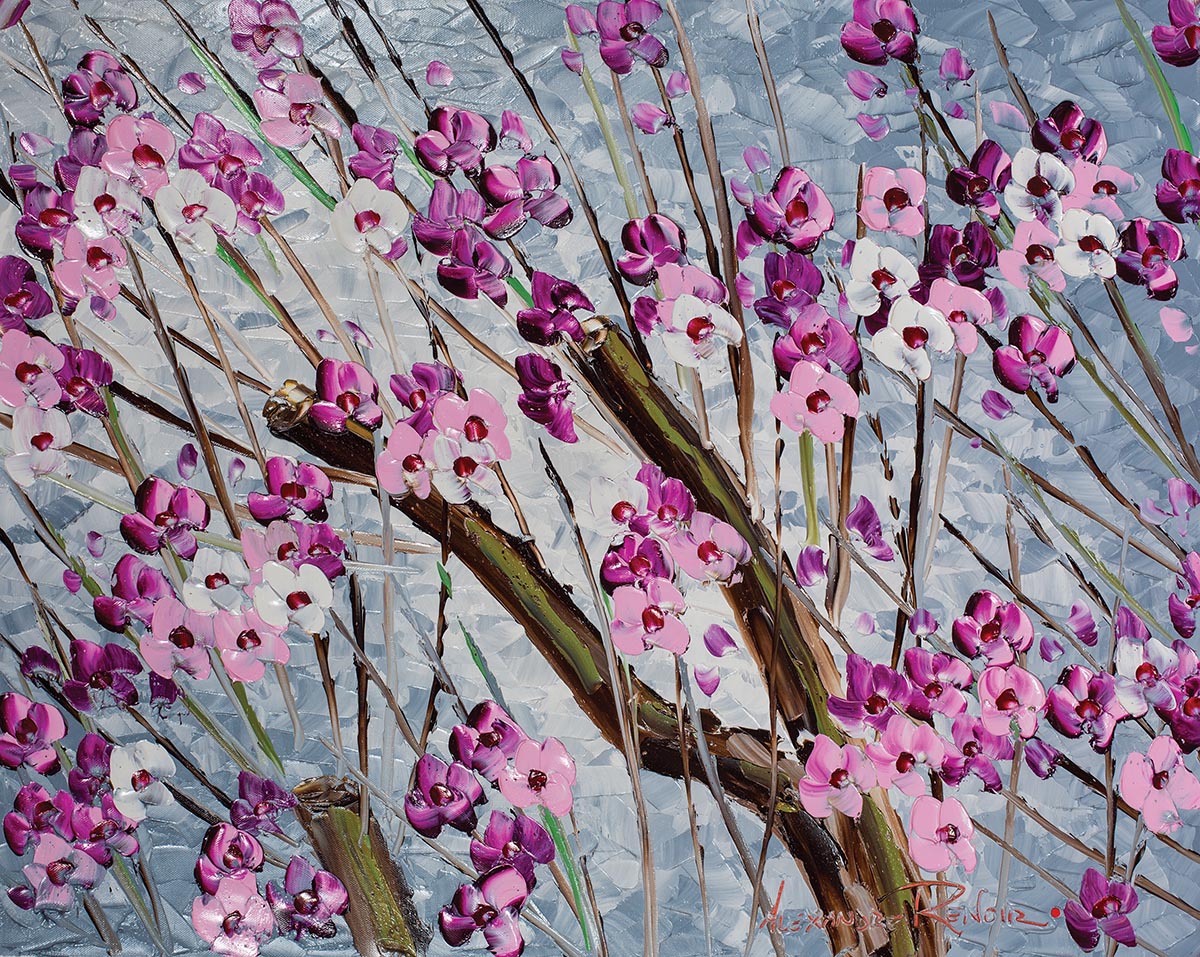 When he arrived, his brother wanted to know if he had brought his portfolio with him. “I didn’t think I’d need a portfolio for a vacation,” he says. A publisher in Beverly Hills, however, was interested in representing the young artist with the famous name. Renoir always realized that his lineage could be both a benefit and a liability. “My name will open up a lot of doors very quickly,” says Renoir. “But those doors will slam shut even faster if you are unable to produce something worthwhile.”

Renoir accepted the publisher’s offer, and in the years since he’s been traveling the world and exhibiting his works in numerous galleries. The Tennessee State Museum featured his paintings in 2008, in a show called Strokes of Genius. That exhibition included his paintings alongside works by Mary Cassatt, Paul Cézanne, Édouard Manet, Camille Pissarro, Jean-François Raffaëlli, and, of course, Pierre-Auguste Renoir.

The elder Renoir is best known for his intimate depictions of domestic life, such as his 1878 Mme Georges Charpentier and Her Children, and for such scenes of French street life and culture as 1876’s Dance at Le Moulin de la Galette.

“Ordinary people were often my great-grandfather’s favorite subjects,” says Renoir. “When he was younger, he’d hire a washerwoman to be his model, using what little money he might have to pay her.” 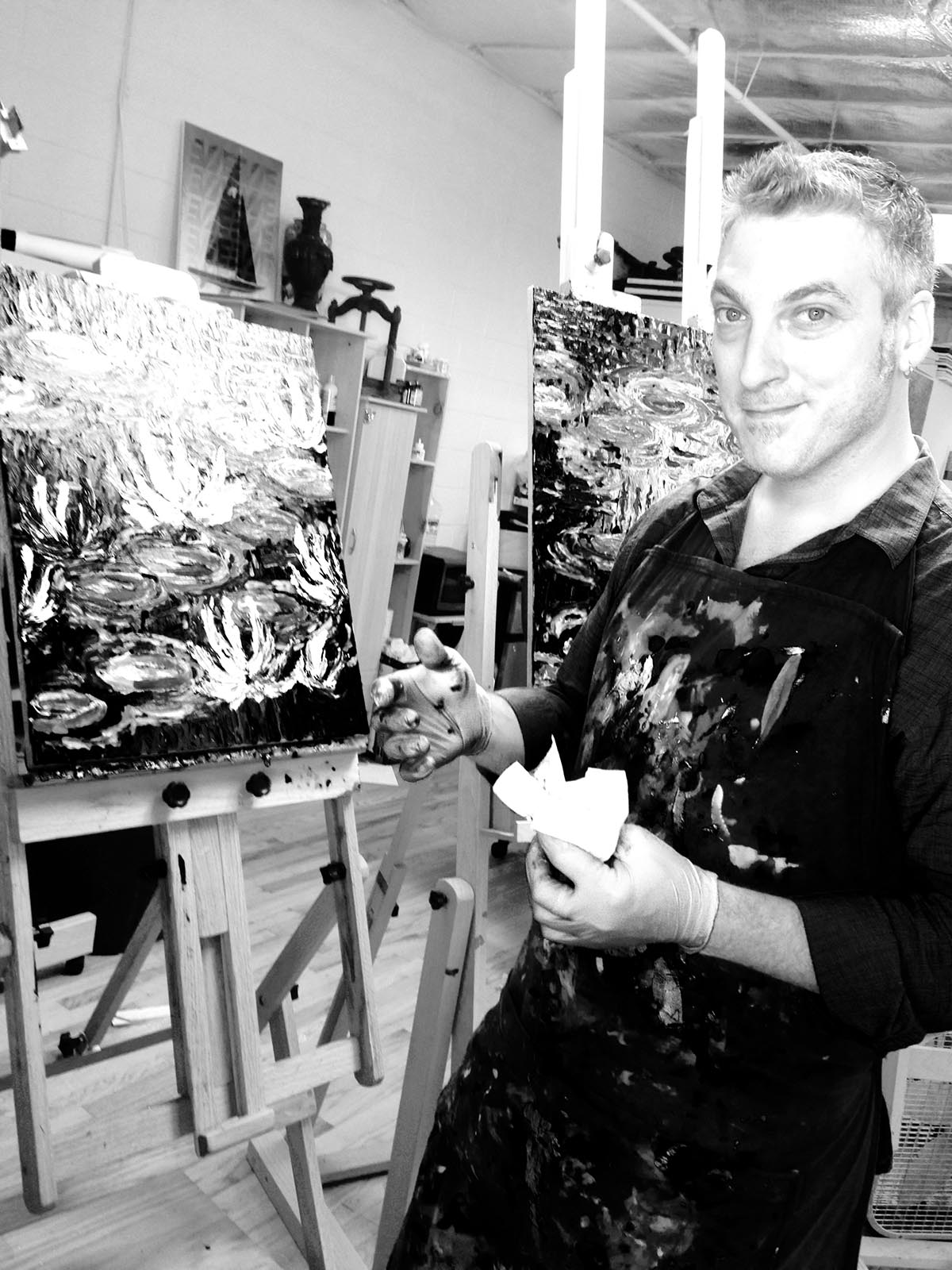 Alexandre Renoir in his studio; Photograph by Maria Steiner

Alexandre Renoir, who is represented by Park West Gallery, finds inspiration in nature. His Spring Cherry Blossom, which will be on display at Monthaven, is a sensitive study in violet. Anchor Down, meanwhile, highlights the brilliant shades of blue the artist encounters on his many trips to the Caribbean. All his paintings showcase his penchant for the palette knife, which he uses to create texture in his works.

“My great-grandfather believed palette knives were only good for cleaning palettes,” Renoir says. “But I think he would have approved of the textures I create with the knife.”

Renoir will conduct a master class for children on Sunday, April 22, at 12 noon. The class will be held in the Magnolia Cottage on the grounds of the Monthaven Arts and Cultural Center in Hendersonville. The event is free for members and $20 for nonmembers.