The title of J.D. Salinger’s 1963 novella Raise High the Roof Beam, Carpenters, about the dysfunctional members of a post-World War II bourgeois American family, is summarized in this one optimistic quote, borrowed from the ancient Greek poet Sappho: 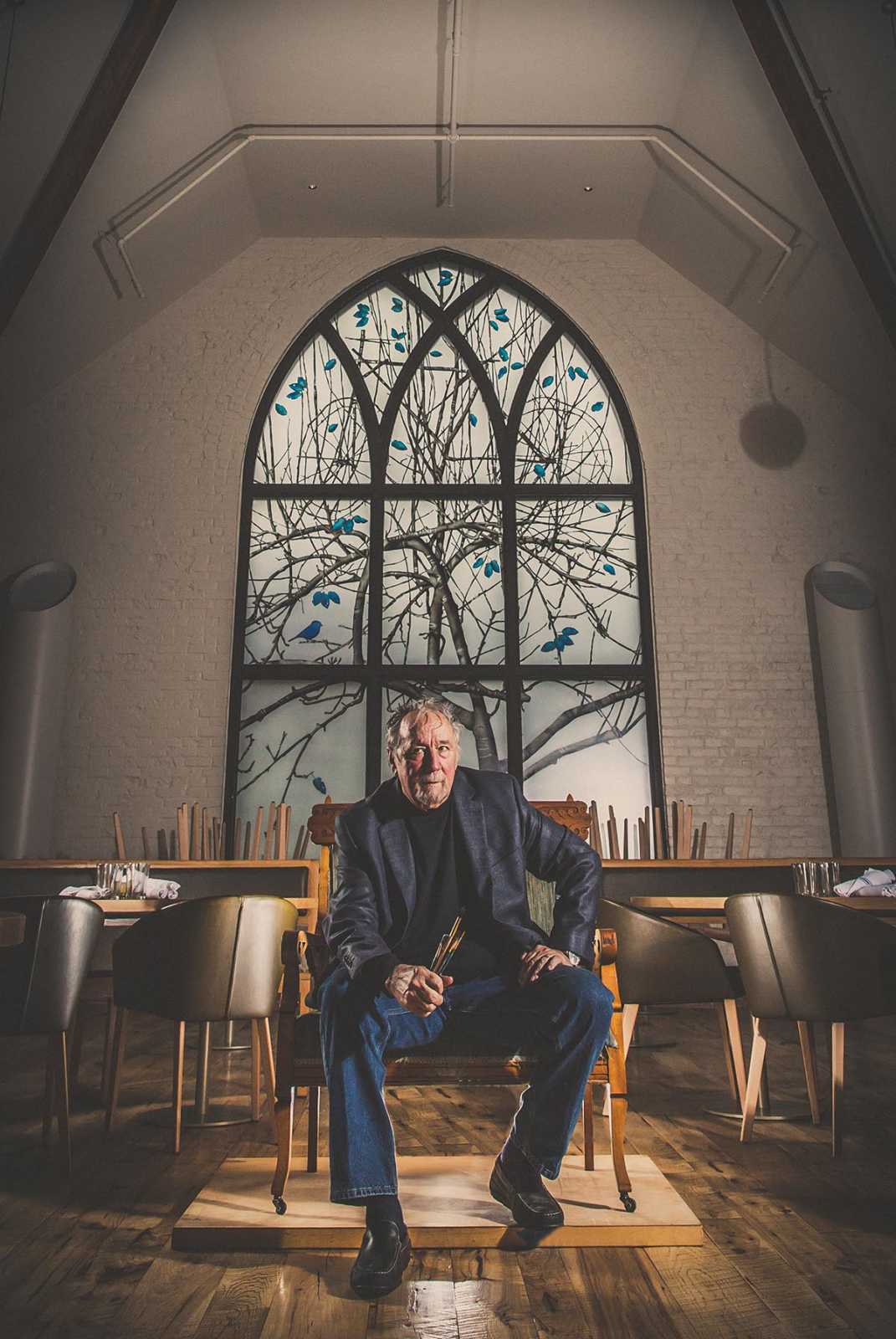 This poem fragment makes an appearance in the final pages of the book as an epigraph from younger sister Boo Boo to brother Seymour to commemorate his wedding day and resurrects an age-old pastoral sentiment among a modern audience. Through the use of metaphor, Salinger cleverly interweaves the structure of carpentry and the emotion of matrimony to represent the weighty potential of what is yet to come for the newlyweds, yes, but more important for the cast of characters as a whole who do not yet know what the reader knows: that Seymour will commit suicide a few years later.

For every source of light, there is an equally dark truth to discover. This tension is good. It’s this tension that draws us in as readers, as well as viewers, and rarely has a living artist captured this light-dark contrast as adeptly as Northwest Arkansas-based painter and architect George Dombek. Known best for his barn paintings, Dombek is more than barns, unveiling a selection of new abstract work at David Lusk Gallery this month.

The idea of barns and, by association, farming is a long-standing symbol in art and literature for community and family. A barn raising, for example, was a common practice by which neighbors helped neighbors without pay to erect barns across the 18th- and 19th-century America countryside. The whimsical displays of agrarian life in works by Grant Wood, Thomas Hart Benton, or Carroll Cloar invoke the carpe diem imagery of a Sappho or a Robert Herrick (“To the Virgins, to Make Much of Time,” 1648).

On the other hand, Dombek draws from nostalgia but is not nostalgic. “Barns are often pictured as romantic, from a time gone by,” said the artist in an April phone interview. “I don’t care anything about that. I’m not documenting a barn for history’s sake; I’m trying to make a painting that is relevant today.” Dombek relates more to the barn paintings of Edward Hopper and Georgia O’Keeffe because they are more concerned about the composition and have spent time meticulously removing things from it.

While some of Dombek’s compositions are certainly more abstracted than others, overall his oeuvre shows very little effort toward three-dimensionality. Fortunately, realism and exceptional artistry are not mutually exclusive. A trained and prolific architect from 1974 to 1995, Dombek exercises superhumanly controlled precision in his paintings—“superhumanly” because his primary medium is watercolor, which is infamous among artists as quite difficult to control. 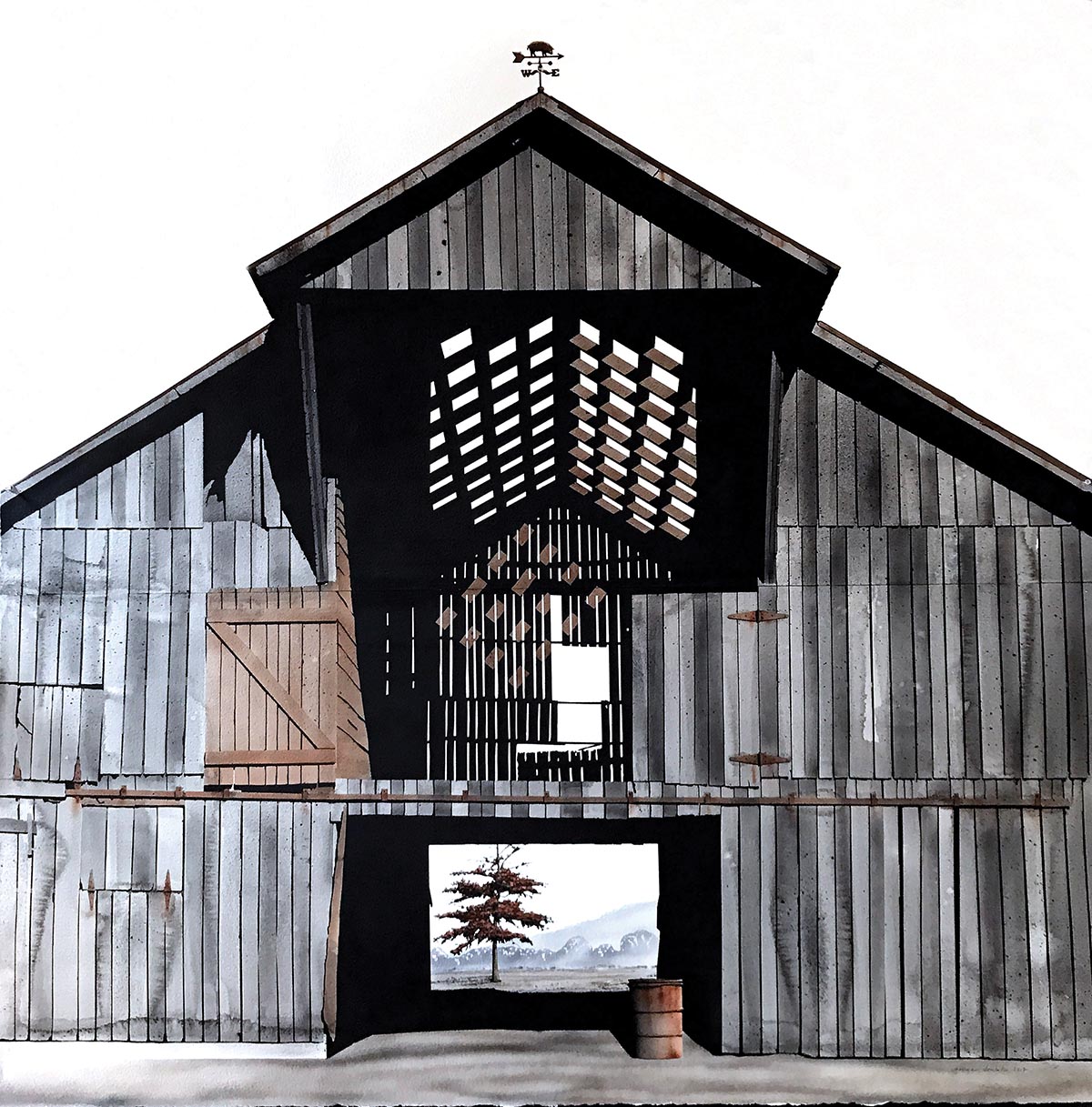 “I don’t want to control it,” Dombek clarified. “Watercolor is such a spontaneous reaction between pigment and water. That’s what makes it special.” Dombek believes that watercolor chose him, not the other way around. In almost every article or book published on Dombek, the author recounts the same tale about how the artist took up watercolor by chance in the year 1960 during his sophomore year of high school. “All the other art students went on to something else; I’ve been stuck there ever since,” he recounted. Fifty-eight years of watercolor is a testament to the artist’s obsessive dedication to his craft and his ability to produce over and over again without being redundant. People still want to see what this 73-year-old does next.

Dombek unknowingly drafted the first of many barn series in 1973 in response to an assignment for his historical preservation class. He was required to document an Arkansas building type by drawing various examples of the chosen structure, so he drew what he knew—the hay barns that lined the country road he traveled to and from school. And just like his first use of watercolor, he’s been stuck on barns ever since. That’s not to say his focus is stagnant. “One of the things that’s impressive about George Dombek is the way he continues to grow and develop as a painter,” according to Henry Adams, professor of art history at Case Western Reserve University. “Many artists either start repeating themselves, and the work gradually becomes drained of life, or they take a wrong turn. Over time, [Dombek] circles back to a theme of his early work, as he has with his paintings of barns, but bringing a new vision to the enterprise.” Since becoming an artist, Dombek has also painted rocks, bicycles, urbanscapes, steel mills, and more, in addition to barns. 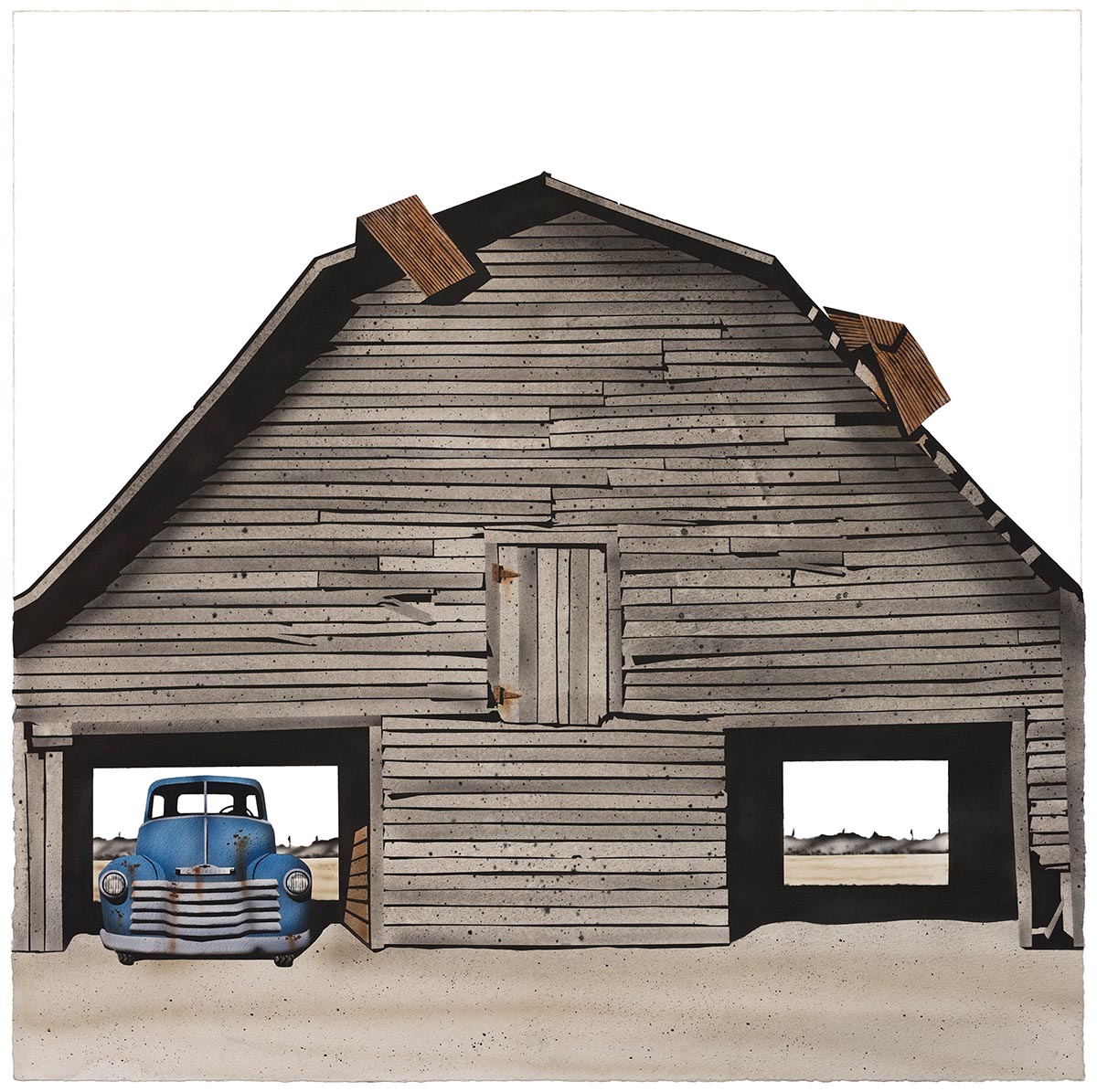 Even early in his career, however, there has been something beautifully bleak and ominous in the shadows of his barn paintings. It is arguably a combination of the artist’s imposed urgency that time is running out and the anthropomorphic quality of his subjects. Think Toy Story if the toys were creepy old farm tools. Dombek paints practically every minute of every day and believes anything else is a waste of time. He noted during our interview that he was painting up until the very moment his assistant, Emily, handed him the phone. “I’m 73 years old,” he said, “I can’t wait.” He’s spent ten to twelve hours a day painting, seven days a week, for twenty-three years since he went full-time.

Knowing this aspect of the artist’s mind, it’s hard not to see a touch of memento mori, the theme of mortality popular in 17th-century Northern European still-life paintings, in his work. Dombek’s depictions of remnants of a dying way of life even exhibit a still-life impression because of the artist’s strategic placement of each object. Madison County Barn with Landscape (2016), for example, depicts an old red pickup truck just inside the alley doors of a tobacco barn. Two small pipe fragments lie in front of the weathered outer wall on the left side. The barn itself is front and center, the angle as if captured by a point-and-shoot camera. The faded background landscape gives just enough information to make out a row of hay bales. The dark-light juxtaposition, created by the intricate line detailing on the barn structure, is dramatic and minimalist and striking. The black interior of the barn is foreboding, but there is something curiously happy about the red truck. We see a similar composition in Union City County Barn and Robertson County Barn (both 2017). 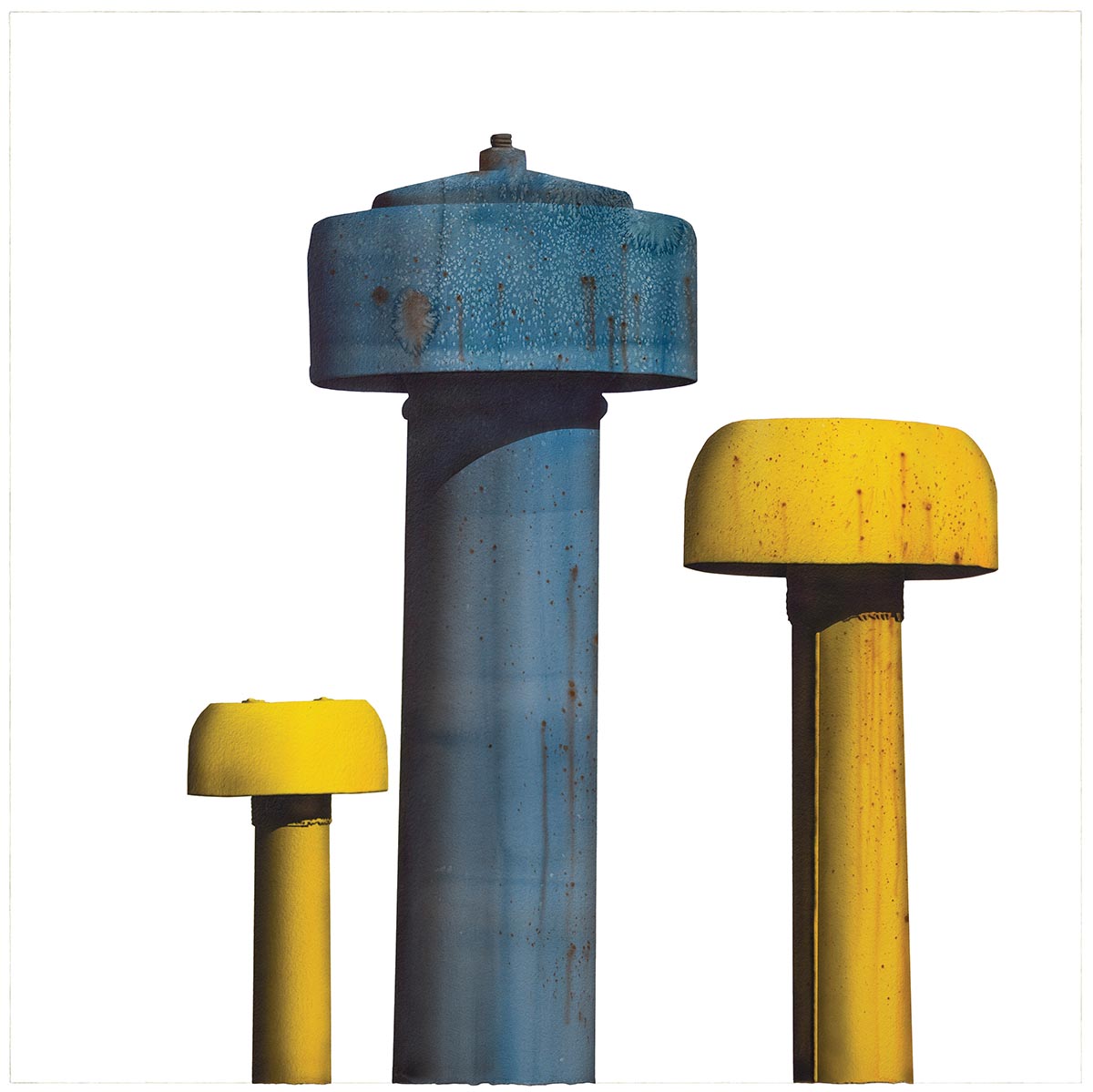 The personality of these strategically placed objects effectively takes the place of humans in Dombek’s work and inspired a whole new series in 2004. Dombek studied the configurations of people in family photography to prepare for Portraits. In this series, we see the personification of rusted cans, mufflers, pipes, and pots, guided by darkly humorous titles, such as The Odd Couple (2004), Tommy Embarrasses Easily (2005), and Twins at Thirty-Nine (2004). Pure Lard and Strong Resemblance to Her Mother (both 2005), which are included in the Lusk exhibition this month, follow suit, depicting various farm equipment arranged portrait-style against a white background. These “portrait” paintings offer a lighter contrast to the barns, not only because of their comedic tone but also their unleashing of more saturated color in Dombek’s repertoire. 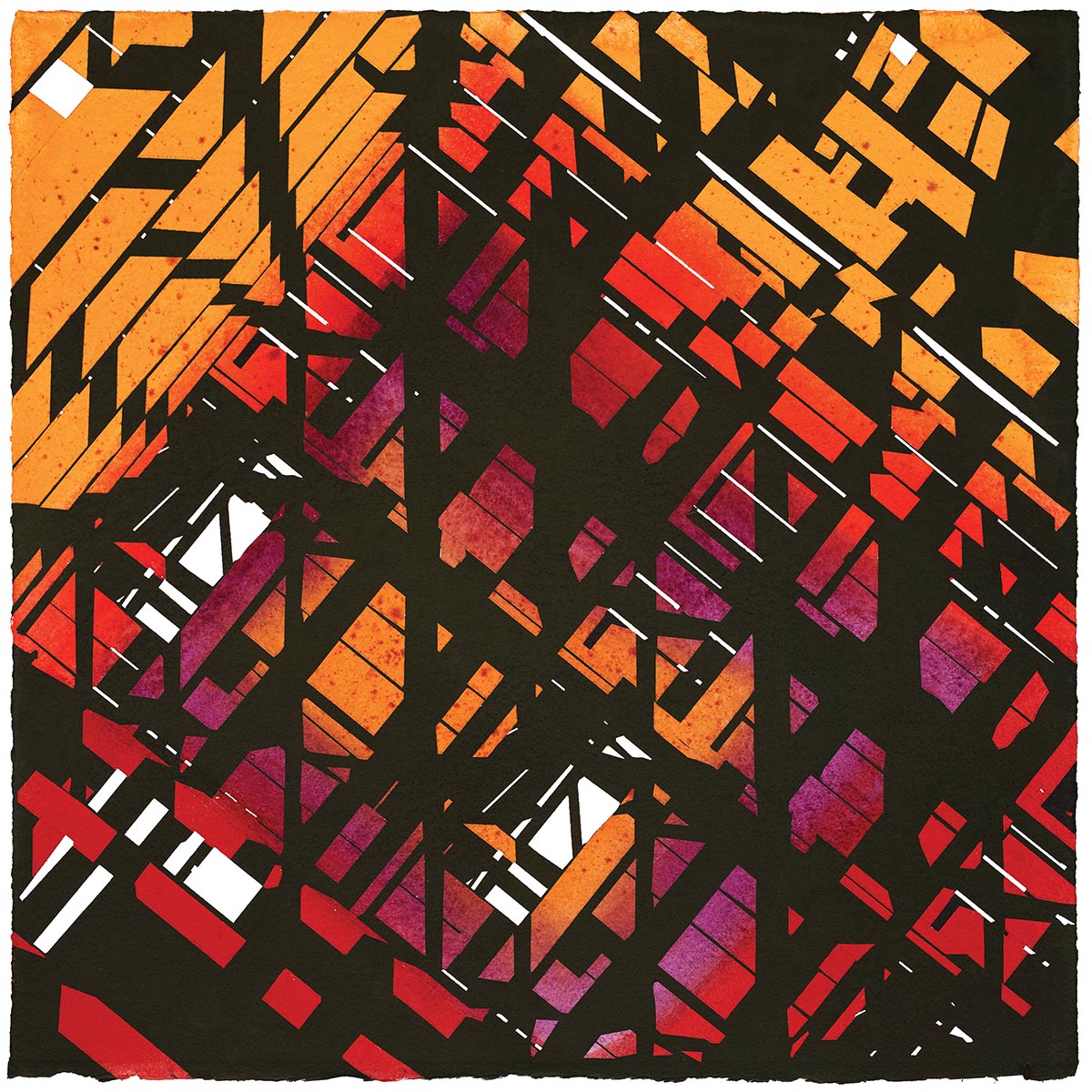 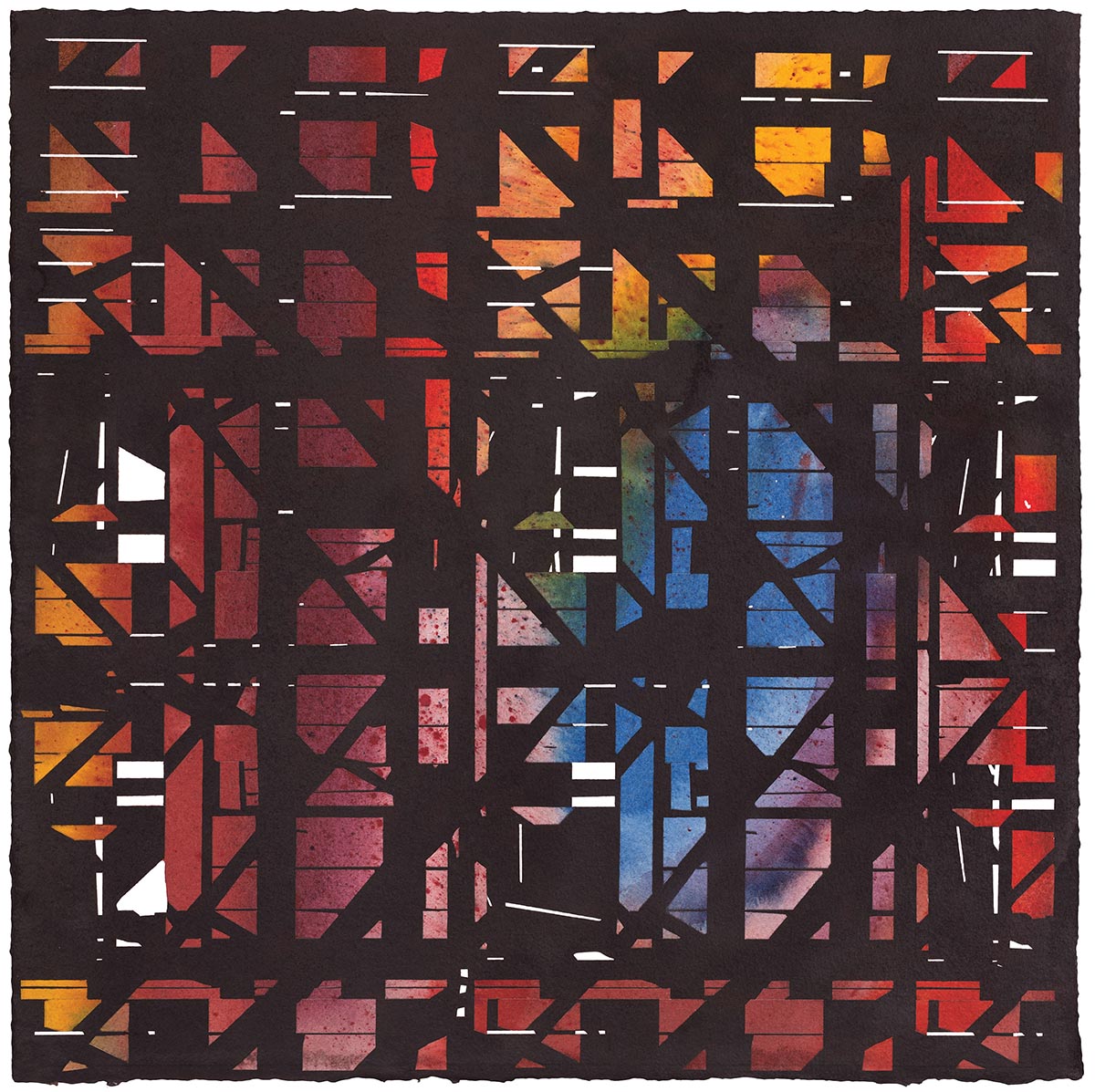 Perhaps the stars of the show this month will be Dombek’s abstract paintings, which are concentrated versions of the linear tension he has mastered. The compositions essentially comprise zoomed-in frames of his larger structural paintings. “Abstraction gives me more freedom than realism. No limitations,” said the artist. AB I (2017) and Against the Wall (2018) both feature bright colors—reds, yellows, oranges, and blues— that appear to grid out the roof beams of a vaulted barn ceiling as they are defined by hard black lines. “The strong element of abstraction in [Dombek’s] work creates a certain distance from the subject, where we need to stand back and reflect on things,” said Adams. “I think there’s also a very personal relationship with the subjects he paints, contributing to the intensity with which he records hay barns.” 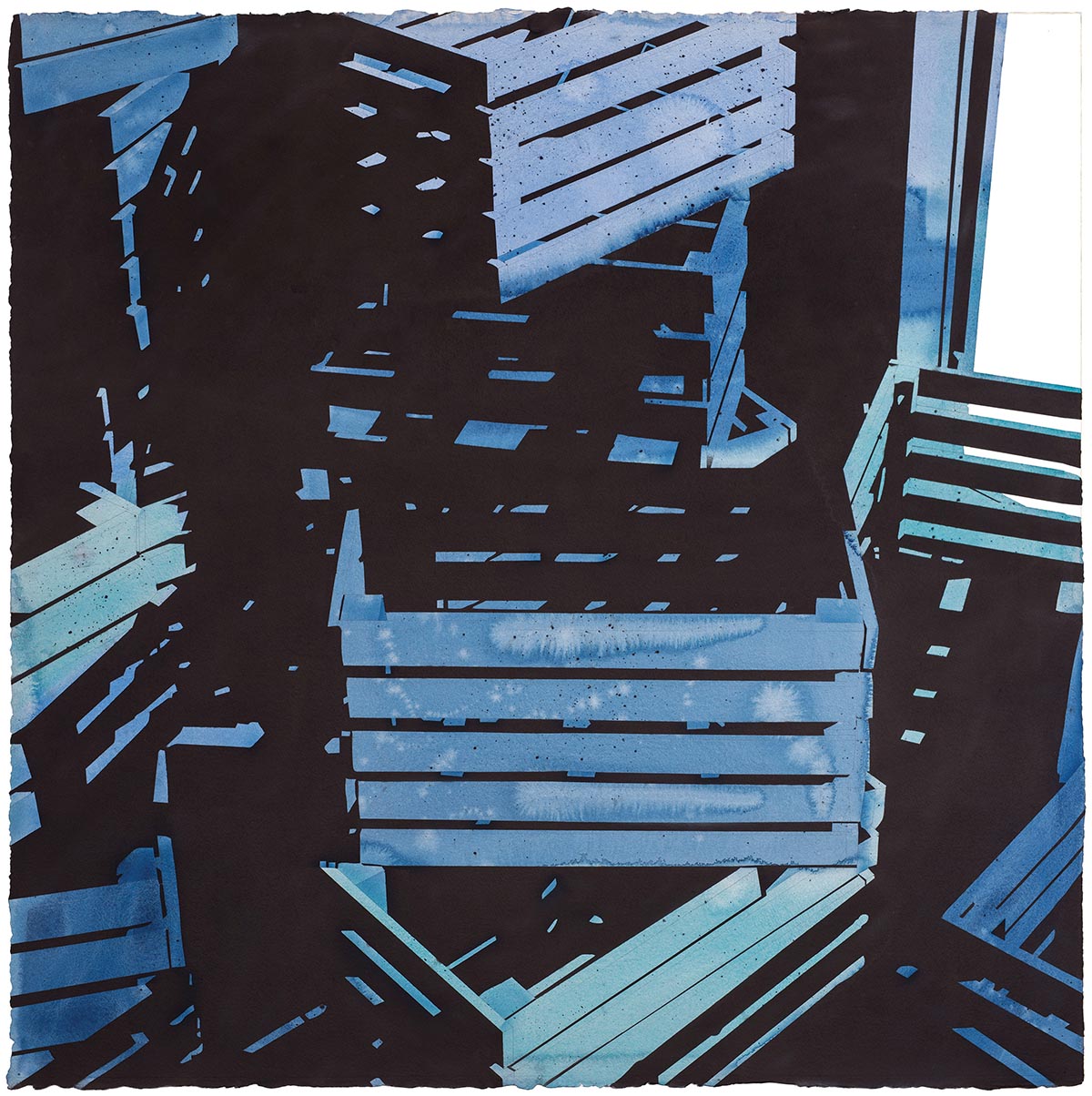 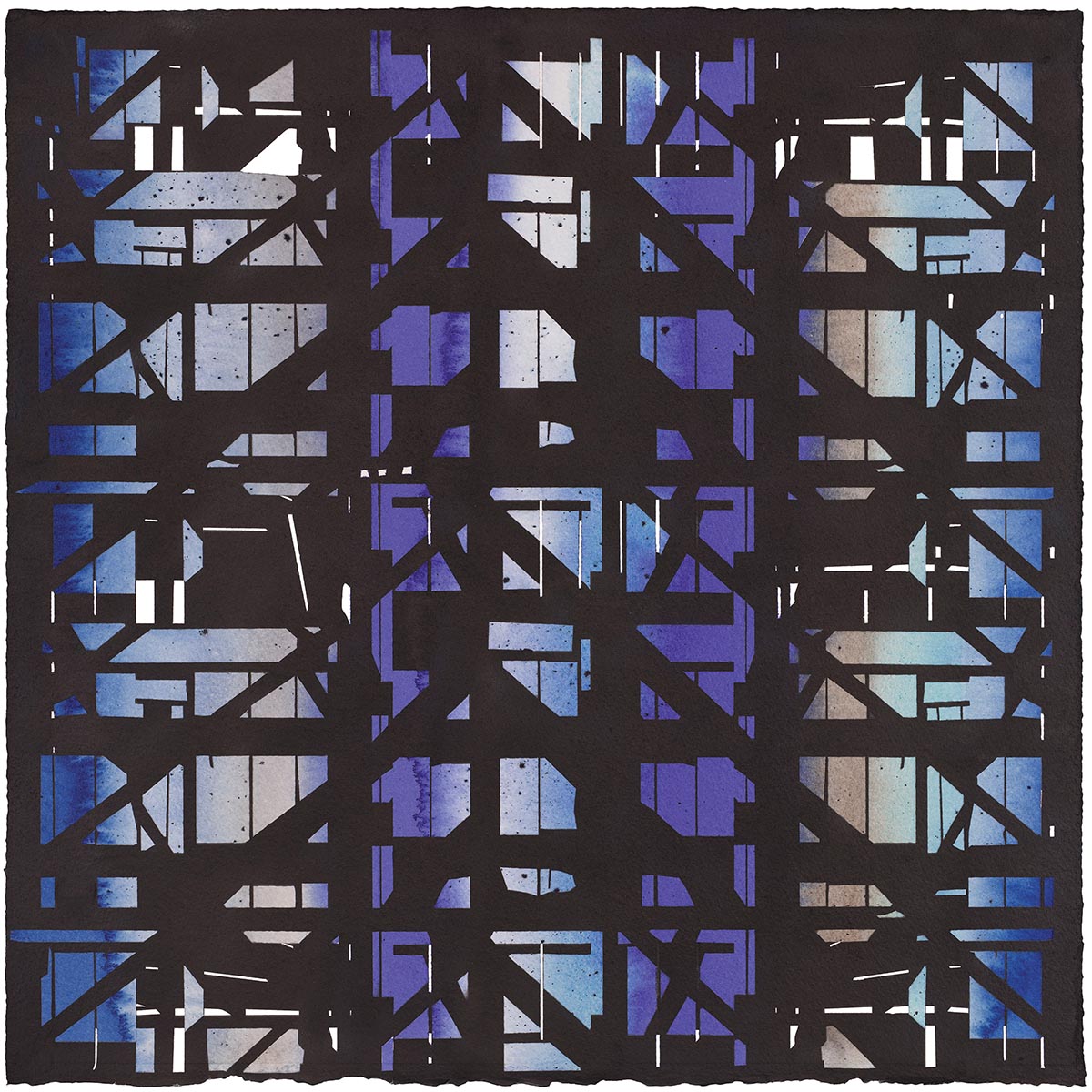 Barns are reflections of their surrounding natural resources, including humans, because they are built from local materials, house local materials, and are built by local people. Aside from all the awards and accolades and hundreds if not thousands of paintings in existence, Dombek knows these people because he is these people. The seed was planted back then, working in his grandfather’s barn, for the future of his artistic career. Even in its dilapidation and sparseness, the barn, in a way, is Dombek’s natural resource, a metaphoric vehicle to show us who we are—the light and the dark sides, however flawed. 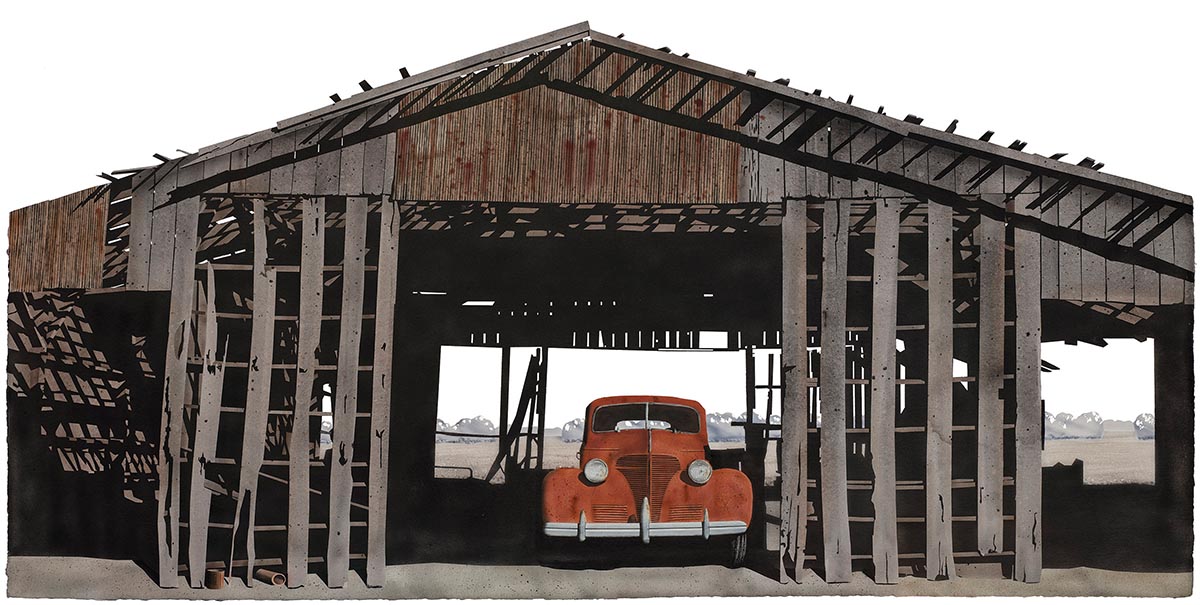 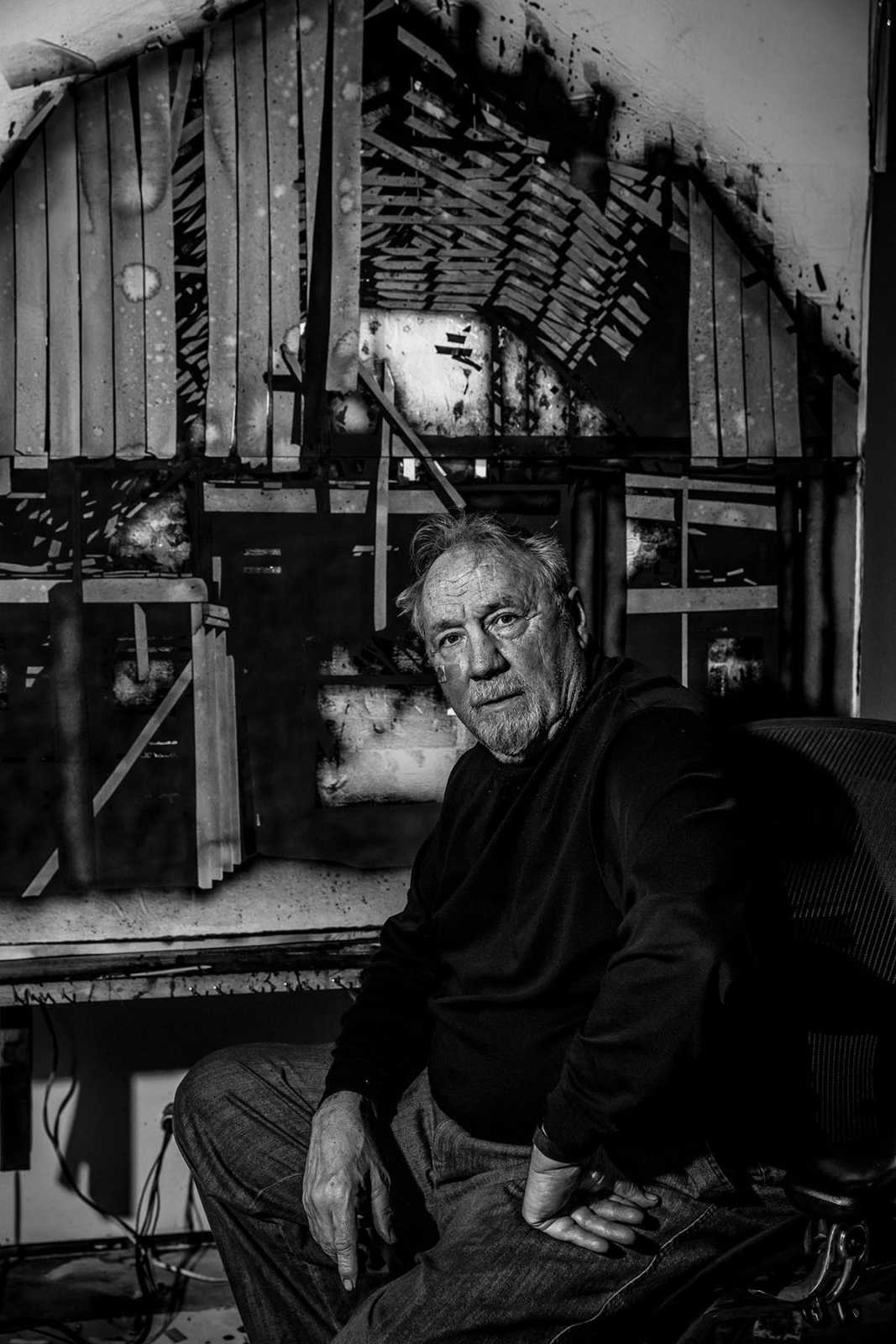 Recent Paintings by George Dombek is on view at David Lusk Gallery May 1 through May 26. An opening reception and book signing is scheduled for May 5 from 5 to 8 p.m. For more information, visit www.davidluskgallery.com. See more of Dombek’s work at www.georgedombek.com.