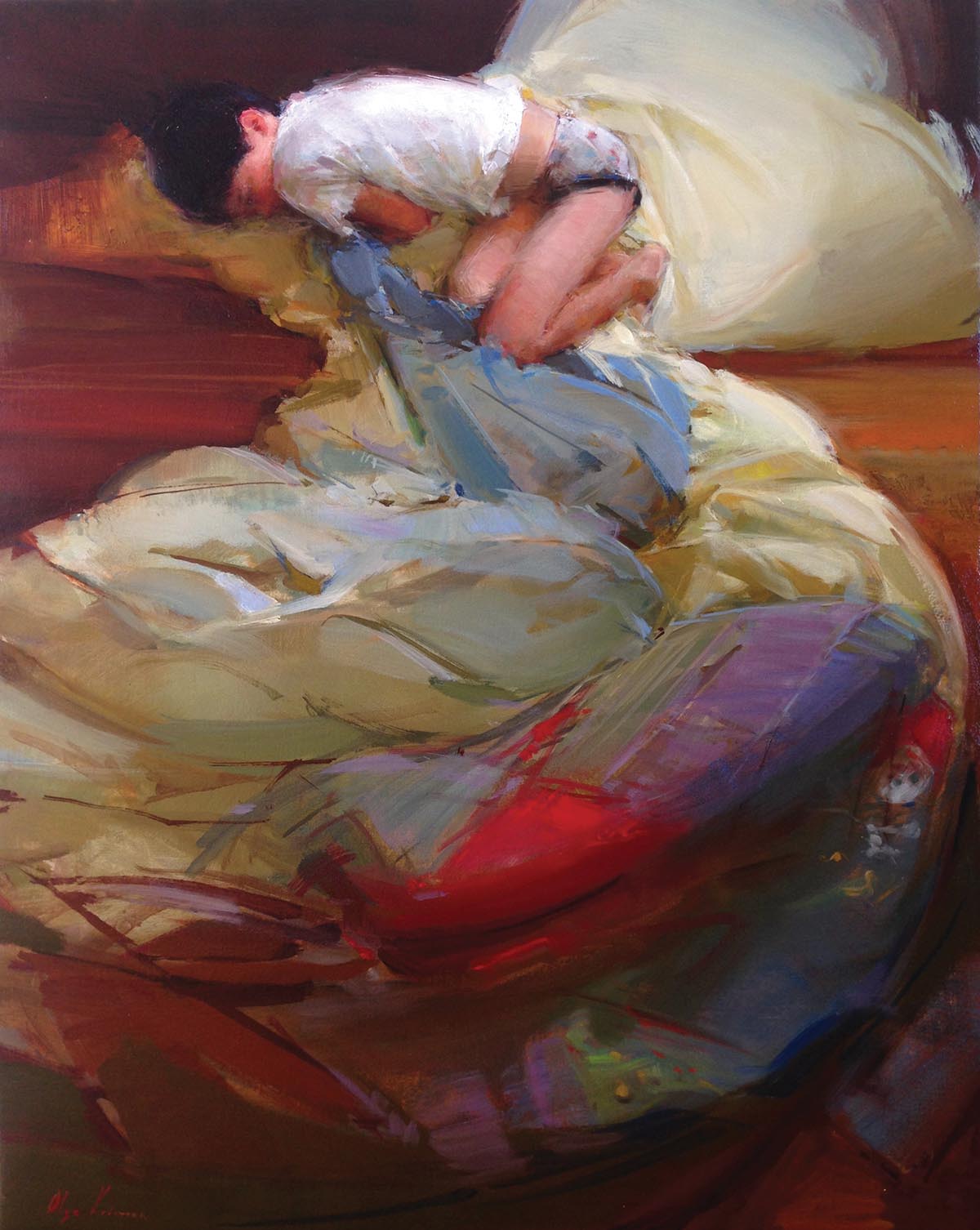 There’s a fascinating word in the Portuguese language: saudade. The Oxford Dictionary calls it “a feeling of longing, melancholy, or nostalgia.” Portuguese writer Manuel de Melo defines it as “a pleasure you suffer, an ailment you enjoy.”

“Saudade.
A feeling of longing, melancholy, or nostalgia. A pleasure you suffer, an ailment you enjoy.”

Saudade describes the melancholy undercurrent of memory in a way that no other word does. Saudade binds us together in our longing for a past we can no longer fully access. If you haven’t felt saudade, you haven’t lived, because it will break your heart.

Olga Krimon creates paintings that elicit feelings of saudade. Her subjects are rendered in spaces carved out of emptiness and solitude; they’re the sort of spaces that make us struggle to remember something ephemeral but real. Hers is serious work, like that of the Russian masters whom she admires: Valentin Serov, Ilya Repin, Nicolai Fechin and Mikhail Vrubel.

Take Krimon’s painting Time Out, for example. A boy sits against a backdrop comprised of bold angles and a color palette in largely restrained tones of blue, green, and ochre. The scene depicts the universal method of non-corporal punishment, as the boy has been sentenced to “time out.” The mood is somber. 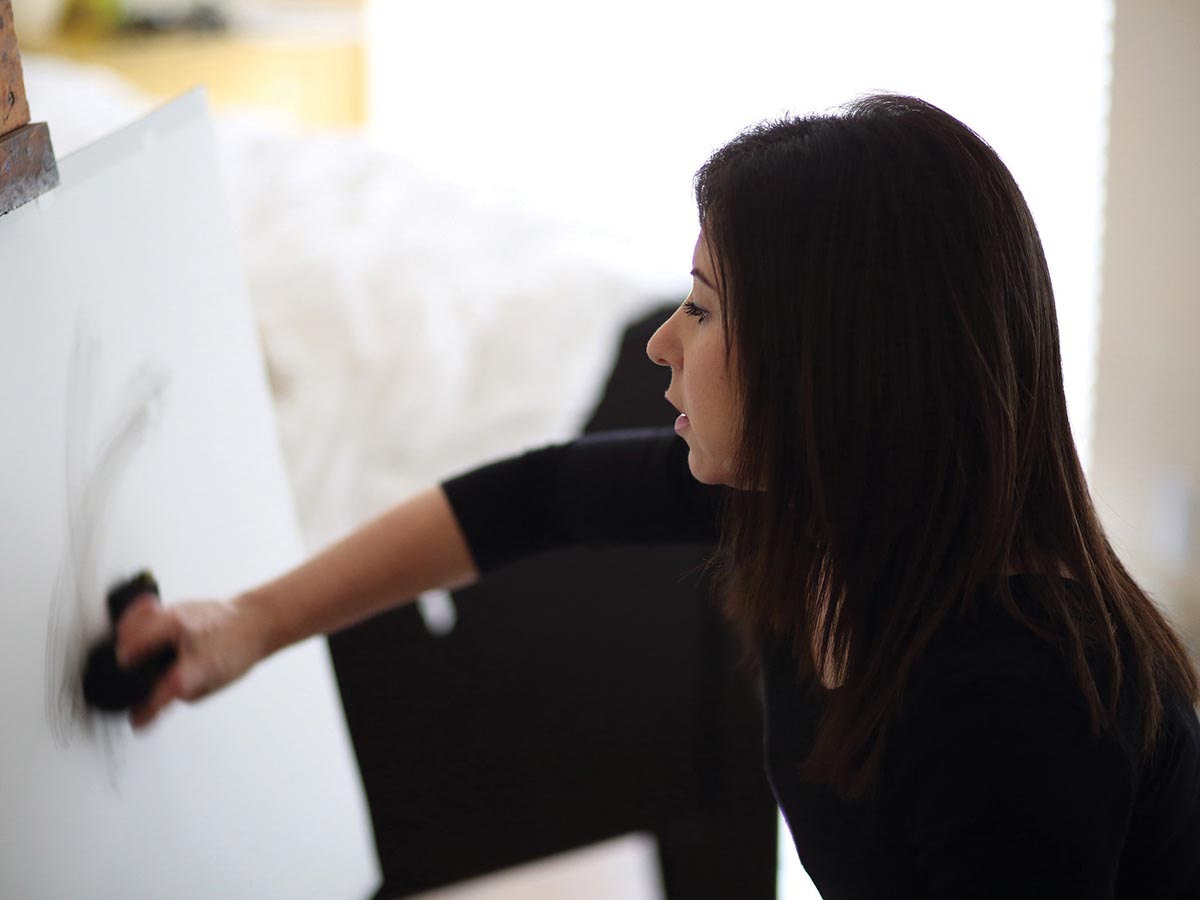 But the pomegranate in the boy’s hand is the painting’s heartbeat, igniting in the viewer a visceral response. The universal experience of eating this particular fruit is one of luxuriating in the wet beads of its seeds. It’s a swoon-worthy experience, that burst of sweet and liquid at each bite. And, like the boy in Krimon’s painting, we surrender to this moment of quiet decadence, the loophole in our “time out.”

In Krimon’s painting Silence, the landscape around the female subject is swept away. Where is she? The geography—even the method of travel—has been obscured. The world whizzes past her through the urgency of Krimon’s brushstrokes. But the viewer interprets it in his or her own way. This woman could be on a ferry, traveling to the salt-tinged air of some distant island. She could be on a wagon, traveling to the golden fields of a wheat farm. We don’t know. Yet we feel it. Saudade is in action yet again. 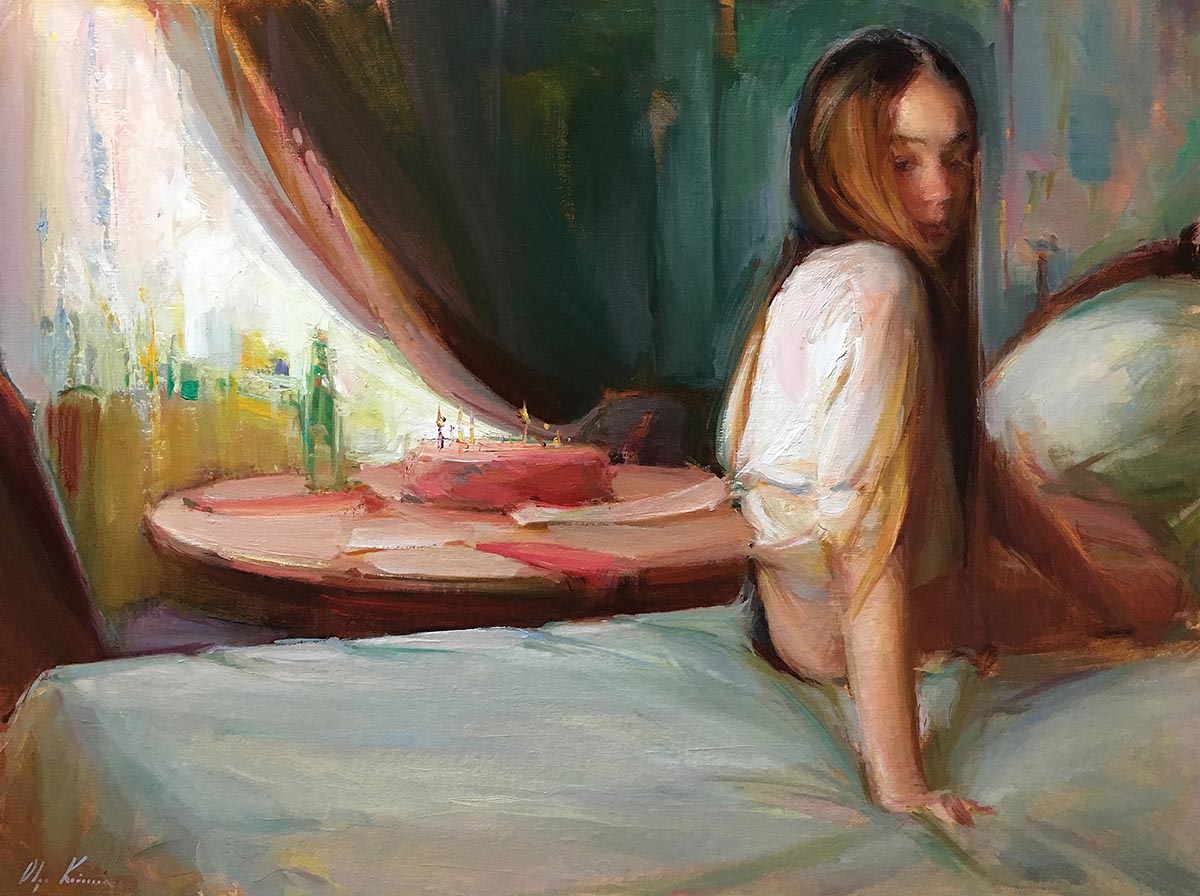 “There’s a longing for something,” Krimon says of her work. “And the feeling of ‘I’ve seen it somewhere . . . I’ve seen it in my dreams.’ I can relate to that.”

She wants the viewer to absorb the emotion of her work and also be drawn into a painting—and kept there —by lines both curvaceous and diagonal.

“The pieces I admire most are the ones with a strong composition that give me that longing,” she says. 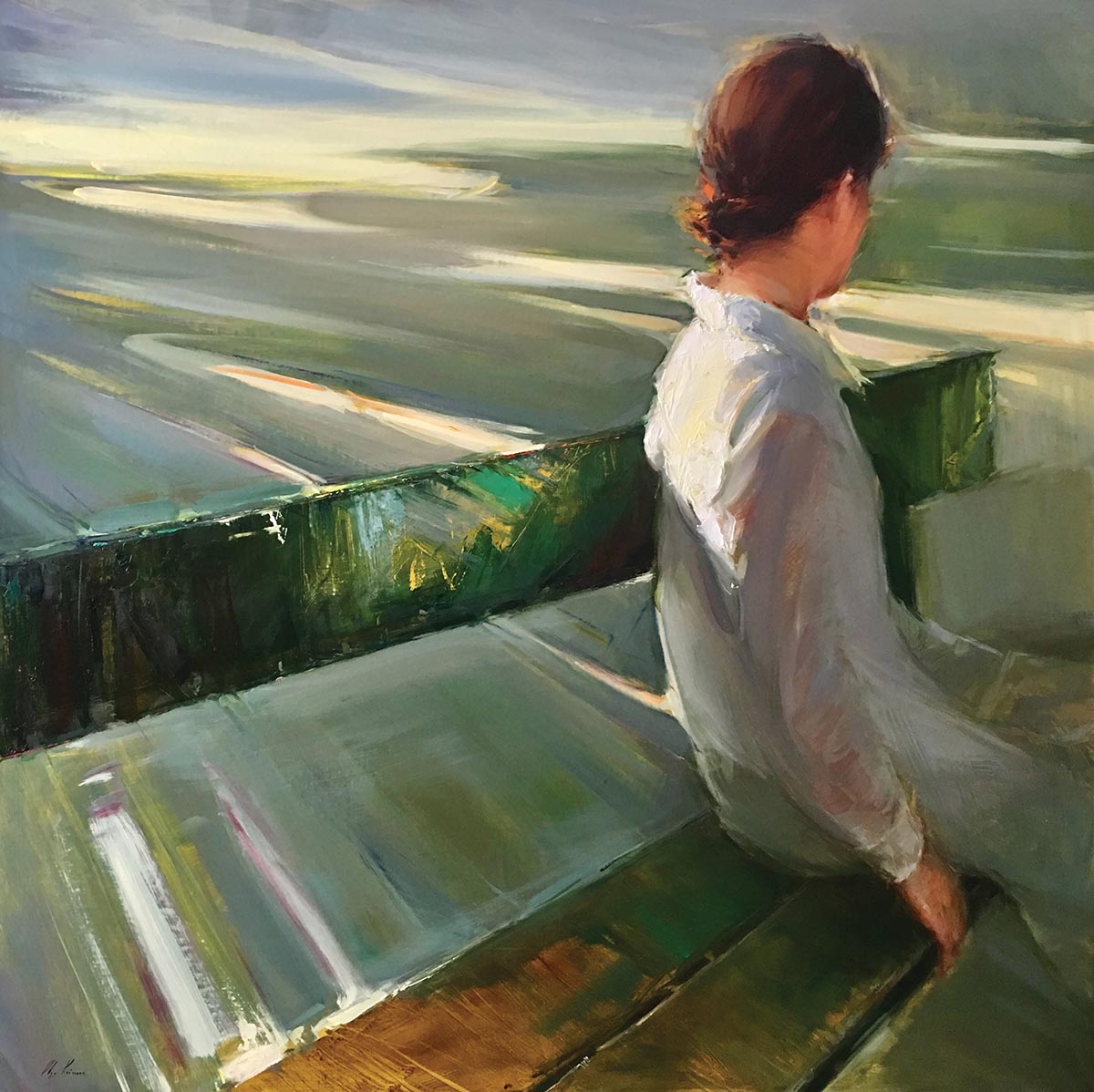 Krimon has an interesting background. She grew up in Communist Russia at a time when art wasn’t a career to which youths aspired. During her teen years, Krimon attended a four-year academic art school in Russia. She loved creating art, but she felt a tug of resistance.

“Honestly, I just thought, realistically, what kind of career is there in art?” she says. “It was Russia under Mikhail Gorbachev’s perestroika of the late 80s. That career was kind of a dead end. A fine-art career didn’t exist, to my knowledge. I didn’t know anyone who pursued it.”

Krimon attended Odessa University to study English and literature and become an interpreter. “I took a differing path,” she says. “I just put everything down and became practical.”

It was a choice she would grow to regret. For the last ten years, Krimon has masqueraded in her career, taking on the guise of a corporate employee specializing in information technology. Yet she continued to paint in her spare time. In addition, she studied drawing with Glen Orbik, an illustrator known for his noir style, and painting with Jeremy Lipking, one of America’s most highly regarded realist painters.

“Nothing else was making me happy,” she says. “For a long while, I had a double life. I had a corporate life and at the same time I was working with galleries and getting awards. No one in the art world knew I was working corporate. I hid the fact that I was leading a double life.” 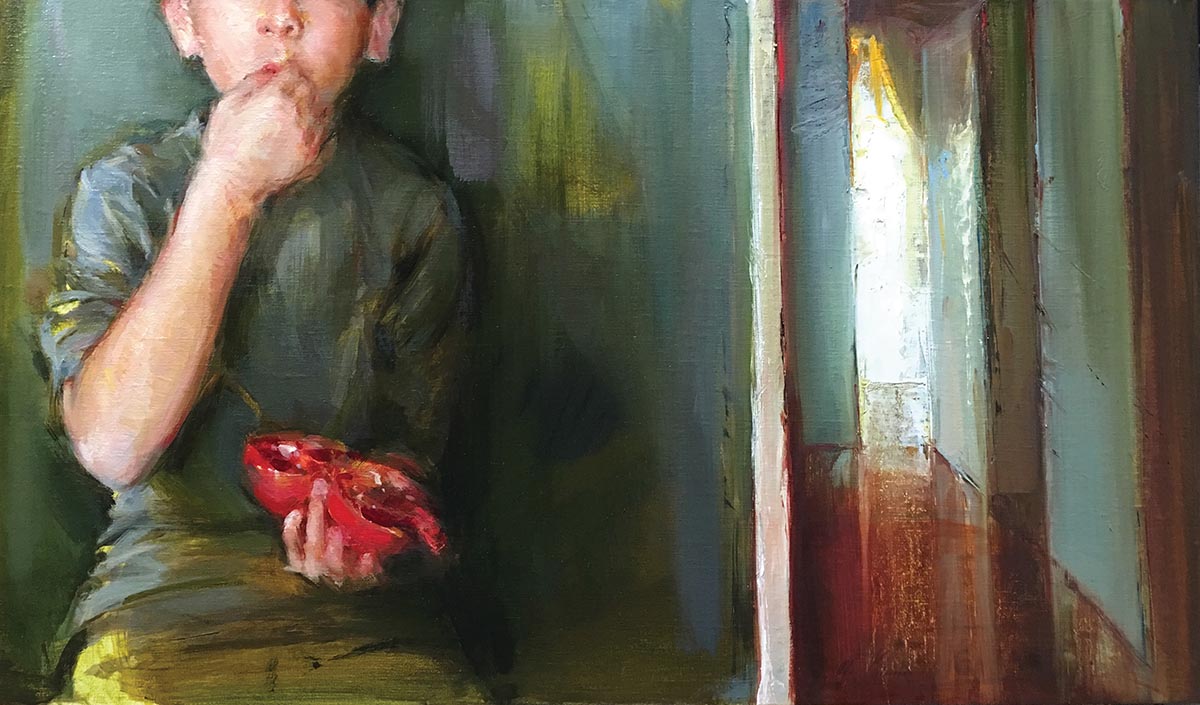 Eventually, this double life caused fissures to form, and Krimon made what many would consider a leap over a cavern without a toehold in sight: She quit her job. She has since fully embraced art as a career and is represented by Leiper’s Creek Gallery. 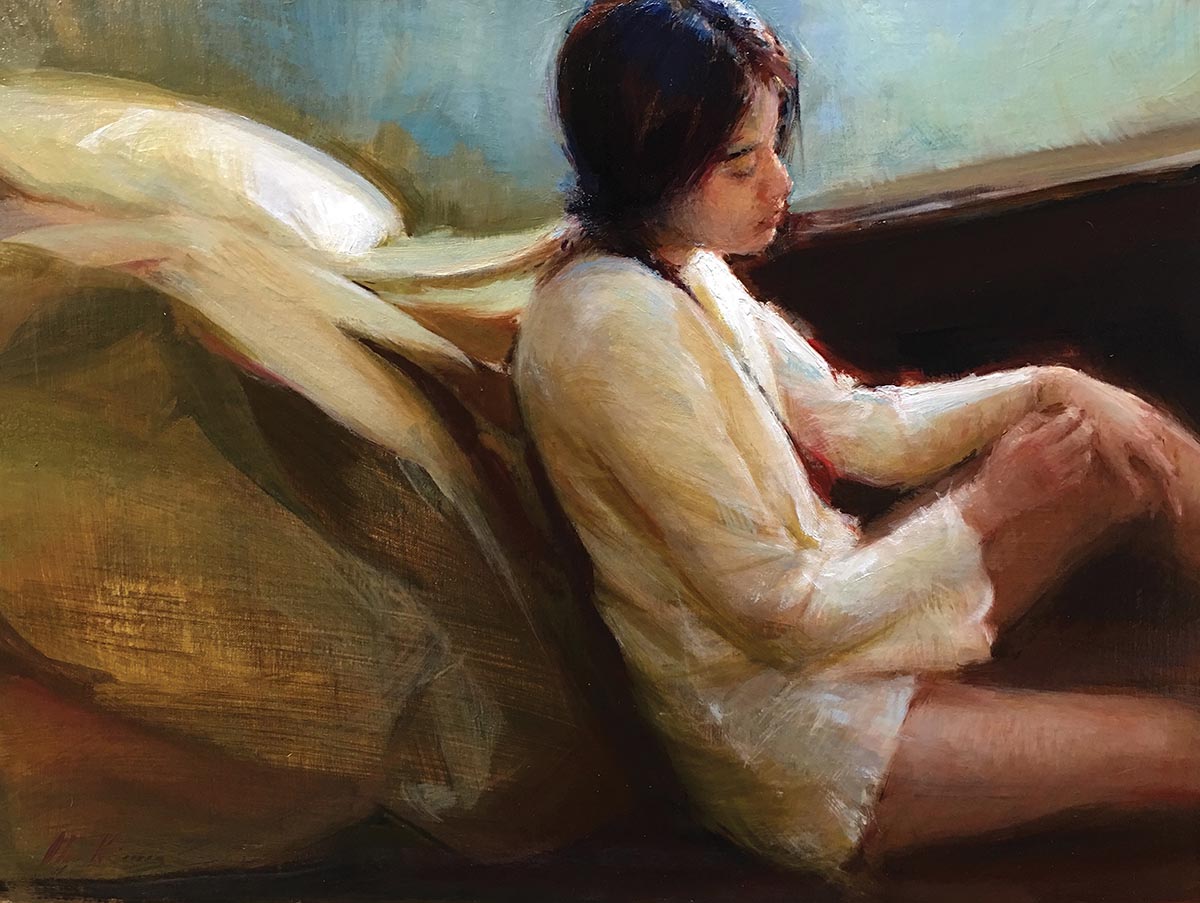 “When I quit my job, my whole organization and my boss thought I was crazy,” Krimon says. “And maybe I am. But I’m the happiest I’ve ever been. When it’s not you, it’s not you. You have to do what you have to do. It’s funny how things worked out.”