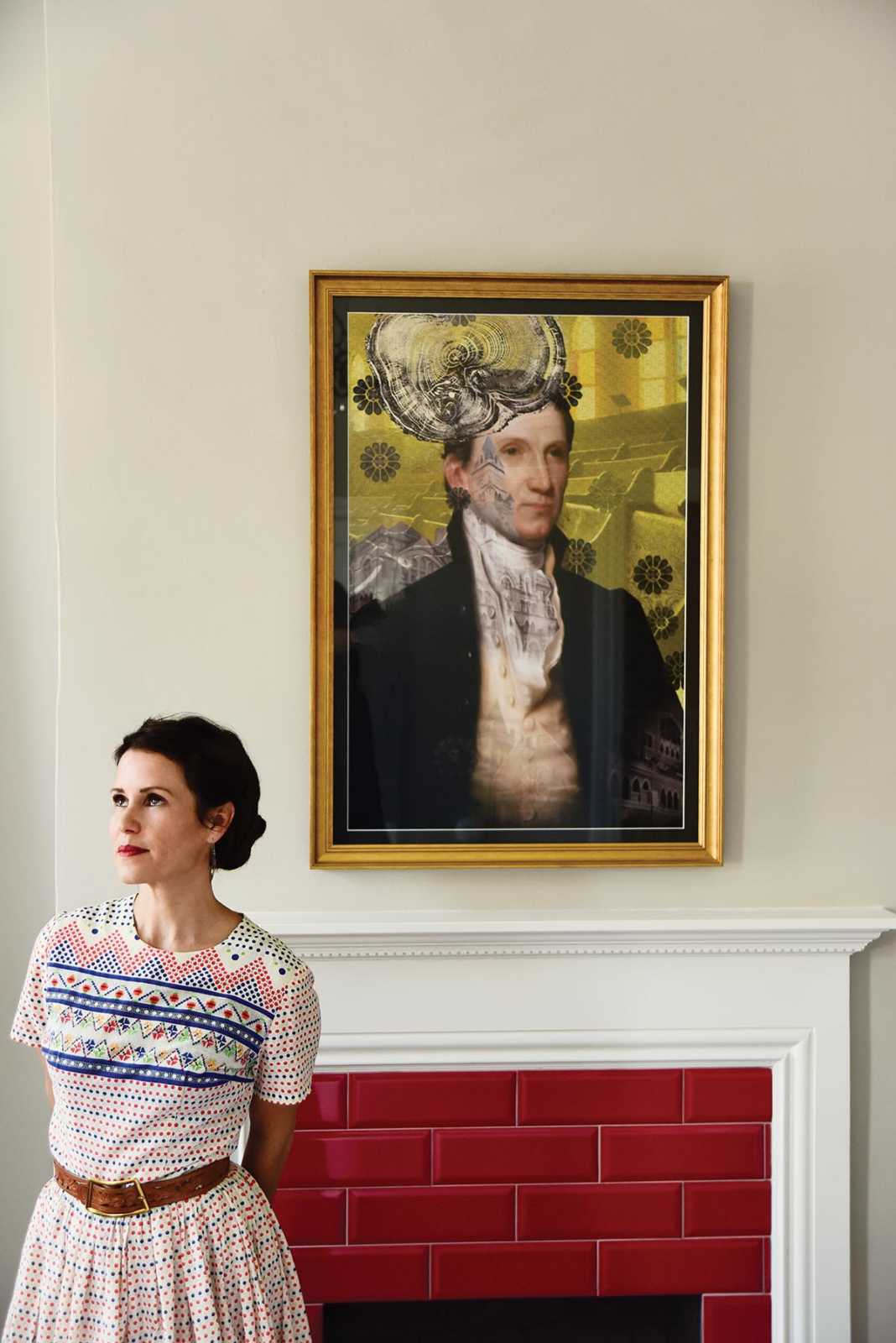 “I have a really vivid memory of growing up in Nashville,looking over downtown and the fireworks display, with a certain song on the radio; the crowd was wild but happily sprawled out on their car hoods, and it was sticky hot in that parking lot.” Caitlin Mello left and has returned to the central basin, citing years in New York and Los Angeles as lifetimes spent outside of it. In those she filled student, bilingual journalist, fashion editor, and other posts, wandering progressively further from writing into visual roles with each career move. Having been discouraged from applying to art schools by her adoptive father, a graphic designer, she resolved to learn design on her own. “People would ask me if I could do stuff and I would lie and say that I could, and then go teach myself how to do it.”

Now working locally as a graphic designer, she’s been commissioned by the Germantown Inn to create six presidential portraits. Given minimal instruction (“We want it to be presidents, and we want it to be wild”), Mello has conjured the ghosts of our forefathers as only a wayward daughter could. The images are playful and teasing, with flashes of hot-pink irreverence.

“I was just kind of fusing all these elements of the South and the push and pull between what is the South,” says Mello. “These pieces were the themes of old and new, and ‘Conservative South’ versus ‘New South’ kept coming up. Even the [Germantown Inn] was like that—this old building with a new take on it. So I wanted to do all of them with that sort of theme.” 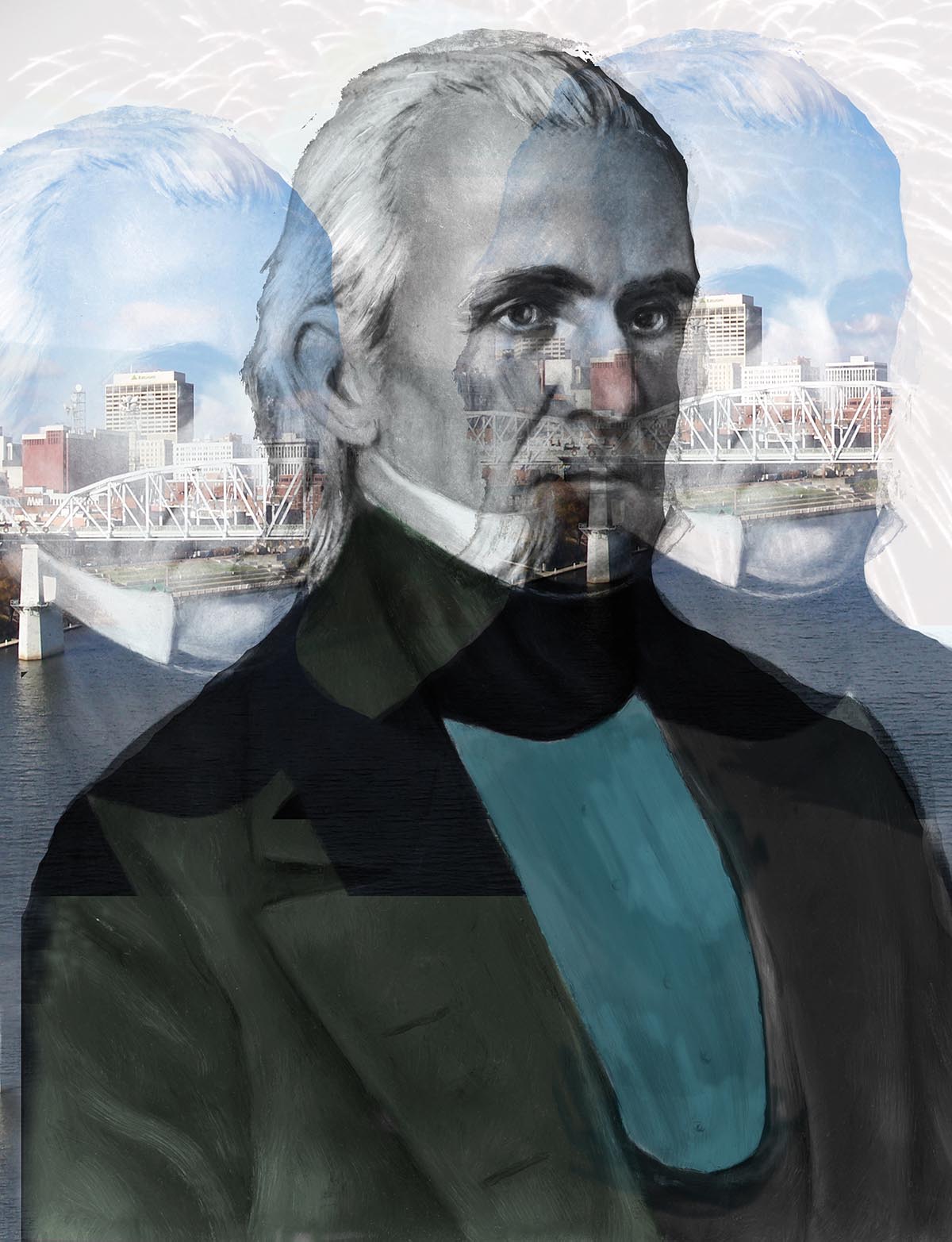 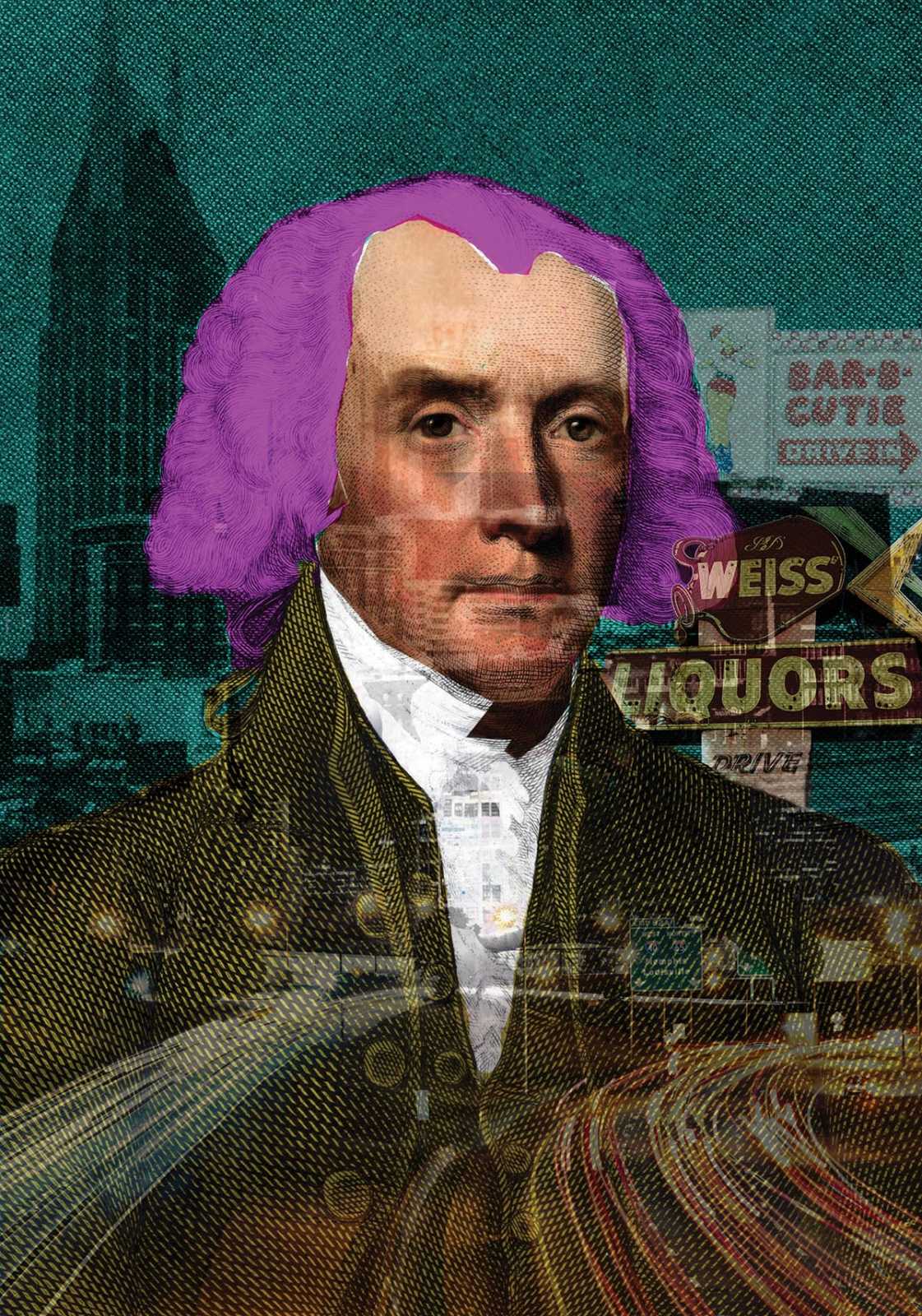 But this series is also about how politics and a sense of place are inextricably linked. “When I was growing up, everyone was from Nashville,” Mello says. Throughout the portrait series she waxes nostalgic, tucking transparencies of local liquor stores, barbecue joints, and concert halls into the images like Easter eggs for the town loyal to find. With that, and given the popular native pushback against Nashville’s growth over the past ten years, it’s surprising to hear Mello defend what this city has become. “Growing up, seeing so much discrimination and racism and prejudice —yeah, I would take New Nashville any day over that. It still exists, but not as much as it used to.”

Her inclusive attitude charges the collection on a visual level, as well. “That was the whole idea of all of it,” she explains, referring to the layers of transparencies she’s enmeshed, “It was the fusion of all these different elements that come together to make a person, and a place. I lived in Peru and Barcelona and D.C. and New York and L.A., and my adopted stepdad was from Pakistan and my real dad was from Portugal, and my mom’s Southern, and it was the idea that every person has so many elements to them that come together, and you can see some clearer than others. And some things are really obvious, and some things are a little bit hidden.” Her approach to such sticky subject matter is refreshingly laid back. The results are bright, funny, and even have a certain anthemic quality, like listening to Ween in the back of your friend’s dad’s Chevy Blazer. 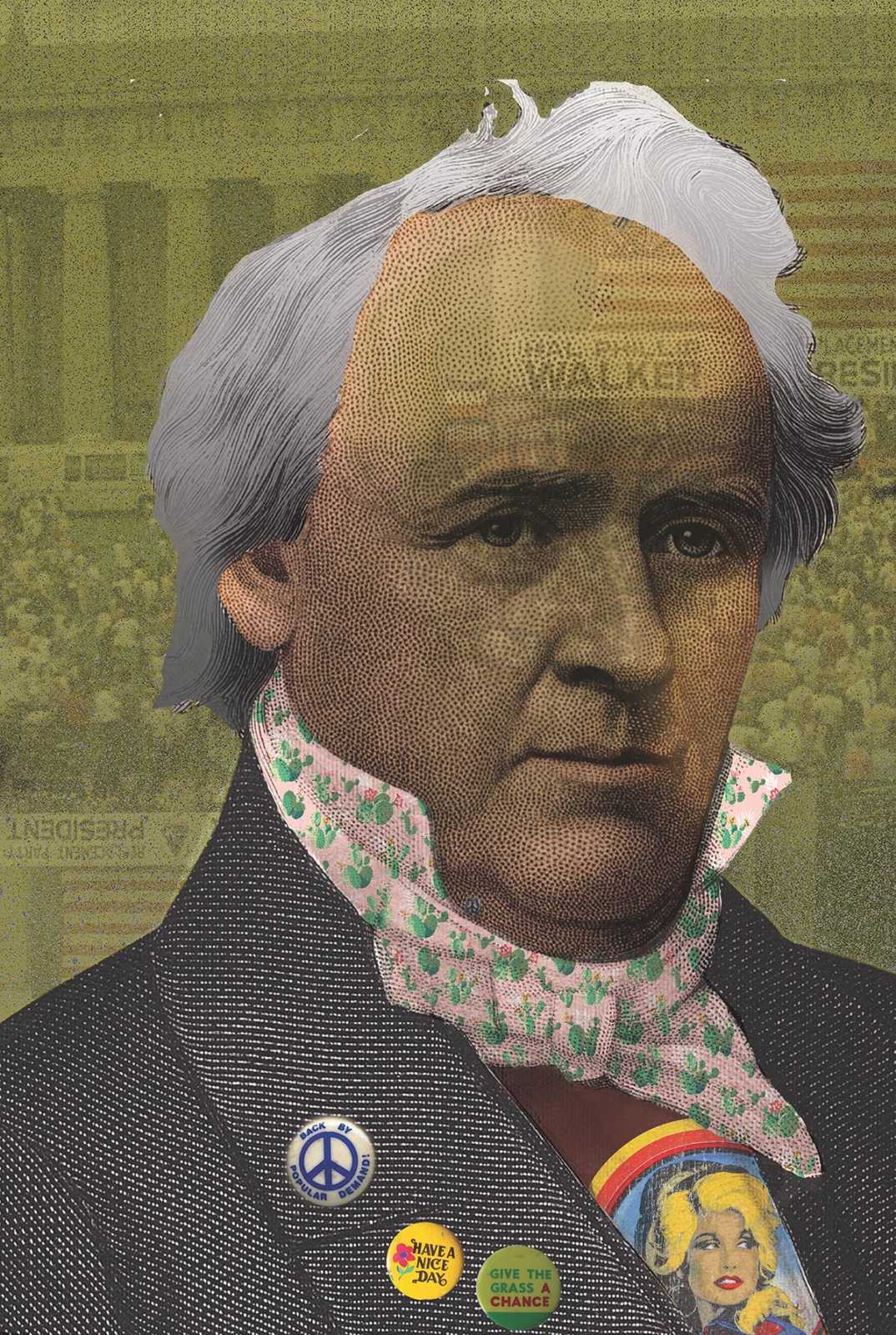 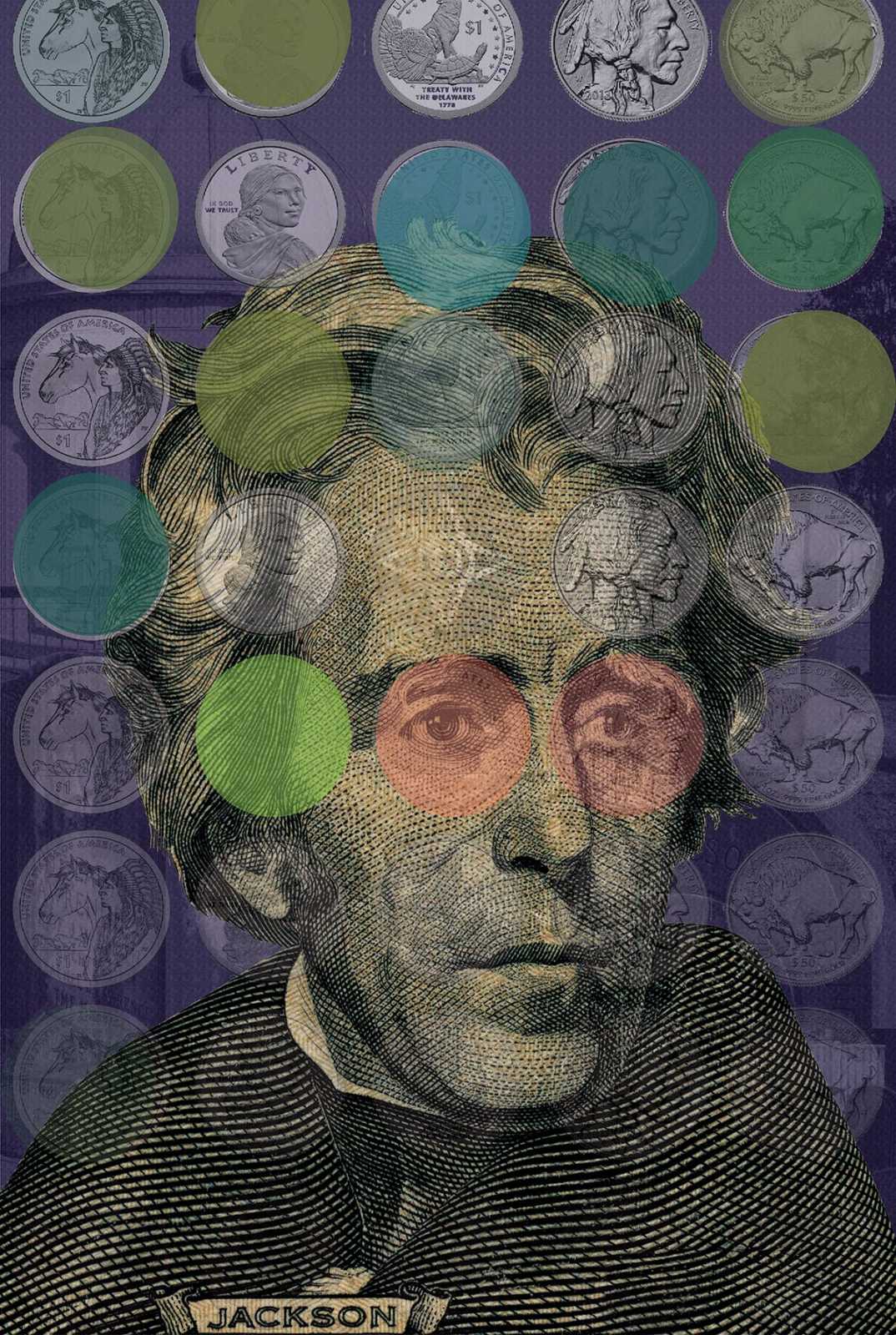 This is, in part, because Mello’s self-confidence, her cheeriness and charm, are a ninja star. “I did struggle with how much of a statement can I make?” In the interest of inspiring spirited dialogue rather than an automatic argument, Mello had difficulty deciding how far to lean into her personal politics. “A part of it was like, I’m going to make certain statements on things. How far can I push the envelope with someone else’s hotel? I don’t want them to feel like I’m putting them on the spot of having to agree with everything that I’m saying, but this is important to say.” The issue threatened to fracture the project early on.

“They wanted me to do Andrew Jackson, and . . . I was like, I don’t know if I can do Andrew Jackson. The Trail of Tears is one of the most sad things that I can think about.” Despite her reservations, Mello proceeded with the assignment, though not without commentary: “Like, that’s a target on his head.”

Keep an eye on this one. The artist admits that although she has always been political, her expression of it has intensified since our current president took office. “[Germantown Inn’s] opening was before the election. But then after the election . . . the gloves came off.” She pauses. “I’ve had intense guilt about not taking them off sooner.”